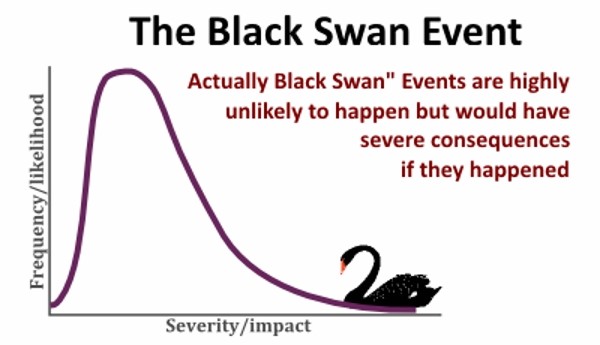 What exactly Is a Black Swan Event?

There is near universal agreement that the Brexit – and the walloping it gave the market – was a black swan event. But actually defining what a black swan is can be a challenge.

And a black swan need not always be something bad. Sure, a meteor falling out of the sky and hitting your house would be a black swan event. But so would be an inheritance check for a million dollars from an aunt you never knew you had. Both would be completely unexpected… and both would have major impacts on your life.

Trader, professor and financial writer Nassim Nicholas Taleb made “black swan” a household word (at least in households that regularly debate financial topics… like mine) and gave it its current meaning, but the expression has been around a lot longer for something that was assumed to be impossible. The first recorded use of black swan as this kind of metaphor dates to the Roman Empire, and it was a common expression in 1500s London.

Until 1636 – when European exploration of Australia was underway – all swans were presumed to be white. No one had ever seen a black swan, so it was presumed that none existed.

If you want to get really wonky, the black swan is an example of the problem of induction, or trying to draw general conclusions from specific observations. In plain English, seeing a thousand white swans and not a single black swan doesn’t “prove” that no black swans exist. And just because something has never happened before doesn’t mean it can never happen. Up until March of 2000, it was popularly believed to be impossible for a tornado to hit a major, urban area. The thinking was that the skyscrapers affected the wind patterns in such as a way as to make a tornado touchdown impossible. Well, then on March 28, 2000, an F3 tornado touched down on downtown Fort Worth’s Main Street and proceeded to obliterate one of the largest skyscrapers in the city. (I was living in Fort Worth at the time, and distinctly remember cowering in the basement of the building I was in…)

Let’s get back to Nassim Taleb. In black swan of the financial variety, Taleb says you need to have three conditions in place:

And this is where you get back to the fun parallels with finance. No country has ever left the European Union before… and no opinion poll or betting market suggested it was possible. So the financial markets assumed a UK vote to leave to be impossible.

Well… it turned out that it wasn’t impossible, and the impact was definitely outsized. No one knew at the time – or knows now – what the full impact of Brexit will be once all is said and done. And as for the narrative, after the fact it became “obvious” that Brexit would happen because of the dissatisfaction of older, blue-collar British voters, the rise of Donald Trump in America or any number of other reasons.

So, Brexit does indeed make the cut as a black swan.

All of this is fine and good, but if black swans are always unpredictable and obvious only after the fact… what’s the point of even talking about them?

Even if you can’t anticipate individual black swans, you can definitely take a few simple steps to “black swan proof” your portfolio… or at least come close.

First, don’t make the assumption that something can’t happen simply because it hasn’t happened yet. Don’t be overconfident based on your limited observations.

Second, always have a little portfolio insurance. That can mean different things to different investors, but as a general rule it means you should have a few assets in your portfolio that zig when the market zags. Taleb himself made enough money in a single day to walk away from Wall Street forever. He was “long volatility” on the day of the 1987 stock market crash, and walked with millions when the market cratered.

Finally, beware of debt. Excessive debt has been the death of many a good trader. The people who ran Long-Term Capital Management were geniuses. They were quite literally the men who wrote the books on quantitative finance, a who’s who list of brilliant academics. And in 1998, their hedge fund blew up in spectacular fashion when a black swan hit. Russia defaulted on its debts, which was something no one expected. It caused investors to dump everything related to emerging markets and run for the hills.

Long-Term Capital Management went out of business, not because it made bad trades, but because it borrowed far too much money to make them. Had the professors simply borrowed less, they would have been able to ride out the storm and live to trade another day.

Excessive leverage can turn a safe investment into a risky one and make you more susceptible to black swan risks. So simply avoiding debt will do wonders for making your portfolio black swan resistant.