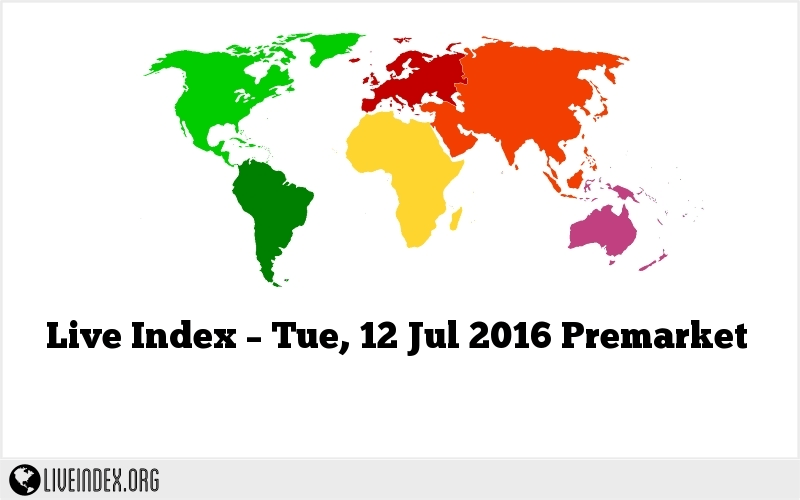 Sep E-mini S&Ps (ESU16 +0.46%) are up +0.52% at a fresh record high and European stocks are up +1.79% at a 2-week high. U.S. stocks received a boost from Alcoa which is up over 4% in pre-market trading after it started off Q2 earnings reporting season by reporting higher than expected Q2 earnings. European stocks found support with a rally in automakers, led by an over 4% jump in Daimler AG after it reported a 5.6% increase in adjusted earnings. Also, Home Secretary May is prepared to take over as the UK’s next prime minister, which removes some political uncertainty in Britain. Asian stocks settled higher: Japan +2.49%, Hong Kong +1.65%, China +1.82%, Taiwan +0.63%, Australia +0.30%, Singapore +0.89%, South Korea +0.06%, India +0.66%. China’s Shanghai Composite climbed to a 2-1/2 month high on the heels of the rally in the S&P 500 to a record high. Also, China International Capital Corp and CIMB Securities Ltd. said that China’s pension funds, which have about 2 trillion yuan ($ 299 billion) available for investment, may start to deploy some of their holdings in securities including equities in the second half of this year. Japan’s Nikkei Stock Index rallied to a 2-week high as the yen fell to a 2-week low against the dollar, which boosted exporter stocks.

Speaking in Sydney, Cleveland Fed President Mester said the “the timing of the next Fed rate hike is going to depend on how the economy evolves.” She added that she’s “comfortable that we’re not behind the curve, but that she thinks a gradual upward tilt for interest rates is appropriate for the U.S. economy.”

Alcoa (AA +3.26%) rallied +4% in pre-market trading after reporting Q2 adjusted EPS of 15 cents, which was better than the consensus of 9 cents. Q2 revenue of $ 5.30 billion was close to the market consensus.

Oracle (ORCL -0.22%) was upgraded to ‘Outperform’ from ‘Market Perform’ at BMO Capital Markets.

Astec Industries (ASTE +1.36%) was downgraded to ‘Hold’ from ‘Buy’ at BB&T Capital Markets.

Swift Transportation (SWFT +0.96%) and Marten Transport Ltd (MRTN +0.09%) were both downgraded to ‘Sector Weight’ from ‘Oveweight’ at Keyblanc Capital Markets.

RR Donnelley (RRD +2.33%) rallied 5% in after-hours trading on a report by Bloomberg that Xerox (XRX -0.42%) is in early-stage talks to acquire Donnelley.

Tesla (TSLA +3.69%) fell -1% in after-hours trading on continued concern about the WSJ report that the SEC is considering whether Tesla failed to report a recent crash as a material event.

Sep E-mini S&Ps (ESU16 +0.46%) this morning are up +11.00 points (+0.52%) at a fresh record high. Monday’s closes: S&P 500 +0.34%, Dow Jones +0.44%, Nasdaq +0.64%. The S&P 500 on Monday rallied to a new record high and closed moderately higher on support from the +4% rally in the Nikkei index after Japanese PM Abe’s LDP party in Sunday’s elections gained a supermajority in the upper house of parliament, ensuring a new fiscal stimulus program totaling as much as $ 200 billion. U.S. stocks also rallied on reduced UK political uncertainty and indications that Brexit will move more quickly after Theresa May’s opponent in the PM race dropped out, allowing Ms. May to become PM by Wednesday.

Sep 10-year T-note prices (ZNU16 -0.25%) this morning are down -10.5 ticks. Monday’s closes: TYU6 -20.5, FVU6 -11.75. Sep 10-year T-notes on Monday closed sharply lower on the prospects for a large Japanese fiscal stimulus program and on reduced Brexit uncertainty as Theresa May will become Prime Minister by Wednesday, much sooner than expectations of September. T-notes were also undercut by reduced safe-haven demand with the rally in the S&P 500 index to a new record high and by Kansas City Fed President Esther George’s (voter) resumption of her campaign for higher interest rates following last Friday’s strong payroll report.