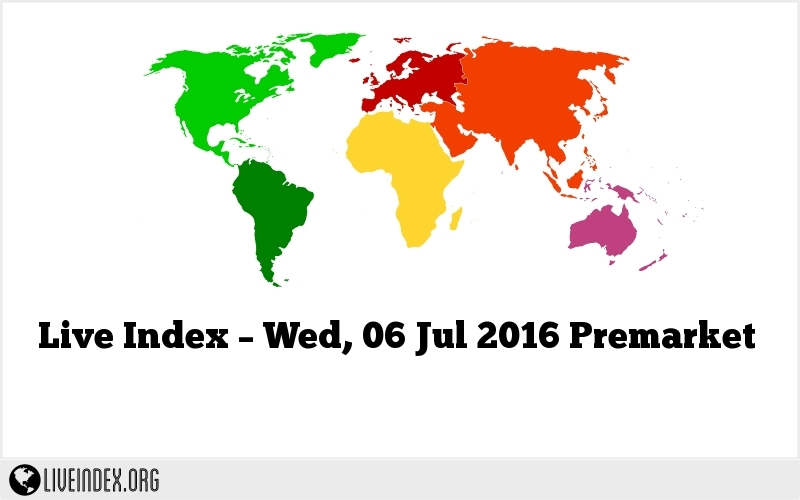 Sep E-mini S&Ps (ESU16 -0.61%) are down -0.67% and European stocks are down sharply by -2.09% on concern the fallout from Brexit will slow global economic growth. Late Tuesday, New York Fed President Dudley warned that the risks from Brexit could escalate if it triggers turmoil beyond the UK. A decline in European bank stocks is leading the overall market lower after BlackRock downgraded European stocks to underweight, with a negative view on the Eurozone banking sector due to fallout from Brexit. European stocks were also undercut after German May factory orders came in weaker than expected. On the positive side, mining stocks and gold producers are higher as the price of gold (GCQ16 +1.22%) rose to a 2-1/3 year high. GBP/USD is down -0.27% to a fresh 31-year low, while global government bond yields fell further into uncharted territory. The German 10-year bund yield slid to a record low of -0.205%, the UK 10-year gilt yield fell to a record low 0.729% and the U.S. 10-year T-note yield dropped to a record low 1.318%. Asian stocks settled mostly lower: Japan -1.85%, Hong Kong -1.23%, China +0.36%, Taiwan -1.61%, Australia -0.58%, South Korea -2.05%, Singapore and India closed for holiday. China’s Shanghai Composite rallied to a 2-1/2 month high on speculation the government will boost measures to spur economic growth in the wake of the fallout from Brexit. Japan’s Nikkei Stock Index fell to a 1-week low as exporter stocks declined after USD/JPY slid to a 1-week low, which reduces the earnings prospects of exporters.

BOE Governor Carney warned that the risks from Brexit have started to crystalize and “there is the prospect of a material slowing of the economy and that the number of vulnerable households could increase due to a tougher economic outlook.”

Netflix (NFLX +1.28%) fell over 2% in pre-market trading after it was downgraded to ‘Underperform’ from ‘Hold’ at Jeffries on subscriber growth concerns,

Dow Chemical (DOW -1.57%) was downgraded to ‘Underperform’ from ‘Outperform’ at CLSA.

Biogen (BIIB -1.24%) rose over 1% in after-hours trading on positive carryover from Tuesday’s decision by the European Commission to approve Biogen and Abbvie’s Zinbryta for treating relapsing forms of multiple sclerosis.

Ventas (VTR +0.83%) said it will acquire a group of medical and life-science properties from Blackstone Group LP for $ 1.5 billion.

Comcast (CMCSA -0.41%) dropped over 1% in after-hours trading on negative carryover from Tuesday’s session when the company said it will incorporate Netflix’s web-streaming services from Comcast cable boxes.

Tesla (TSLA -1.16%) slid over 1% in after-hours trading after the Detroit Free Press reported a Tesla Model X was in Autopilot mode when it crashed and rolled over on the Pennsylvania Turnpike on July 1.

Medivation (MDVN +2.73%) gained over 1% in after-hours trading after Reuters reported that it is in talks with Sanofi and other companies after it recently rejected a raised bid from Sanofi.