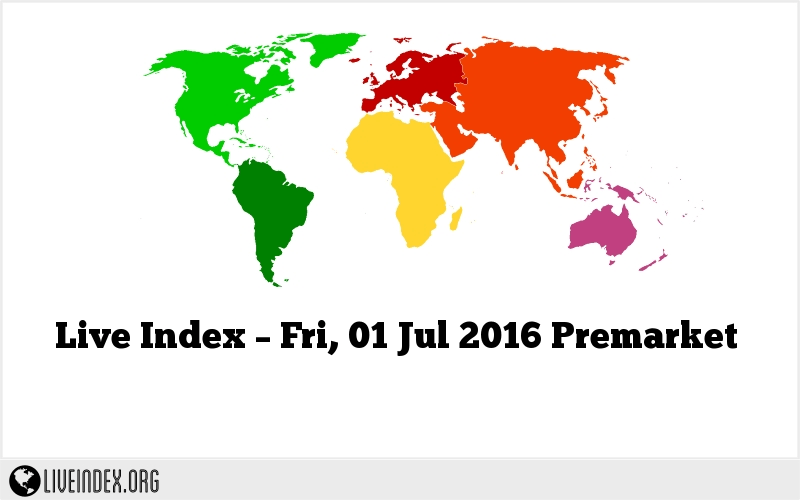 Sep E-mini S&Ps (ESU16 -0.10%) are down -0.12% and European stocks are down -0.03% as the market consolidates following the sharp rally over the past three days. Stocks were under pressure on Chinese growth concerns after a private gauge of Chinese manufacturing activity unexpectedly fell. Losses in European stocks were limited after manufacturing activity in the Eurozone last month was revised up to a 6-month high. Global government bond markets rallied on speculation that the world’s central banks will boost stimulus to contain the fallout from the Brexit vote after BOE Governor Carney signaled on Thursday the BOE could cut interest rates within months. The yield on the UK 10-year gilt fell to a record low of 0.776% and the 10-year yield on the Japanese 10-year bond fell further into negative territory as it slid to a record low -0.255%. Asian stocks settled higher: Japan +0.68%, Hong Kong closed for holiday, China +0.10%, Taiwan +0.83%, Australia +0.25%, Singapore +0.19%, South Korea +0.97%, India +0.54%.

The Eurozone Jun Markit manufacturing PMI was revised upward to a 6-month high of 52.8 from the originally reported 52.6.

The China Jun Caixin manufacturing PMI fell -0.6 to 48.6, weaker than expectations of unch at 49.2 and the steepest pace of contraction in 4 months.

The Japan Q2 Tankan large manufacturing business conditions was unchanged at 6, stronger than expectations of -2 to 4.

SolarCity (SCTY -1.48%) was downgraded to ‘Neutral’ from ‘Ourperform’ at Credit Suisse with a target price of $ 27.

Preferred Bank/Los Angeles (PFBC +0.49%) was rated a new ‘Outperform’ at FBR Capital Markets with a 12-month price target of $ 37.

Tesla (TSLA +0.99%) fell over 2% in after-hours trading after the U.S. National Highway Safety Administration (NHTSA) said it opened an investigation into a fatal crash involving a Tesla Model S sedan when the ‘Autopilot’ feature was engaged.

Mobileye (MBLY +9.96%) dropped over 4% in after-hours trading after the NHTSA said it opened a preliminary investigation into a fatal crash involving a Tesla car using Mobileye’s ‘Autopilot’ feature.

Franklin Covey (FC +5.87%) tumbled 12% in after-hours trading after it reported an unexpected -7 cent Q3 EPS loss, much weaker than consensus for a 7 cent gain.

Array BioPharma (ARRY +2.01%) climbed over 5% in after-hours trading after it submitted an application to the FDA for approval for its bibimetinib in patients with advanced NRAS-mutant melanoma.

September E-mini S&Ps (ESU16 -0.10%) this morning are down -2.50 points (-0.12%). Thursday’s closes: S&P 500 +1.36%, Dow Jones +1.33%, Nasdaq +1.21%. The S&P 500 on Thursday closed higher on signs that global central banks will take the necessary measures to address the Brexit crisis after BOE Governor Carney said the BOE may need to loosen monetary policy to contain the fallout from the UK’s Brexit vote. Stocks were also boosted by the +7.5 point increase in the Jun Chicago PMI to a 17-month high of 56.8, stronger than expectations of +1.7 to 51.0. Stocks were undercut by Dallas Fed President Kaplan’s comment that the likely effect of the Brexit vote will be to slow GDP growth.

Sep 10-year T-note prices (ZNU16 +0.39%) this morning are up +20 ticks. Thursday’s closes: TYU6 -2.50. FVU6 +2.50. Sep T-notes on Thursday closed lower on reduced safe-haven demand with the rally in stocks and on the larger-than-expected +7.5 point gain in the Jun Chicago PMI to a 17-month high. T-notes found support on the rally in UK gilt prices to a record high after BOE Governor Carney said the BOE may need to boost easing measures to contain the effects of the Brexit crisis.