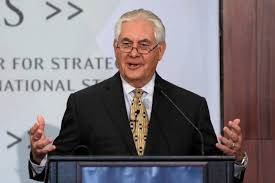 U.S. Secretary of State Rex Tillerson said before a visit to India next week that the Trump administration wanted to “dramatically deepen” cooperation with New Delhi, seeing it as a key partner in the face of negative Chinese influence in Asia.

Speaking on Wednesday, less than a month before President Donald Trump is due to make his first state visit to China, Tillerson said the United States had begun to discuss creating alternatives to Chinese infrastructure financing in Asia.

In another comment likely to upset Beijing, he said Washington saw room to invite others, including Australia, to join U.S.-India-Japan security cooperation, something Beijing has opposed as an attempt by democracies to gang up on it.

The remarks coincide with the start of a week-long Chinese Communist Party congress at which President Xi Jinping is seeking to further consolidate his power.

“The United States seeks constructive relations with China, but we will not shrink from China’s challenges to the rules-based order and where China subverts the sovereignty of neighboring countries and disadvantages the U.S. and our friends,” Tillerson told the Center for Strategic and International Studies think tank.

“India and the United States should be in the business of equipping other countries to defend their sovereignty, build greater connectivity, and have a louder voice in a regional architecture that promotes their interests and develops their economies,” Tillerson added.

The U.S. decision to expand relations with India almost certainly will upset India’s rival, Pakistan, where Tillerson also will stop next week, said a senior State Department official, speaking on condition of anonymity.

Pakistan was the main U.S. ally in South Asia for decades, but U.S. officials are frustrated with what they charge has been Pakistan’s failure to cut support for the Taliban insurgency in Afghanistan, where the administration wants India to play a bigger role in economic development.

As part of a South Asia strategy unveiled by Trump in August, Tillerson is expected to press Islamabad, which denies aiding the Taliban, to take stronger steps against extremists and allied groups and intensify efforts to pressure them to agree to peace talks with Kabul.

“We expect Pakistan to take decisive action against terrorist groups based there that threaten its own people and the broader region,” Tillerson said.

Trump has threatened further cuts in U.S. aid to Pakistan if it fails to cooperate.

A senior State Department official defended the timing of the speech, saying Tillerson also said he wanted a constructive relationship with China.

“For many decades the United States has supported China’s rise,” said the official. “We’ve also supported India’s rise. But those two countries have risen very differently.”

The Chinese Embassy in Washington said in a statement that Beijing “contributes to and defends the rules-based world order” and seeks to enhance international cooperation.

“We will never seek hegemony or engage in expansion, never pursue development at the expenses of others’ interests,” it said.

Tillerson did not say what he meant by creating an alternative to Chinese infrastructure financing, but said the Trump administration had begun a “quiet conversation” with some emerging East Asian democracies at a summit in August.

He said Chinese financing was saddling countries with “enormous” debts and failing to create jobs.

“We think it’s important that we begin to develop some means of countering that with alternative financing measures.”

“We will not be able to compete with the kind of terms that China offers, but countries have to decide what are they willing to pay to secure their sovereignty and their future control of their economies and we’ve had those discussions with them as well,” he said.