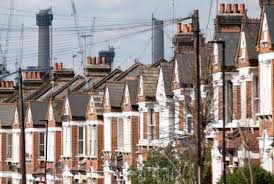 The chilling effect of Brexit on London’s real estate market is just getting worse.

House prices in the U.K. capital, traditionally one of the more crisis-proof assets in the investment universe, are now falling at their fastest rate since 2009, according to new data out at the weekend.

According to Acadata and LSL property services and reported by Bloomberg, the average price of a house in London was down 2.7% on the year in September, the decline accelerating from a rate of 0.7% in August.

Read: The U.S. Housing Market Is Getting Squeezed. See Where Prices Are Spiking the Highest

In recent months, many of the global banks have started to reveal details of their plans to relocate jobs away from London to other financial centers in Europe, afraid that the U.K. and EU won’t be able to agree terms of engagement for the post-Brexit period before the U.K. leaves the EU in March 2019. In a speech earlier this month, Prime Minister Theresa May had set out proposals for a two-year “implementation phase” that would essentially have let the City of London keep all its existing privileges for another two years. However, the EU refuses to start talks on future trading arrangements until it sees “sufficient progress” on the settling of the U.K.’s outstanding financial obligations to the EU. The EU’s chief negotiator Michel Barnier said last week that the talks were effectively ‘deadlocked’.

As bankers have traditionally set the tone for London’s housing market, the uncertainty over Brexit is hitting the top end of the market particularly hard. According to online realtors Rightmove, the worst hit areas were the affluent boroughs of Kensington & Chelsea, where prices were down 9.4%, and Hammersmith & Fulham, where they were down 6.1%. In Tower Hamlets, the borough where the financial center of Canary Wharf is situated, prices were down an average 8.1% on the year in October.

Another sign of the pressure is that bigger, swankier properties are being hit harder than smaller ones. Rightmove’s ‘top of the ladder’ segment was down 8.6% on the year to October, while properties for first-time buyers were down only 1.7%.

By contrast, much of the rest of the U.K. is showing a different picture, with prices rising more than 3% on average as compared to September last year. Despite falling prices in the capital, London remains the most expensive place to buy a home in the country.