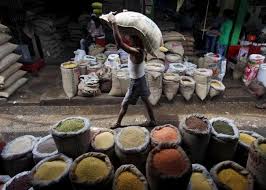 LATUR, India/NEW DELHI Millions of Indian farmers look set to switch from growing pulses and oilseeds after a government campaign to boost output became a victim of its own success by flooding markets with the crops, used in everything from fragrant curries to sticky desserts.

A shift to planting crops such as sugarcane and wheat could drag on global prices in those markets as supply swells, while raising the spectre of a swing to a shortage further down the line of the oilseeds and protein-rich pulses that are a staple of Indian cuisine.

“If farmers keep getting lower prices then they will shift to other crops and the entire cycle of shortages, price rises and higher imports will get repeated,” said Pravin Dongre, chairman of industry body the India Pulses and Grains Association.

Local prices for oilseeds have plunged around 40 percent in the last six months, while pulses have dropped by nearly a third.

That came after farmers lifted pulse production to what is expected to be a record of around 22 million tonnes in the 2016/17 crop year that ends in June, up 35 percent from a year earlier. Oilseed output is seen soaring 33 percent to nearly 34 million tonnes.

Farmers and industry officials said a government plan to buy 2 million tonnes of pulses at guaranteed prices was not enough to support the market, adding that the volume was too small and that oilseeds should be included as well.

The government declined to make official comment on the issue, although some staff told Reuters that New Delhi could not do more due to factors such as cost, limited warehousing and a lack of transportation. They asked not to be identified as they were not authorised to speak with media.

And the programme doesn’t appear to have helped Bapurao Suryawanshi, who owns 36 acres of land in Maharashtra.

“I was waiting in a queue outside a government procurement centre for six days to sell my pigeon peas,” said Suryawanshi, who stopped growing sugarcane to churn out the peas.

“As luck would have it, just before my turn came, they suspended the procurement operation citing the shortage of gunny bags.”

Jute packaging is compulsory for most commodities in India as the government looks to protect jobs in jute factories.

He has decided to switch back to growing sugarcane, a crop that environmentalists say stokes water shortages in Maharashtra.

SOWING THE SEEDS OF SHORTAGE?

Boosting local production of crops such as sugarcane and wheat will likely stifle demand for imports from one of the world’s top buyers of those commodities. It purchases most of its wheat from Australia, while also importing sugar from that country as well as from Thailand and Brazil.

And further down the road, the looming plunge to a shortage of pulses and oilseeds will likely deal a major blow to the government’s push to become self-sufficient in these crops by the end of the decade.

Future price rises of such popular foodstuffs in a nation of over 1.3 billion people would also like stoke inflation, that rose to around 2 percent last month.

The country in the 2015/16 fiscal year spent nearly $ 10 billion importing vegetable oils from places such as Malaysia, Indonesia, Brazil and Argentina and $ 2-$ 5 billion buying pulses from Austria, Canada and Myanmar.

But many farmers remain convinced they should switch to other crops.

“I have made a mistake by cultivating pulses and oilseeds,” said Satish Patil, a farmer who had produced pigeon peas on his 25 acres land.

“I am now going to rectify the mistake in the coming season by replacing the area with sugarcane.”