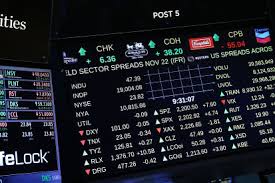 Coming into trading Friday, the Dow Jones industrial average had closed at a record high 10 days in a row. The remarkable run is the longest such streak since 1987, and pushed the index well past the 20,000 mark that Wall Street had been eyeing for months. Since the beginning of the year, the Dow has gained 5.3% through the close Thursday.

But there are signs the daily winning streak may come to an end. Investors started the day skittish. In premarket trading, only one of the 30 Dow stocks traded higher than its closing price Thursday, perhaps a reaction to the losses shown by many European and Asian markets across the world earlier today. Dow futures were down 0.2% in midday trading, roughly in line with the 0.3% loss the Dow was experiencing itself.

The Dow has been surging since President Trump’s election, mostly on the back of investor excitement about his business-friendly economic agenda. The last time the Dow had a down day was February 8, the day before Trump pledged to unveil what is expected to be a very favorable tax plan for corporations.

But there is some apprehension starting to swirl about taxes that Trump may seek to impose on companies that import goods rather than manufacture them in the U.S. Trump brought the issue up Thursday afternoon and investors took notice, selling off shares of several retailers.

Softening commodities prices may also be contributing to the swoon today. The price of oil is down today, as is natural gas, which is bad sign for Dow stocks Exxon Mobil and Chevron. Agricultural commodities are also taking a beating, with coffee and sugar down roughly 2% each.

Adding to the mix is some negative corporate earnings results. Struggling retailer J.C. Penney missed analyst expectations for its quarterly earnings filing this morning and announced it would shutter between 130 and 140 stores in the coming months. U.S. Cellular also reported results that fell short of expectations. HP Inc. disappointed in its earnings report, which was released after the bell Thursday.

As good as the Dow’s performance has been so far this year, it has actually lagged behind the S&P 500 and Nasdaq composite, both of which have not made any gains in the past two days. That appears to be as good an indication as any that the Dow is a bit overdue to take a loss. Hopefully it won’t be the kind of loss it took in 1987, when record highs were followed by a sharp bear market.