With stocks, bonds, and gold all moving in the exact same direction across the globe, the potential for a massive collapse continues to grow, say many analysts.

The correlation across asset-classes over the past few months – as global central banks ramp up QE to $200bn per month – is near record highs.

Massive central bank stimulus with below zero rates and quantitative easing has led to increasingly dysfunctional markets, with even the negative correlation between stocks and bonds breaking down. As we have noted previously, they are now largely moving in the same direction as markets have become more driven by central banks, leaving investors with no place to hide. 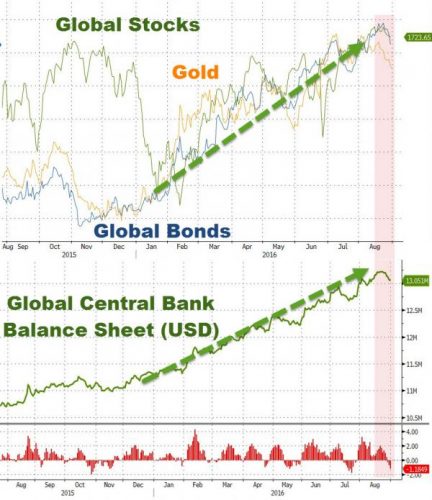 Raising notable concerns over a risk-parity fund blow up. As BofA warns: “Latent risk remains worth monitoring, as (i) leverage is still near max levels across a variety of risk parity  parametrizations, (ii) bond allocations are historically elevated, and (iii) markets continue to be sceptical of a 2016 Fed hike.”

If BofA is correct, it would mean that a day which sees a -4% SPX drop and +1% bond rally (good diversification) would generate no selling pressure, “underscoring the critical role played by bond-equity correlation in governing the severity of risk parity unwinds.” However, a troubling scenario is one where even a relatively benign 2% selloff of the S&P coupled with just a 1% selloff of the 10Y could result in up to 50% deleveraging, which in turn would accelerate further liquidations by other comparable funds, and lead to a self-fulfilling crash across asset classes.

Which incidentally sounds like precisely the scenario that could happen when the Fed tries to raise rates, and is also why asset classes continue to move without fear of any rate hike, as they now realize – very well – just how trapped the Fed truly is. That said, in short order, we will see if the Fed, for once, has the intestinal fortitude to actually raise rates in the face of the extreme volatility awaiting equities in the event they do… we doubt it.

A generation of traders have grown up with the idea that stock prices and bond yields tend to rise and fall together, as what is good for stocks is bad for bonds (pushing the price down and yield up), and vice versa. However, as The Wall Street Journal reports, this summer,the relationship seems to have broken down in the U.S. Share prices and bond yields moved in the same direction in just 11 of the past 30 trading days, close to the lowest since the start of 2007.

This is far from unprecedented. But since Lehman Brothers failed in 2008, such a swing in the relationship has been unusual and suggests prices are being driven by something other than the balance of hope and fear about the economy. It has tended to coincide with times of deep discontent in markets, notably the 2013 “taper tantrum,” when bond yields briefly surged after Federal Reserve officials signaled they would soon end stimulus, and last year’s brief bubble in German bunds. 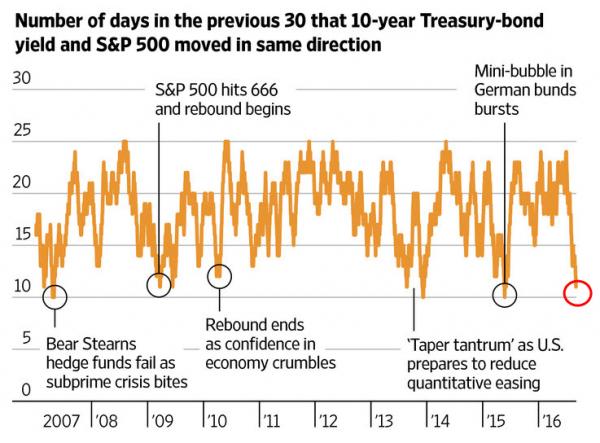 The simplest explanation is that expectations of interest rates being lower for longer—some central bankers have suggested lower forever—pushes the price of everything up, and yields down. When the focus is on the discount rate used to value all assets, bond and stock prices rise and fall together, creating the inverse relationship between bond yields and shares.

Such a focus on monetary policy isn’t healthy. It leaves markets more exposed to sudden shocks, both from changes in policy and from an economy to which less attention is being paid.

“It’s a somewhat mercurial thing, but there are big shifts [in correlations], and being on the right side of those big shifts is important,” said Philip Saunders, co-head of the multiasset team at Investec Asset Management. “You do see some brutal price action at these correlation inflection points.”

Much depends on what is behind a selloff. For stocks and bonds to fall together needs rising interest rates combined with weak growth. Stagflation as in the 1970s could be one cause; a central-bank mistake could be another.

Or, as Alasdair Macdonald, head of U.K. advisory portfolio management at Willis Towers Watson says, such a breakdown could be caused by a loss of faith in central banks. “Investors might realize that the central banks have run out of ammunition, and they can’t keep pushing up asset prices further,” he said.

What kind of ‘event’ could occur this time?
As we noted previously, it appears the bigger concerns are on the stock side of the imbalance… 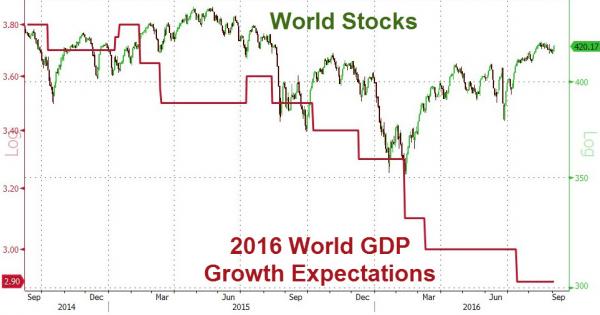 And don’t forget, everyone is on the same side of the boat again… As stocks go higher and vol goes lower, leverage speculative positioning is just chasing that trend adding to already record extreme positioning… 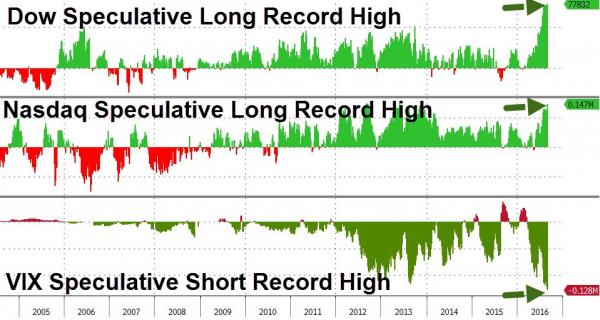 And S&P Large Speculators just hit its highest since 2013… 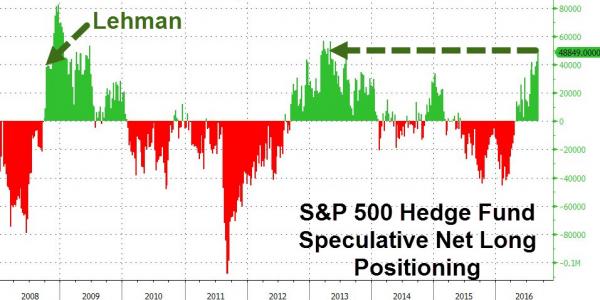 In early trading this morning, investors are simply standing pat. The SPDR Dow Jones Industrial Average ETF  was unchanged at $185.32 per share in premarket trading Thursday. The DIA, which is the largest ETF that tracks the DJIA, has gained 6.51% year-to-date.

Article is brought courtesy of ZeroHedge.