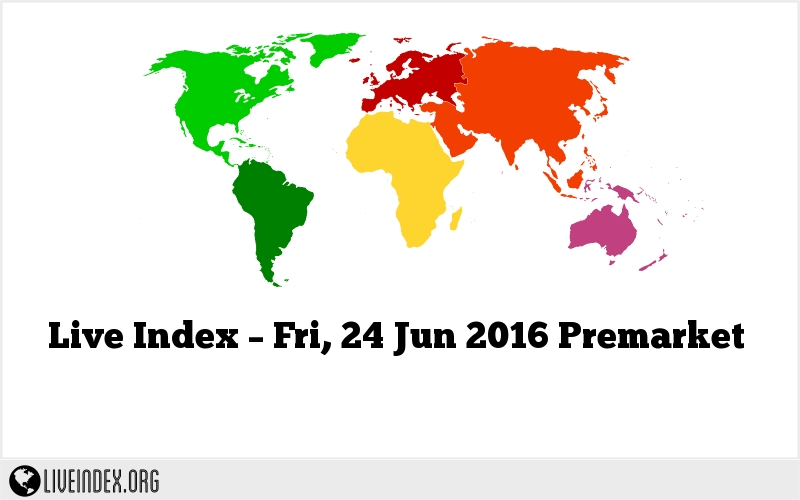 Sep E-mini S&Ps (ESU16 -3.88%) are down sharply by -4.04% to a 3-1/4 month low and European stocks plunged -9.12% to a 4-1/2 month low after voters in the UK voted to leave the European Union. The Brexit vote to “Leave” the EU shows 52% in favor versus 48% for “Remain.” The British Pound sank to a 30-3/4 year low and UK Prime Minister Cameron, a staunch supporter of the UK remaining in the EU, resigned after the vote to leave the EU. The Sep mini S&P sank as much as -5.1% in overnight trade which triggered a trading curb that means the contract cannot move below that level until the opening of regular trading. Stocks plunged around the world and government bond markets soared on concern that the UK may fall into recession if it leaves the EU, which in turn will cause a European and global recession. Gold prices (GCQ16 +4.60%) surged +4.93% to a 2-1/4 year high on increased safe-haven demand and the 10-year German bund yield plummeted to a record low of -0.17%. Asian stocks settled sharply lower: Japan -7.92%, Hong Kong -2.92%, China -1.30%, Taiwan -2.30%, Australia -2.17%, Singapore -2.09%, South Korea -2.88%, India -2.24%. The plunge in global bourses fueled a rally in the yen on safe-haven demand as USD/JPY sank to a 2-1/2 year low, which sent Japanese exporter stocks into a tailspin and the Nikkei Stock Index fell to a 1-1/2 year low.

Dallas Fed President Kaplan (non-voter) said that accommodation should only be removed “based on realistic assessment of economic conditions.” He added that he has been “strongly persuaded by arguments that aging demographics in advanced economies, a decline in productivity growth, and the continued emergence of the U.S. as a source of safe assets have all contributed to the decline in the neutral level of interest rates.”

Danaher (DHR +1.41%) was upgraded to ‘Outperform’ from ‘Market Perform’ at Bernstein.

Albemarle (ALB +1.30%) climbed 1% in after-hours trading after it was announced that it will replace TECO Energy in the S&P 500 after the close of trading on Thursday, June 30.

Fortive Corp. ({=FTV-W=}) will replace Columbia Pipeline Group CPGX in the S&P 500 after the close of trading on Friday, July 1.

Inteliquent (IQNT +3.90%) rose nearly 4% in after-hours trading after it was announced that it will replace Emcor in the S&P Smallcap 600.

U.S. bank stocks may be active today after the Fed Stress tests, released after markets closed Thursday, showed that all 33 banks exceed the minimum capital ratios.

Arista Networks (ANET +3.45%) dropped 4% in after-hours trading on concern its products could be banned from the U.S. because they infringe on patents owned by Cisco, according to a statement on the website of the U.S. International Trade Commission (ITC).

Sep 10-year T-note prices (ZNU16 +1.70%) this morning are up sharply by +2-18.5/32 points at a contract high. Thursday’s closes: TYU6 -17.00, FVU6 -9.25. Sep T-notes on Thursday dropped to a 2-week low and closed lower on reduced safe-haven demand as global stocks rallied sharply on optimism that the UK would vote to remain in the EU. T-notes were also undercut by the bigger-than-expected decline in U.S. weekly jobless claims and by increased inflation expectations after the 10-year T-note breakeven inflation rate rose to a 1-week high.