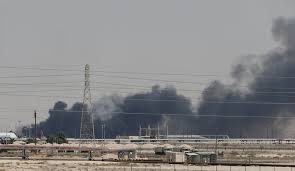 Asian refiners and traders said they are expecting Saudi Arabia to import large volumes of refined oil products and curb exports of light crude oil after attacks on Saturday that forced it to shut down more than half of its oil output.

Top oil-consuming region Asia, though, can tap strategic oil reserves if necessary to cover 30 to 220 days of oil imports depending on the country, while oil product supplies are adequate for now as new refining capacity has been added this year, they said.

Oil prices surged nearly 20 percent during early Asian trading hours on news that Saudi Arabia, the world’s largest oil exporter, cut output at its processing facilities at Abqaiq and Khurais by a total 5.7 million barrels per day (bpd), with no indication on when output will be resumed.

“While it is still too early to know the extent of the damage done to the production infrastructure, Abqaiq is easily the world’s single most important oil production and processing infrastructure site, with the super giant Ghawar oil field adjacent to it,” said Tilak Doshi, an oil consultant with Muse, Stancil & Co.

China currently has about 325 million barrels of oil in its strategic petroleum reserves, enough for about 33 days of imports, according to industry estimates.

Still, refiners in China do not seem worried about security of oil supply.

A company executive from Zhejiang Petrochemical, one of China’s two new mega integrated refineries, said inventories of crude oil were “comfortable” as it gears up for full production at its new 400,000-bpd plant in east China later this year.

“Our stocks can easily last till the end of the year due to our earlier purchases. Even with supply cuts by a few cargoes, we will be fine,” the executive said.

South Korea said on Monday it would consider releasing oil from its strategic reserves if the situation on crude oil imports worsens, although the country’s energy ministry did not anticipate any short-term impact on securing supplies.

India’s oil ministry said on Monday it was closely watching the situation and was in talks with Indian refiners and Saudi Aramco. The latter has indicated there will be no shortage in supplies, the ministry said.

While newer refineries in Asia are able to process heavier crude grades should Saudi Arabia cut exports of its lighter crudes, it may not be quick or cheap.

“Typical buyers of Arab Light are Japan, South Korea, India and China. It won’t be easy, cheap or quick to switch to heavier grades of oil if refineries are configured for lighter grades,” noted Abhishek Kumar, head of analytics at Interfax Energy in London.

“Key buyers will try to purchase light crude grades from countries such as the U.S., and use their (own country’s) strategic reserves,” he said.

“They are looking (for oil products) since they are trimming run rates at some of the refineries,” a Singapore-based trader said.