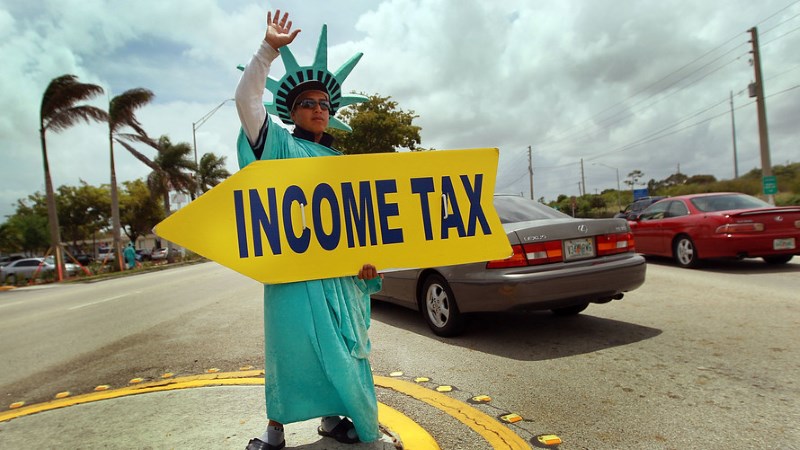 How These Fortune 500 Companies Paid $0 In Taxes Last Year

When it comes to tax day, many big American corporations have a powerful message: We’ll pass.

Of the Fortune 500 companies that have already filed their 2018 taxes, 60 were profitable and yet avoided all federal income tax, according to an ITEP analysis released on Thursday. The total U.S. income of the 60—which ITEP reports included such names as Amazon, Chevron, General Motors, Delta, Halliburton, and IBM—was more than $ 79 billion and the effective tax rate was -5%. On the average, they got tax refunds.

In a previous ITEF study of 258 Fortune 500 companies that were profitable in every year from 2008 to 2015, 18 of them paid no federal income in any of those years. According to ITEP, 2018 saw the second-largest corporate income tax reduction, with only 2009 showing a bigger fall.

The current public face of this issue has been Amazon, which has taken heat of late for not paying Federal income tax in 2017 or 2018. That’s despite an analysis of public financial data by Fortune which showed that since going public, the company has amassed a total net income over 22 years of $ 57.8 billion. A company statement sent to Fortune said in part, “Amazon pays all the taxes we are required to pay in the U.S. and every country where we operate.”

But Amazon and the other 59 on the no-taxes list are certainly not alone. Even with top corporate rate down from 35% to 21%, companies are still throwing massive sums at tax experts who help them find ways—often creative and convoluted—to pay as little as possible. That has meant a dramatically widening gap between what corporations pay and what individuals pay. Below, we looked at the three main ways corporations are skirting Uncle Sam.

“The primary area is really the US multinational companies who avoid or minimize their US tax by moving their profits around the world,” Jeffrey Gottlieb, an accounting and finance instructor at the University of North Florida and 35-year veteran of industrial tax strategies, told Fortune. By shifting income geographically and choosing to house it in low-tax areas, a multinational can minimize the U.S. taxes it pays.

New taxes that came into effect in 2018 were supposed to stop the juggling, but at most it only made a dent. “The game is still being played in a big way,” Gottlieb said. “Maybe slightly less than before, but there’s still a lot of income shifting going on.”

“Say a U.S. multinational decides to buy a supermarket chain in the U.K. for $ 1 billion,” said Shawn Carson, a director in the international tax services group of accounting, audit, and tax consulting firm EisnerAmper. The parent corporation creates a U.K. division but tells the IRS that the new entity is really part of the domestic company. But the U.K. will treat it as a separate company. The parent lends the new division $ 1 billion to buy the chain. The division does so, runs the business, and pays back the $ 1 billion, with interest, to the parent. Because of the so-called check-the-box choice, to the U.S. it’s all an American company and so the loan payments aren’t income. But the division gets to deduct the interest part from U.K. taxes and the profits are kept overseas.

Another mechanism has been to shift intellectual property—a broad category that includes patents, copyrights, trademarks, business processes, and trade secrets—to foreign subsidiaries in low-tax countries. The parent pays royalties to use these foundational aspects of how they do business to the subsidiaries, even though the parent did most or all of the development. The 2017 tax laws were supposed to discourage the practice, but law firm Fenwick and West has noted that bringing such IP back home won’t make sense for many companies because the U.S. tax rate on IP kept overseas will be about 10.5%, while IP owned in the U.S. is taxed at a higher rate.

A classic example of IP shifting was Starbucks in 2015. The European Commission came down hard on the company. “Starbucks used to buy their coffee beans from that well-known coffee producer, Switzerland,” says Alexon Bell, head of anti-money laundering at analytics startup Quantexa. Technically, according to the European Commission, the company’s major European division was paying “an inflated price for green coffee beans to Switzerland-based Starbucks Coffee Trading SARL.” It also paid a royalty to Alki, a Starbucks-owned U.K.-based company, “for coffee-roasting know-how.” At the time—Oct. 2015—Starbucks issued a statement that it complied with relevant tax rules, laws, and guidelines and had paid $ 3 billion in global taxes from 2008 to 2014, as the New York Times reported then.

In addition to shifting profits, corporations are also always on the hunt for ways to increase paper expenses and even losses. “Some of the ways that corporations pay very little to no tax in the United States is by using operating losses that they generated from prior years,” said Jennifer Correa Riera, a tax attorney and partner in the firm Fuerst Ittleman David & Joseph.

Opting for various tax credits is a popular strategy and one made possible by Congress. An example is a popular credit for research and development, or R&D. Companies normally deduct R&D costs as expenses, which means they reduce taxable income. Effectively, the tax savings is 21%—the new U.S. corporate tax rate—of the expenses.

Under the R&D credit, these expenses aren’t deducted from corporate revenue before calculating tax. Instead, all qualified research and development spending—which can mean working on new products, technologies, software processes, or techniques—is subtracted directly from the total calculated tax. Instead of reducing the total tax by 21% of the R&D expenses, the company gets to reduce taxes by 100% of the expenses.

It’s a bonus that can save a lot. The irony is that modern companies that wish to be competitive must innovate and improve anyway. With the credit, a company further lowers its their taxes by doing something it might have done anyway. Tax observers also point to credits some companies get for putting up new buildings as an example of rewarding a behavior that is a fundamental cost of doing business.