About Nasdaq – US
Q >> What is Nasdaq Composite Index?

A >> The NASDAQ composite is an index composed of over 2,500 securities listed in the NASDAQ exchange.
NASDAQ composite index includes all listed stocks, limited partnerships, real estate investment trusts and American Depository Receipts.
However not included are any closed-end funds, exchange-traded funds, convertible securities, preferred shares or derivative securities listed on the exchange.
The NASDAQ Composite is classified as a broad-based stock market index and is sometimes called the NASDAQ average.

Q >> What is the difference between Nasdaq Composite & Nasdaq 100 Index

A >> Sometimes people confuse them with each other. There are two NASDAQ stock indexes – the NASDAQ Composite and the NASDAQ 100.
The NASDAQ composite is an index composed of over 3,000 securities listed in the NASDAQ exchange. It includes all listed stocks, limited partnerships, real estate investment trusts and American Depository Receipts.
Where as NASDAQ 100 index is an index, which is composed of 100 or 107 largely traded United States companies. These companies are non-financial companies and are listed on the NASDAQ.

Q >> What is the History of NASDAQ Composite?

A >> NASDAQ Composite came into being on 31 January 1985.
This index is owned by “NASDAQ” which created two different indices, NASDAQ Composite index and NASDAQ Financial 100.
At the beginning of Nasdaq Composite index, the base price for the index was set as 250, but at the end of first year i.e. Dec 31, 1993 the base price was reset at 125.
Foreign companies were first time admitted to this index in January 1998.

The decline from this peak of above 5000 signaled the beginning of the dot-com bubble burst.
The Nasdaq Composite declined to half its value within a year. Thereafter it hit the bottom of the bear market with an intra-day low of 1,108.49 on October 10, 2002.
While the index gradually recovered since then, it did not trade for more than half of its peak value until May 2007.

Thereafter Nasdaq Composite reached an intra-day level of 2,861.51 on October 31, 2007, the highest point reached on the index since 2001.
Again, high energy prices, the failure of Lehman Brothers and the possibility of recession dropped the NASDAQ Composite into a bear market in 2008.
On September 29, 2008, the NASDAQ dropped nearly 200 points, losing 9.14% (third largest in history) to fall beneath the 2,000 level.

Q >> How is NASDAQ Composite different from other indices?

A >> The most important different between Nasdaq Composite & DJIA or S&P500 is that NASDAQ Composite is primarily focused on technology-based corporations such as Apple, Amazon, Google, Microsoft, Netflix and several other tech companies.
Whereas all other major indices are diversified and more inclined towards industrials / financials.

Q >> What are other names used for NASDAQ Composite? 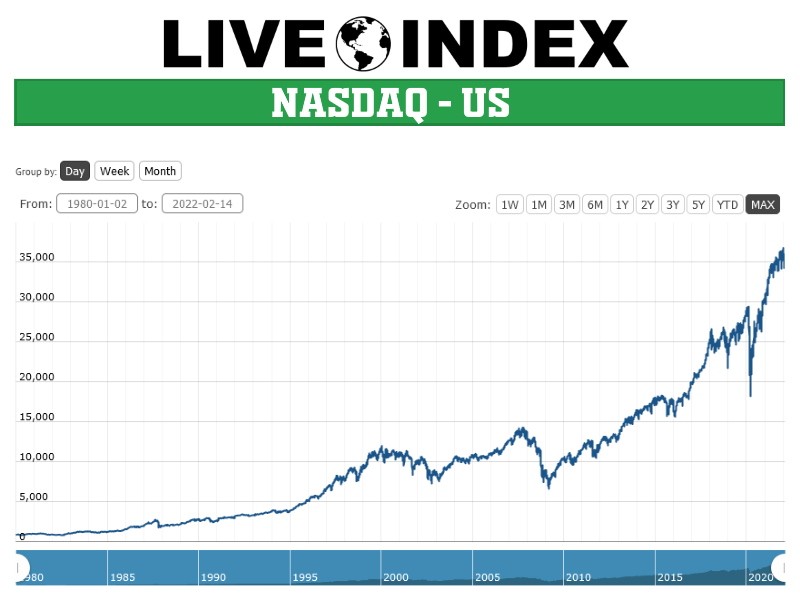