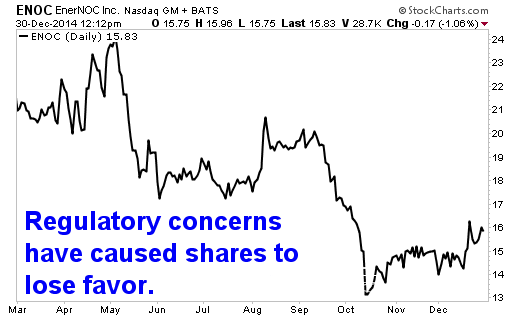 Obama Administration Could Propel This Small Cap 55% in 2015

The phrase “cost avoidance” doesn’t have the same cachet as “revenue growth.” Still, they have the same beneficial impact on the bottom line. In fact, in the electrical industry, cost avoidance is emerging as the dominant goal. And one small company is helping utilities achieve it.

Little-known EnerNOC (NASDAQ: ENOC) was founded just over a decade ago, but it recently hit a key milestone: According to the company, its customers have now saved more than $ 1 billion by using its software and services. And EnerNOC has barely scratched its total addressable market.

Every year, the nation’s electrical grid is pushed to capacity during heatwaves. When that happens, the local, regulated power companies must obtain power on the open market from wholesale power providers, often at exorbitant prices.

The regulated power companies hate it and so do consumers when they see their monthly bills spike. The power companies could build more power plants, but that’s an expensive option, especially when they will only be needed as backup when the grid is strained.

When a particular utility identifies an imminent blackout or an imminent need to buy expensive spot market power, it can help decrease demand by asking key customers to reduce their demand. If the system is still too taxed, EnerNOC’s software helps locate the least costly available power that can be sent from neighboring grid operators.

The company also counts the power consumers themselves as customers. Companies such as General Electric (NYSE: GE) and AT&T (NYSE: T) enter into long-term contracts with EnerNOC that promise savings in exchange for reduced power consumption at specific times in a program known as “demand response.”

By the company’s internal estimates, EnerNOC has already invested roughly $ 200 million in its network, and in recent months, it has been spending even more to cement its role as the leading demand response vendor. For example, early in 2014, it acquired German firm Entelios and Irish firm Activation Energy to expand its regional customer base and skill set.

And at the beginning of December, the company acquired Canada-based Pulse Energy. This deal will enable EnerNOC to tap the small-to-medium-sized business market, which has been largely ignored by the demand response industry thus far.

Meanwhile, a 35% pullback from its 52-week high has dropped EnerNOC’s market value to around $ 420 million. In effect, the company is not valued much higher than its invested capital in building out the platform.

The key reason why shares have pulled back is related to a regulatory issue regarding the wholesale energy market that is weighing too heavily on the stock, despite the fact that the rest of the business is growing nicely.

And this is where the Federal Energy Regulatory Commission (FERC) and FERC Order 745 come in. Issued in 2011, it enabled demand response systems to be used on a widespread basis, even across wholesale power provider networks.

Companies such as FirstEnergy (NYSE: FE), which provide excess power at peak demand times, have been fighting the legislation. In recent months, Congress has sought to make sure Order 745 remains in place, in support of companies like EnerNOC. The Obama administration, though generally supportive of Order 745, has sought to let the courts — rather than legislators — decide its fate. The U.S. Court of Appeals recently honored FERC’s request to keep the order in place while the issue gets sorted out.

That appears to suit EnerNOC’s Healy just fine. “We plan to seek the Supreme Court’s consideration of the D.C. Circuit Court’s decision, which set all of these events in motion. And we have a compelling legal argument as to why capacity markets are very different from economic demand response in terms of FERC oversight,” he said in a call with investors.

Here’s what you need to know about this convoluted legal morass. If the courts decide to vacate Order 745, closing the door on demand response in wholesale energy markets, then Congress and the executive branch appear inclined to implement it through legislation.

“If we can’t prevail in the court system and this decision continues to stand I think we’ll have to go back and look at an appropriate legislative fix,” said John Podesta, an advisor to President Obama, in an interview with Utility Dive.

So the real risk here is that the issue remains in place for several more quarters. Any resolution to the matter would likely kick off a relief rally in shares of ENOC, as investors again focus on what is shaping up to be a fast-growing business model.

Analysts expect EnerNOC to boost sales nearly 22% in 2014 to $ 466.8 million, and they anticipate 11.6% revenue growth in 2015 to $ 520.7 million. The acquisitions noted earlier set the stage for an expansion into international and small-to-mid-sized business markets, which should help the top line grow at a double-digit pace in subsequent years. EnerNOC is also making solid inroads in Japan and Australia, and it is just getting going in Europe.

A positive resolution to the FERC issues could lead to a quick 50%-plus upside move for shares to around $ 24, which is where they traded this spring before concerns arose. Even in the absence of a positive resolution, ENOC still likely has 25% to 30% upside, though perhaps over the course of the next 12 months, as investors will need time to understand that this business still has many growth drivers in place beyond the wholesale power production market.

Note: We just finished a brand-new report on the top 10 stocks for 2015. Last year, our picks blew away even our expectations. They returned 20% in two weeks… 118% in three months… 266% in 12 months… Now, our latest picks are flashing the same kinds of “buy” signal as last year’s picks. You can access the report here free of charge.