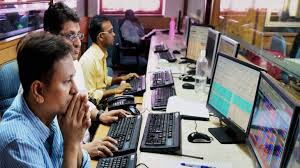 The market failed to hold on to gains on Thursday as benchmark indices saw selling pressure in late trade and Nifty, Sensex fell half a percent each despite recovery in Asian peers and positive trade in Europe.

All Nifty sectoral indices closed in the red. Banking & financials (except HDFC Bank), oil & gas and FMCG stocks pulled the Nifty below 10,400 levels.

“The Nifty traded in a narrow range today & ultimately formed a bearish Inside bar for the day. It continued to face selling pressure near 10,400-10,500 zone. Multiple Technical parameters are placed in the range, which are restricting the upside,” Gaurav Ratnaparkhi, Senior Technical Analyst, Sharekhan said.

According to him, overall wave structure shows that the distribution phase can continue for few more sessions before the next leg down kicks in.

However if bears manage to break the swing low of 10,336 on closing basis, which means the Inside bar breaks out on the downside, then the index can resume the larger downtrend without further distribution, he said, adding from short term perspective, 10,141 & 10,000 will be the targets on the downside.

The market breadth was largely in favour of advances with advance-decline ratio of 3:2.

IOC was the biggest loser among Nifty50 stocks, falling 2.8 percent after the stock adjusted for bonus share issue.

The PSU Bank was biggest loser among sectoral indices, falling 0.7 percent amid banking fraud case. Punjab National Bank, the second largest public sector lender, detected another case of Letter of Undertakings (LoU) fraud worth Rs 9 crore in its Brady House branch in Mumbai, according to CNBC-TV18 quoting sources. The state-owned bank has field complaint with Central Bureau of Investigation against Chandri Papers and Allied Products.

Jaiprakash Associates rallied 17 percent as investors cheered the developments around the bid for Jaypee Infratech. Details emerging from Wednesday’s meeting of committee of creditors seem to indicate that Adani Group could be entrusted with the task of completing the unfinished flats of Jaypee Infratech besides ensuring that lenders face minimum haircut. Adani Enterprises and Jaypee Infratech gained nearly 2 percent each.

Global markets were higher in trade amid concerns over heightened global trade tensions. In Asia, the Nikkei 225 edged up by 0.12 percent and Kospi was up 0.25 percent. Hang Seng gained 0.34 percent.

European markets – France CAC, Germany DAX and Britain FTSE were up 0.3-0.6 percent at the time writing this article.