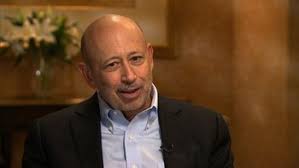 Lloyd Blankfein: Economy is ‘higher’ under Trump than if Clinton won

“If the president didn’t win, and Hillary Clinton won … I bet you the economy is higher today than it otherwise would be,” Blankfein told CNN’s Christine Romans in an interview that aired on Wednesday.

Blankfein was responding to a question about how much credit Trump should get for the stock market surge and stronger economic growth.

“At the time I supported Hillary Clinton. We’re not talking about all things. We’re talking just about the economy,” Blankfein said on the sidelines of the Goldman Sachs (GS) 10,000 Small Businesses Summit.

The U.S. economy is indeed strong. Unemployment has dropped to a 17-year low, small business optimism is roaring, and economic growth has picked up.

If anything, Blankfein is worried that the Trump administration could be overheating the economy, raising the risk of inflation. He mentioned the federal deficit, which will balloon because of $ 1.5 trillion in tax cuts and $ 300 billion in additional spending.

“The odds of a bad outcome have gone up,” Blankfein said.

Related: Blankfein: Odds of a ‘bad outcome’ for economy have gone up

Inflation numbers released on Wednesday renewed Wall Street’s concerns that the Federal Reserve will need to cool off an overheating economy.

Even though Trump portrayed Blankfein and Goldman Sachs as part of the problem during the campaign, he filled his administration with veterans of the influential bank. Treasury Secretary Steven Mnuchin and chief economic adviser Gary Cohn are Goldman alums.

To support its economic track record, the White House promotes the $ 1,000 tax cut bonuses that have been handed out by major companies like Walmart (WMT), Bank of America (BAC) and JetBlue (JBLU).

But Blankfein said they won’t make a lasting difference for workers.

“I think a lot of it is symbolic and making a statement,” he said. “We’re dealing in a world of sentiment. Symbolism matters.”

The one-time bonuses also won’t solve income inequality, which Blankfein said has “created political instability” and is being “compounded” by the rise of technology.

He gave the example of a hypothetical ride-sharing company that garners a $ 50 billion market value, but displaces 30,000 taxi drivers along the way.

“It’s kind of a wealth transfer in the short term, from labor to capital,” Blankfein said. “Over time, people find other jobs to do, other things to do, but that’s over time. And by the way, it may not be the same people.”

Like other CEOs, the Goldman Sachs boss lamented the “poison politics” of today, in which “extremes of both parties” are being elected by promising not to compromise.

“So everyone goes to Congress and gets nothing done,” Blankfein said. “Would we have a country if people went to Philadelphia [to form the Continental Congress] that way? Of course not. It’s crazy.”

Business leaders like Blankfein have criticized Washington’s unsteady handling of the Deferred Action for Childhood Arrivals program, an Obama-era initiative known as DACA that protects immigrants brought to the United States as young children.

The status of these immigrants known as Dreamers has been in limbo as Congress debates what to do with DACA.

“I couldn’t bear the idea of sending outside the country someone who grew up here his or her entire life,” Blankfein said.

Blankfein said he understands that some Americans struggling with unemployment “view immigrants as a threat.” However, he noted that “over time immigrants add to the economy because they bring in skills.”

He expects DACA to be resolved through a compromise — eventually.

“This is a political event, it involves sentiment, but it isn’t necessarily ruled by reason,” Blankfein said.