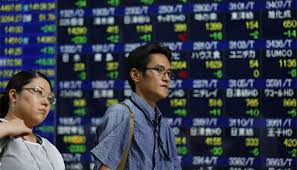 Asian stocks fell on Friday, with Chinese shares slipping to multi-month lows after Wall Street shares dropped again in the face of rapidly-rising bond yields, while perceived havens such as the yen and Swiss franc were in demand.

In addition to pressure from the drop in global shares, Chinese equities were weighed by factors such as investors attempting to stay liquid ahead of the Lunar New Year holidays and pressure to meet rising margin calls.

The Shanghai Composite Index retreated 4.1 percent after slipping to its lowest since May 2017 and the blue chip CSI300 index was down 4.6 percent, after plumbing a six month low.The slide resulted in Chinese stocks following their U.S. counterparts into correction territory – a fall of 10 percent or more.

The index, which hit a record high on Jan. 29, was on track for its sixth straight day of losses and stood to lose about 7.7 percent on the week.

“The correction phase in equities could last through February and possibly into March,” said Masahiro Ichikawa, senior strategist at Sumitomo Mitsui Asset Management in Tokyo.

“The rise in long-term U.S. yields will have to settle for the correction phase to end. The surge in volatility has also prompted investors to sell risk assets, in turn feeding volatility.”

U.S. markets remained the epicenter of the global sell-off, with the Dow plunging 4.1 percent and the S&P 500 sinking 3.7 percent overnight.

With Thursday’s losses, both the S&P 500 and the Dow slid into correction territory, falling more than 10 percent from record highs of Jan. 26 and showing the dust was yet to settle from the slide that began a week ago. [.N]

Higher yields are seen hurting equities as they increase borrowing costs for companies and reduce their risk appetite. They also present a fresh alternative to investors who may reallocate some funds to bonds from equities.

The yield on the benchmark 10-year Treasury note rose as high as 2.884 percent on Thursday, just below Monday’s four-year high of 2.885 percent. It last stood at 2.8330 percent.

Treasury yields have been pushed up by the prospect of increased debt issuance to fund fiscal spending under U.S. President Donald Trump, inflation worries, and expectations of the Federal Reserve raising rates sooner and more frequently than was expected.

“An increase in fiscal spending ahead of the U.S. midterm elections has caused the Fed to brace for inflation accelerating and the economy overheating. This led yields higher, ultimately triggering the fall in equities,” said Yoshimasa Maruyama, chief market economist at SMBC Nikko Securities in Tokyo.

It could be up to new Fed Chair Jerome Powell to restore calm in the financial markets, he said.

In currencies, the dollar was little changed at 108.880 yen , having lost 0.5 percent overnight. It was on track to lose 1.5 percent against its Japanese peer on the week.

The Swiss franc was also mostly unchanged at 0.9373 franc per dollar after advancing about 0.7 percent the previous day.

The dollar index against a basket of six major currencies was flat at 90.241 after touching a two-week high of 90.567 overnight.

U.S. crude futures were down 1 percent at $ 60.53 per barrel after hitting a seven-week trough of $ 60.27 on Thursday amid fears of rising global supplies after Iran announced plans to increase production and U.S. crude output hit record highs. [O/R]