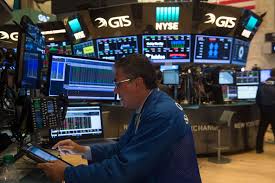 No, The Stock Market Isn’t Crashing. But The Dow Is in Correction Territory

Amid continued volatility and worries about rising interest rates, the S&P 500 and Dow Jones Industrial Average both entered correction territory on Thursday—closing down 10% from the all-time highs that each hit roughly two weeks earlier.

The selloff comes as investors grow worried that the stock market may have run up too much too fast in anticipation of the impact of President Trump’s tax reforms. One of the most likely triggers of their concerns: Bureau of Labor Statistics data from Friday, pointing to higher-than-expected wage growth in December. The information fanned fears that inflation would soon tick upward, leading regulators to raise interest rates. Since Friday, markets have been choppy. The VIX, an index that measures traders’ expectations of market volatility, was coming back with a vengeance. After falling as low as 9 in 2017, it rose as high as 36 on Thursday.

The Bank of England likely also fueled some concerns that central banks worldwide would boost interest rates. On Thursday, the bank’s leader said British regulators may have to ease off of the economic stimulus faster than expected. “It will likely be necessary to raise interest rates somewhat earlier and to a somewhat great extent than we had thought,” Gov. Mark Carney said during a news conference.

As scary as those developments may sound, a correction—technically, a drop of about 10%—can be considered healthy, or even a buying opportunity for investors who think the market may still have further to run. Higher interest rates, meanwhile, give central banks more leeway to stimulate the economy; should it fall into a recession, banks can trim rates again. The current bull market has run on for nearly nine years now, making it the second longest in history.

Despite the fears the correction may fan, economists and analysts generally point to recent strong corporate earnings figures among other indicators as a sign that the current slide won’t deepen.

“Seen over a longer period the correction in the stock market is relatively small and is likely to have no impact on the macro economy,” said Torsten Sløk, chief international economist at Deutsche Bank, in a statement.

That said, don’t think Thursday will be the last day of volatility.

“You’ve had a change in the environment; people were positioned for low volatility, low interest rates and low inflation,” said Brent Schutte, chief investment strategist at Northwestern Mutual Wealth Management. “Now you have people moving portfolios around. I don’t think one or two days of selling is going to clean house. I think we have a few more days to go.”