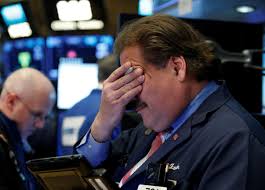 Worries about a stock market crash may have abated, with the selloff in major indexes including the Dow Jones Industrial Average and S&P 500 taking a turn for the better by the market’s close Tuesday.

That came after a two-day selloff that erased the Dow and S&P 500’s gains from 2018, as investors appeared spooked by the specter of rising inflation and higher interest rates.

Generally, stock market watchers appear bullish on U.S. equities as market fundamentals including unemployment, company earnings, and GDP both in the U.S. and globally remain strong.

The stock market appears to have hit a turning point of sorts, though, with investors growing more uncertain of its continued gains, and seeking to feel out the top.

“We see the market selloff entirely disconnected from fundamentals,” J.P. Morgan analysts led by Dubravko Lakos-Bujas wrote in a Tuesday note. “While the sharp rise in volatility may contribute to further outflows from systematic strategies in the short-term, we believe fundamentals should ultimately prevail as companies continue to deliver on double-digit earnings growth on U.S. tax catalyst, global synchronized growth, and weaker U.S. dollar.”

So what should investors expect?

“So in some sense we have to get used to a greater volatility level,” Bogdanova said.

Who could this hurt?
Given that the stock market hasn’t fallen into a bear market just yet, the pain will be relatively short-lived, and more psychologically painful than anything else.

Still, the selloff in the Dow, S&P 500, and other major indexes has still been stressful to investors, who have been wondering when a bear market is coming. Historically, the longest bull market lasted for just over nine years. The current run is already the second-longest.

And there is reason for the concern to be widespread. Notably, while analysts say major indicators don’t point to a crash in the near future, about 54% of Americans held some stocks between 2009 and 2017, according to a Gallup poll.

And while the stock market is not the general economy, it can certainly have an impact on it.

Investors may shy away from spending if they see their net worth is falling. Companies may also have less flexibility to invest in themselves, as a bear market makes it far harder to fundraise, including by issue stock.

A bear market can be especially painful for new retirees heading into the market with heavy stock market holdings. Due to a dynamic known as sequence of risk returns, such retirees may dip into their nest egg in a bid to make ends meet, rapidly depleting their holdings during a bear market. While a retiree starting into a bull market may see their investments replace that hole, a retiree starting in a bear market will see their portfolio deplete at a far faster rate, making it much harder to build their portfolios back up once they re-emerge in a more bullish environment.

Though investors don’t seem to have to worry about a bear market just yet if the economic indicators prove correct.

So how should investors play this selloff?
Certainly not with panic, says Bogdonova. She says not the economic indicators “are not flashing red—they’re not even flashing yellow.”

Investors can take this moment to reassess their portfolios, she added, rebalancing between stocks, bonds, and other assets as they seek to understand exactly how much risk they are willing to take.

And further down the road, as the volatility plays out, investors may find opportunities in the stock market.

“While we expect this pullback to eventually create opportunities for those seeking to increase equity exposure, traders should still exercise extreme patience before adding to positions, as there are few signs of capitulation at this point,” Randy Frederick, vice president of trading and derivatives for Schwab said in a statement.

Goldman Sachs on Monday, meanwhile, commented that the market could swing either way, suggesting that investors should consider hedging their bets with options.