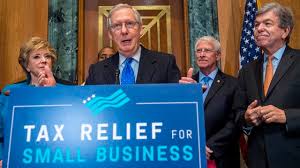 Companies wasted no time announcing plans to use some of their steep tax savings to boost their workers.

Wells Fargo(WFC) and Fifth Third Bancorp (FITB) said they plan to hike their company-wide minimum wages to $ 15 an hour. Other firms including Comcast (CCZ) and AT&T promised $ 1,000 bonuses.
Congressional Republicans on Wednesday pushed sweeping tax reform legislation through both chambers, and it now heads to President Trump for his signature. Among other things, it will slice the corporate tax rate to 21% from 35%.

The White House has argued strenuously that the measure will be a boon for workers, as companies plow their tax savings into wages and jobs. Many economists argue that corporations will use the funds to benefit their investors through stock buybacks and bigger dividends.

Exactly how it will play out remains a topic of fierce debate. Here’s a rundown of what companies are pledging they’ll do for workers.

In a statement, AT&T CEO Randall Stephenson hailed “Congress, working with the President” for taking a “monumental step” that will “create good-paying jobs.”

(AT&T (T) is seeking to acquire Time Warner, CNN’s parent company. The Department of Justice sued to block the deal in November.)

The aerospace giant said it will spend $ 300 million on workers. The funds will be split evenly among worker training, upgrading facilities and a program that matches employees’ charitable contributions.

Boeing CEO Dennis Muilenburg “praised” the tax bill as “a critical driver of business, economic growth and innovation for the United States and for Boeing,” according to a press release.

Related: Why now is not the time for expensive tax cuts

The telecom firm, which owns NBCUniversal, said it will give out “special” $ 1,000 holiday bonuses to more than 100,000 “frontline and non-executive” employees.

Comcast also expects to “spend well in excess of $ 50 billion over the next five years investing in infrastructure to radically improve and extend our broadband plant and capacity, and our television, film and theme park offerings,” according to a press release issued Wednesday night. “With these investments, we expect to add thousands of new direct and indirect jobs.”

The financial services company says it will raise its company-wide hourly minimum wage to $ 15, signaling a pay raise for about 75% of its employees.

CEO Greg Carmichael attributed the move to the tax legislation. “The tax cut allowed the bank the opportunity to reevaluate its compensation structure and share some of those benefits with its talented and dedicated workforce,” the company said in a statement.

The bank also said it will increase its charitable giving by about 40% to $ 400 million.