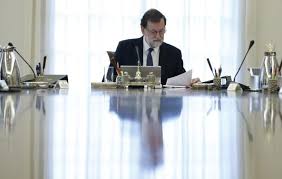 The Spanish government will sack Catalonia’s secessionist leadership and force the region into a new election, it decided on Saturday, unprecedented steps it said were needed to prevent the region breaking away.

The plan, which requires parliamentary approval, is Madrid’s bid to resolve the country’s worst political crisis in four decades, but it risks an angry reaction from independence supporters, who planned street protests later in the day.

Outlining the cabinet’s decision, Prime Minister Mariano Rajoy said Catalonia, which accounts for a fifth of Spain’s economy, was already in worrying economic shape as a result of the regional government’s push for independence.

“We will ask the Senate, with the aim of protecting the general interest of the nation, to authorise the government … to sack the Catalan president and his government,” Rajoy told a news conference.

Spain’s upper house of parliament is scheduled to vote on the plan next Friday.

It is the first time since Spain’s return to democracy in the late 1970s that the central government has invoked the constitutional right to take control of a region.

Direct rule will give Madrid full control of the region’s finances, police and public media and curb the powers of the regional parliament after it allowed an independence referendum that Madrid declared illegal.

Rajoy said he did not intend to use the special powers for more than six months and he would call a regional election as soon as the situation was back to normal.

“Our objective is to restore the law and a normal cohabitation among citizens, which has deteriorated a lot, continue with the economic recovery, which is under threat today in Catalonia, and celebrate elections in a situation of normality,” Rajoy said.

Catalan President Carles Puigdemont, was due to deliver an address at 9 p.m. (1900 GMT) after meeting with his government, his office said. He was also due to join the protests in Barcelona.

Puigdemont made a symbolic declaration of independence on Oct. 10, and on Thursday he threatened to press ahead with a more formal one unless the government agreed to a dialogue.

The Catalan parliament is expected to decide on Monday whether to hold a plenary session to formally proclaim the republic of Catalonia.

Catalan media have said Puigdemont could decide to dissolve the regional parliament himself immediately after independence is proclaimed and call elections before the Spanish senate makes direct rule effective.

Under Catalan law, those elections would take place within two months.

Pro-independence parties said the move from the centre-right government of the People’s Party (PP) showed the Spanish state was no longer democratic.

“The Spanish government has carried out a coup against a democratic and legal majority,” Marta Rovira, a lawmaker from Catalan government party Esquerra Republica de Catalunya, tweeted.

Anti-capitalist party CUP, which backs the pro-independence minority government in the regional assembly said: “Taken over but never defeated. Popular unity for the Republic now. Not a single step back.”

Catalan authorities said about 90 percent of those who voted in the referendum on Oct. 1 opted for independence. But only 43 percent of the electorate participated, with opponents of secession mostly staying at home.

The main opposition in Madrid, the Socialists, said they fully backed the special measures and had agreed on holding regional elections in January.

“Differences with the PP on our territorial unity? None!” said socialist leader Pedro Sanchez.

Rajoy also received the backing of King Felipe, who said at a public ceremony on Friday that “Catalonia is and will remain an essential part” of Spain.

The independence push has brought on Spain’s worst political crisis since a failed military coup in 1981 several years after the end of the Franco dictatorship. It has met with strong opposition across the rest of Spain, divided Catalonia itself, and raised the prospect of prolonged street protests

It has also led Madrid to cut growth forecasts for the euro zone’s fourth-largest economy and prompted hundreds of firms to move their headquarters from Catalonia. Rajoy on Saturday urged firms to stay in the region.

Madrid has insisted that Puigdemont has broken the law several times in pushing for independence.

“The rulers of Catalonia have respected neither the law on which our democracy is based nor the general interest,” the government said in a memorandum to the Senate. “This situation is unsustainable.”

Pro-independence groups have mustered more than 1 million people onto the streets in protest at Madrid’s refusal to negotiate a solution.

Heavy-handed police tactics to shut down the independence referendum were condemned by human rights groups, and secessionists accused Madrid of taking “political prisoners” after two senior independence campaigners were jailed on charges of sedition.

Hacking group Anonymous on Saturday joined a campaign called “Free Catalonia” and took down the website of Spain’s constitutional court.

Spain’s national security department had said on Friday it was expecting such an attack to take place, though nobody was available on Saturday to confirm it.