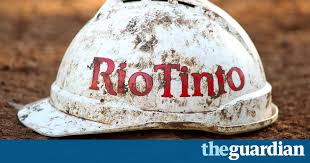 Rio Tinto accused of fraud over ‘$3 billion’ coal mine

One of the world’s biggest mining companies and two of its former top executives are in trouble for allegedly overstating the value of a mine in Africa by billions of dollars.

Authorities in the U.S. and the U.K. have accused Rio Tinto (RIO), its former chief executive Tom Albanese and former finance chief Guy Elliott of hiding from shareholders the true value of a coal mine in Mozambique that the company bought for $ 3.7 billion in 2011.
The U.S. Securities and Exchange Commission claims that Rio Tinto realized the mine was worth significantly less within a year of purchasing it, but did not share that information with investors until 2013. In a filing with a district court in New York, the SEC accused the company and the two former senior executives of fraud.

The U.K. Financial Conduct Authority said there were indications that the mine should have been revalued when the company was reporting mid-year earnings in 2012, and the failure to do so represented “a serious lack of judgment.”

In a statement, Rio Tinto said it would “vigorously defend itself” in the SEC case. It said it had settled separately with the FCA — the U.K.’s financial market regulator — and will pay a fine of about £27 million ($ 36 million) for failing to carry out an impairment test of the value of the mine.

“Rio Tinto believes that the SEC case is unwarranted and that, when all the facts are considered by the court, or if necessary by a jury, the SEC’s claims will be rejected,” it said.

“The FCA made no findings of fraud, or of any systemic or widespread failure,” the company added.

Rio Tinto agreed to settle at an early stage of the FCA investigation, otherwise it would have been fined $ 51 million.

In its complaint filed Tuesday, the SEC accused Rio Tinto, Albanese and Elliott of trying “to conceal the rapid and dramatic decline in value” of the coal business.

The mining giant continued to value the business at more than $ 3 billion through 2011 and 2012 even after discovering early on that it could sell “only about five percent” of the coal it had originally anticipated, and that the mine had “significantly less and lower quality coal” than it initially assumed, the SEC complaint states.

The company ultimately sold the Mozambique mine for just $ 50 million in 2014.

Albanese was removed from the top job at Rio Tinto in 2013 after the company wrote down the value of its assets by $ 14 billion. He resigned as CEO of another mining giant, Vedanta Resources (VEDL), in August.

In a statement on Wednesday, Albanese said there was “no truth” to any of the charges against him.

“I echo Rio Tinto’s confidence that these will be proved baseless in court,” he added.

A spokeswoman for Elliott told CNNMoney that the former Rio Tinto chief financial officer “fully refutes” the allegations and “will be vigorously contesting them.” He stepped down from oil giant Shell (RDSA), where he was serving as non-executive director, on Wednesday.

“We fully respect and appreciate Guy’s decision which is related to his involvement in legal proceedings regarding his former employment at Rio Tinto,” Shell chairman Charles Holliday said in a statement.