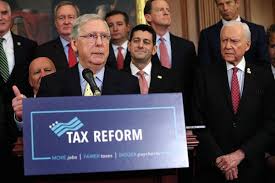 The GOP Tax Reform Plan Has A Huge New Flaw

The Republican Party has long championed granting companies a giant tax break for plowing funds into new plants, productivity-enhancing equipment, and groundbreaking IP. Indeed, no tax reform measure would do more to recharge America’s tepid growth than a blueprint that radically lowers the cost of fresh capital investments. A surge in capex would create millions of new jobs, fast-track GDP, and if done right, even ease the looming threat of crushing deficits and debt.

The new GOP tax platform not only won’t do the job, it doesn’t come close.

In fact, the latest proposal is a major disappointment, because it aims far lower than the Republicans’ previous, super-ambitious blueprint. In late September, President Trump’s top economic advisers and GOP congressional leaders unveiled their long-awaited framework for tax reform. The nine-page outline proposes lowering the overall statutory tax rate from 35% to 20% for corporations, and from 39.6% to 25% for “pass-through” businesses, levied on the owners’ individual returns.

On page 7, the framework addresses the crucial issue of “expensing capital investments,” and its proposal amounts to a surprising retreat. The proposal advocates allowing businesses to “immediately write off (or ‘expense’)” the cost of newly-acquired assets, but with two big exceptions—and those exceptions are the killers. First, the 100% deductions would apply mainly to machinery, equipment and IP, and would exclude all “structures,” meaning factories, the backbone of America’s capital stock. Second, the new regime would remain in force for “at least five years,” after which it would either expire or need to be re-enacted by Congress. And a temporary, sunsetting reform package that moves the tax code in the right direction then reverses course is barely better than none at all.

Those two exceptions are designed to minimize the loss of federal revenue from full-expensing. That’s a crucial objective, because in order to pass with just 51 votes, no tax reform package is permitted to raise deficits beyond their current projected level in 2027. And prominent GOP budget hawks led by Sen. Bob Corker of Tennessee have pledged to oppose any proposals that swell deficits and debt.

By contrast, the House Republican proposal from June 2016 was a lot more daring, and a lot more expensive. It recommended 100% expensing for all capex, including plants and other buildings, and also proposed making the new system permanent. According to the free-market-leaning Tax Foundation, the House blueprint would have slashed future receipts from the corporate income tax by $ 1.45 trillion from 2018 to 2027, even assuming a strong boost to economic growth. That would shave 37% from the $ 3.9 trillion the CBO projects that the corporate levy will collect over that period under current law, and raise the projected annual deficits by as much as $ 200 billion by 2027, or 14%.
Turning a tiger into a mouse

It was the House plan’s gigantic cost that the new framework sought to minimize. By eliminating the break for “structures” and restricting it to five years, the new framework would shrink the 10-year revenue loss to $ 379 billion in the Tax Foundation forecast—once again, projecting that the provision swells all federal revenues by lifting national income.

The GOP’s efforts to protect the budget turns a tiger into a mouse. Compared with the powerhouse House plan, says Kyle Pomerleau of the Tax Foundation, the new blueprint “would greatly limit the economic benefits of expensing.”

To understand why. let’s examine how immediate, 100% write-downs lower America’s cost of capital, and recharge the capital spending that powers economic growth. Imagine an appliance manufacturer that invests $ 1 billion in new equipment, and that the outlay generates $ 100 million a year in pre-tax profits that grow at 5% annually, or $ 5 million a year, just enough to keep the plant in good shape. The fridge-and-stove maker projects that the plant will last 20 years, so it will depreciate the $ 1 billion cost at an annual rate of $ 50 million.

But under today’s GOP plan, the manufacturer would immediately deduct the entire $ 1 billion investment, as opposed to $ 50 million, erasing all of its taxable income not just in year one, for most of the following decade. Its return on investment would jump from 8.25% to 10%, since it would pocket the full $ 100 million tax-free. The new 20% rate would apply to all its other income, but profits from new capital investment would get special treatment. Of course, total write-off of $ 1 billion remains the same; what changes is the timing. After around 9 years, the appliance-maker would exhaust all benefits from depreciation, whereas under the current system it would continue to gain deductions for an additional eleven years. The advantage of accelerated depreciation is that it front-loads the benefits, making the overall returns far higher over the full life of the equipment.

The benefits are obvious: Say a company has an internal “cost of capital,” or hurdle rate for investments, of the 8.25%—what our appliance maker would receive at today’s 35% rate. In our example, equipment generating $ 82.5 million a year would clear the bogey, whereas today the minimum is $ 100 million. Under the 100% expensing, investments that produce 17.5% less income suddenly become investment-worthy. “A lot more projects would become economically viable,” says Pomerleau. Hence, unfettered full expensing would steer gigantic sums away from buybacks and dividends and into new plants, patents, and efficiency-expanding equipment.

The new framework’s restrictions, however, substantially blunt the potential power of expensing. According to the Tax Foundation, the full-bore House proposal would have been potent indeed. A regime of unrestricted, permanent, 100% expensing would raise GDP growth by 0.4% a year for a full decade, lifting national income a total of 4.3% by 2027. On the other hand, the new plan excludes two-thirds of America’s capital stock, plants, warehouses and other structures, from the benefits of full expensing. The five-year limitation is another downer. Companies are certain to make more new investments in those first five years, and even pull forward spending scheduled for later periods to reap the big tax break while it’s still in force. But when the provision expires around 2023, they wouldn’t renew projects that were investment-worthy at full-expensing but no longer make sense when the old depreciation rules return.

As a result, the Tax Foundation reckons that the framework would trigger only a small, temporary spike in national income. It projects that GDP would expand by just 0.18% a year for the five years the new rules apply, less than half of the gain projected under an unrestricted plan. In total, GDP would be 0.78% higher in half-a-decade, but even those gains would fade, as companies failed to renew older projects, and invesedt less because they gorged on capital spending to benefit from the big break before it went defunct.

To be sure, if the corporate rate does drop to 20%, that alone will lower the cost of capital investments. But the strongest push would come from unlimited full expensing, and that’s now off the table.
A better fix?

So the best approach is to champion full expensing––in a totally different, budget-friendly form. For the Tax Foundation, the framework is ignoring a far better approach that marries a big carrot for capital investment with budget restraint. The solution is called “depreciation indexing” or “neutral cost recovery.” Businesses rightly argue that when they depreciate a $ 1 billion investment over 20 years, they don’t write off anything close to $ 1 billion in 2017 dollars. The $ 50 million they deduct in year 20 is worth a fraction of its value today, if, for example, that money were earning interest at the market rate. Tax policy should aim at allowing companies to deduct the full spending on capex in an amount equal to the dollars they spent when they built the plant or bought the gear by building in an escalator that raises the deduction each year. That’s the economic equivalent of deducting the present value of every dollar flowing into capex.

Here’s how depreciation indexing would work. Instead of deducting $ 50 million a year for 20 years, the company would be able to write off the present value of that $ 50 million each year by adding an interest reflecting, as the Tax Foundation puts it, “inflation and the time value of money.” Say that rate is 6%. In 20 years, a company would actually deduct not $ 1 billion but $ 3.2 billion in nominal dollars. That’s the real number needed to recover $ 1 billion spent today.

Indexed depreciation would also lift the obstacle that so weakened the new plan: The huge loss of revenue from immediate, 100% expensing. According to the Tax Foundation, indexing would cost 90% less over the next ten years than unfettered the expensing the House GOP proposed.

Currently, two dozen OECD nations allow much higher write-downs than the U.S. using indexing or similar solutions that increase the amounts that can be deducted over time, among them Switzerland, South Korea and Spain. Italy and Belgium use systems similar to full depreciation indexing, called “notional interest deductions.”

Clearly, the looming fiscal crisis has Republicans in a box. They’re retreating on their most pro-growth proposals to forestall a battle with budget hawks who rightly fear an explosion in deficits and debt. Unfortunately, the path they’ve chosen on the single most important lever to driving growth goes nowhere. The best solution sounds wonky and unsexy compared to advertising “an unprecedented expensing for business investments,” but it’s the way to go.