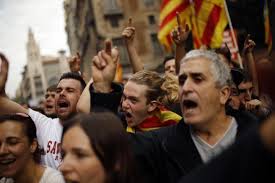 Catalan Banks May Move Elsewhere in Spain Thanks to Independence Crisis

Spanish banks that have their headquarters in Catalonia are reportedly planning to move their corporate addresses elsewhere in the country in order to maintain liquidity in the case of Catalonian secession.

According to a Thursday morning La Vanguardia report, the board of Banco Sabadell bndsy (based in the city of the same name) will meet in the afternoon to approve the contingency plans, which the paper’s sources suggest would involve a move to either Alicante or Madrid.

Meanwhile, El Mundo also reported that Barcelona-headquartered CaixaBank cixpf was considering temporarily registering its head office somewhere in the Balearic Islands. By remaining in Spain, the banks would remain under the umbrella of the European Central Bank.

Despite fierce criticism from the Spanish government and King Felipe, the Catalan government insists it will declare independence as early as this weekend or Monday. Last Sunday, those voting in a highly controversial referendum overwhelmingly opted for Catalan independence from Spain, although the nine-to-one weighting of the result was probably down to anti-independence voters staying away.

Banco Sabadell’s stock price took a hit of around 10% on this week’s turmoil, although it recovered slightly on Thursday morning’s reports. CaixaBank’s share price is also around 7% lower now than before the referendum.

In an interview with Bloomberg, Spanish finance minister Luis de Guindos said Thursday morning that the banks were “quite solvent” and “strong.” However, he did not say whether they had suffered serious deposit outflows this week—a deposit run is what sunk Banco Popular earlier this year.

De Guindos said the banks were “totally ready to relocate their headquarters to other regions in Spain,” though he also said secession would not happen.

Some companies have already announced similar plans following the referendum. Telecommunications firm Eurona saw its stock pop by 8% after it said it would move its headquarters from Barcelona to Madrid, while biotech outfit Oryzon—which has announced the same move—saw its stock price rise by almost 13%.