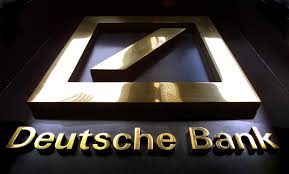 The head of Germany’s largest commercial bank warned of the fallout from cheap money, cautioning against using the strong euro as a justification for printing more.

Bloomberg reports that the Deutsche Bank Chief Executive Officer John Cryan called for an end to the era of cheap money in Europe, saying that the prolonged period of rock-bottom interest rates is starting to inflate asset bubbles and putting the bank at a disadvantage to U.S. rivals.

“I welcome the recent announcement by the Federal Reserve and now also from the ECB that they intend to gradually bring their loose monetary policy to an end.”

Low interest rates, money printing and a penalty charge for hoarding cash have been at the heart of attempts by the central bank to reinvigorate the 19-country euro zone economy in the wake of the 2008-09 financial crisis.

Reuters reports Cryan told a room full of bankers in Frankfurt on Wednesday, a day before the ECB’s governors meet to discuss policy, that:

“In the first half of 2017 alone the net interest income of U.S. banks rose by eight percent, in Europe it fell by two percent. We at Deutsche Bank had access to over 285 billion euros of liquidity at the end of the second quarter, because we are now receiving huge cash inflows. This money, which actually constitutes the strength of a bank, is costing us penalty interest.”

And finally took at jab at the Brexiteers, noting that Frankfurt was the most natural location as a financial hub as banks move from London after Britain’s decision to leave the European Union – ahead of Paris, Dublin and Amsterdam.

In conclusion, Cryan urged that The ECB should “wave goodbye” to loose monetary policy because while it helped banks, financial markets and individual countries emerge from the financial crisis, it’s now causing “ever greater upheaval.”