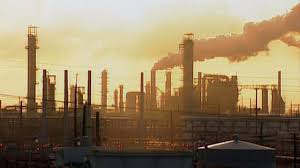 European flotilla is bringing gas to the U.S.

A fleet of tankers is set to sail from Europe with millions of gallons of gasoline for the United States.

The flotilla should ease any gas shortages resulting from Harvey, the monster storm that’s been battering the Gulf Coast and forcing refineries and pipelines to close.

The number of tankers booked to sail from Europe has doubled this week to roughly 40, said Richard Matthews of Gibson Shipbrokers. Other ships bound for ports in West Africa and Europe have been diverted to the U.S., according to energy information provider Genscape.

Thirteen U.S. oil refineries have been shut down or are in the process of closing, while several others are operating at reduced rates. The disruption has knocked out about a fifth of the nation’s refining capacity, according to S&P Global Platts.

“In terms of geography, this hurricane has hit the heart of the U.S. refining sector, and probably couldn’t have hit a more pivotal energy hub if it tried,” said Matthews.

The Colonial Pipeline, which transports more than 100 million gallons of gasoline and other fuels between Houston and the East Coast each day, has also been taken offline.

Trucks, barges and other pipelines can be pressed into service in order to keep supplies moving. But they may not be enough. Genscape said it estimated 111,000 metric tons (39 million gallons) of European gasoline had already been diverted to America.

The shipments could prove to be lucrative, with gasoline futures jumping 11% in the U.S. on Thursday. Demand for imports could spike even higher because of increased consumption over Labor Day weekend.

Matthews said that some of the tankers booked in Europe could be diverted mid-voyage to Latin American ports in order to compensate for supplies that would normally be exported from the U.S. Jet fuel shipments from Asia to the West Coast of the U.S. also appear to be picking up, he added.

Harvey hasn’t made much of a difference to gasoline prices at the pump yet. But U.S. gas stations will eventually have to respond by raising prices for consumers, at least temporarily.