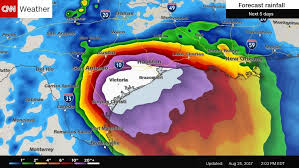 Investors are now trying to measure the impact of the devastation on the region’s economy.
The storm forced the evacuation and shutdown of several refineries, sending gas prices up. Corpus Christi port personnel are working to assess the damage.

Texas residents, especially those without flood insurance, are now grappling with the financial burden of rebuilding their homes. It could cost nearly $ 40 billion to reconstruct homes damaged along the Texas coast, according to an estimate by CoreLogic.

2. Jobs report: It’s that time again. On Friday, we’ll find out how many jobs were added in August.

The labor market has been thriving, with more than a million jobs added since President Trump took office. Economists expect the economy will add 180,000 jobs this month, according to FactSet.

In July, employers added an impressive 209,000 jobs, according to the Labor Department. The unemployment rate fell slightly to 4.3%.

3. Round 2 of NAFTA talks: Trump’s team will take another stab at renegotiating NAFTA, a controversial trade deal between the U.S., Canada and Mexico.

Top U.S. trade official Robert Lighthizer and his Mexican and Canadian counterparts will meet in Mexico City beginning on Friday for the second round of at least seven talks, which will focus on “modernizing” the agreement.

The stakes are high: Millions of U.S. jobs and thousands of companies depend on the deal.

The president put negotiations on thin ice last week when he told supporters in Arizona: “I think we’ll end up probably terminating NAFTA at some point.”

It’s not the first time Trump has slammed the deal, which he believes is unfair to American workers. During his campaign, Trump called NAFTA “the worst trade deal” in American history.

Related: Trump is playing the ‘bad cop’ in NAFTA negotiations

The retailer’s stock is up 55% this year despite competition from Amazon (AMZN, Tech30). Sales for last quarter are expected to clock in at $ 8.7 billion.

The company’s CEO Denise Morrison criticized Trump’s response to the violence in Charlottesville, Virginia. She was one of eight executives to quit Trump’s business councils over his remarks, before the councils were disbanded altogether.