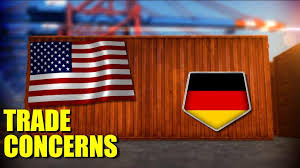 Germany has warned that the U.S. and Europe might be heading for a trade war.

“There are things that cause us great concern that the United States is starting a trade war against Europe. This would, of course, trigger a reaction in Europe,” Foreign Minister Sigmar Gabriel told German radio station Deutschlandfunk.

“That hurts us, but it also hurts the Americans,” he added.

Gabriel did not expand on why he was worried but the blunt warning from Germany’s second most senior politician came just hours before a meeting between President Trump and Chancellor Angela Merkel.

“We are concerned with some of the signals coming out of the U.S. and we have conveyed those concerns to our American friends,” she told CNNMoney’s Maggie Lake.

On Wednesday, Merkel repeated previous criticism of Trump for his approach to global trade.

“While we are looking at the possibilities of cooperation to benefit everyone, globalization is seen by the American administration more as a process that is not about a win-win situation but about winners and losers,” she was quoted as saying in an interview with German magazine Die Zeit published on Wednesday.

The remarks are the latest escalation in a war of words between the two countries.

Trump has criticized Germany on several occasions. He said the country was “very bad for trade” and slammed it for running a big trade surplus.

“We have a MASSIVE trade deficit with Germany, plus they pay FAR LESS than they should on NATO & military. Very bad for U.S. This will change,” he tweeted in May.

He has suggested that America’s trade deficit with countries such as Germany, Japan and Mexico means the U.S. is losing the global economic game.

In response to Trump’s withdrawal from the Paris climate accord and his tilt towards protectionism, Merkel, who is facing an election later this year, has been championing free trade and cooperation on the environment.

Speaking to the German parliament last week, she said that “anyone who believes they can solve the problems of this world with isolationism and protectionism is making a big mistake.”