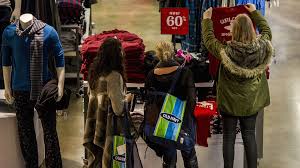 U.S. Retail Sales Had Their Biggest Drop in Over a Year

U.S. retail sales in May recorded their biggest drop in 16 months and consumer prices unexpectedly fell, suggesting a softening in domestic demand that could limit the Federal Reserve’s ability to continue raising interest rates this year.

The Fed is expected to increase borrowing costs later on Wednesday, but the signs of moderate consumer spending and retreating inflation pressures could worry policymakers who have previously viewed the softness as transitory.

“It won’t stop the Fed from hiking interest rates later today, but it increases the downside risks to our forecast that there will be a further two rate hikes in the second half of this year,” said Paul Ashworth, chief U.S. economist at Capital Economics in Toronto.

The Commerce Department said retail sales fell 0.3% last month amid declining purchases of motor vehicles and discretionary spending after an unrevised 0.4% increase in April. May’s decline was the largest since January 2016 and confounded economists’ expectations for a 0.1% gain.

Retail sales rose 3.8% in May on a year-on-year basis. While some of the drop in monthly retail sales reflected lower gasoline prices, which weighed on receipts at service stations, details of the report were generally weak.

Excluding automobiles, gasoline, building materials and food services, retail sales were unchanged last month after an upwardly revised 0.6% rise in April. These so-called core retail sales correspond most closely with the consumer spending component of gross domestic product and were previously reported to have increased 0.2% in April.

Consumer spending accounts for more than two-thirds of the U.S. economy and last month’s weak core retail sales reading could temper expectations for a sharp acceleration in economic growth in the second quarter. The economy grew at a 1.2% annualized rate in the first quarter, held back by a near stall in consumer spending and a slower pace of inventory investment.

Output increased at a 2.1% pace in the October-December period. The Atlanta Fed is forecasting GDP rising at a 3.0% annualized rate in the second quarter.

In a separate report, the Labor Department said its Consumer Price Index dipped 0.1%, weighed down by declining prices for gasoline, apparel, airline fares, communication and medical care services, among others. The CPI rose 0.2% in April.

The Fed has a 2% inflation target and tracks an inflation measure which is currently at 1.5%.
Retreating Inflation Pressures

While the U.S. central bank is expected to raise interest rates by 25 basis points on Wednesday, the second hike this year, the weakness in inflation and retail sales, if sustained, could put further monetary tightening in jeopardy.

The dollar fell against a basket of currencies on the data, while prices for U.S. Treasuries rose. U.S. stock index futures pared gains.

The year-on-year gain in the CPI in May was still larger than the 1.6% average annual increase over the past 10 years. Economists polled by Reuters had forecast the CPI unchanged last month and advancing 2.0% from a year ago.

The so-called core CPI, which strips out food and energy costs, rose 0.1% in May after a similar gain in April. The core CPI increased 1.7% year-on-year, the smallest rise since May 2015, after advancing 1.9% in April.

Gasoline prices tumbled 6.4%, the largest drop since February 2016, after jumping 1.2% in April. Food prices rose for a fifth straight month.

In the retail sales report, auto sales fell 0.2% after rising 0.5% in April. Receipts at service stations dropped 2.4%, the largest decline since February 2016. Sales at building material stores were unchanged, while receipts at clothing stores rose 0.3%.

Sales at online retailers increased 0.8% last month after rising 0.9% in April. Sales at electronics and appliance stores plunged 2.8%, the largest drop since March 2010. Receipts at restaurants and bars dipped 0.1%, while sales at sporting goods and hobby stores fell 0.6%.