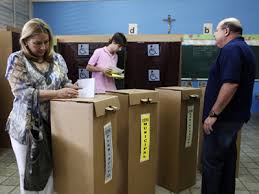 Puerto Rico votes to be 51st state but…

Puerto Ricans voted overwhelmingly Sunday to become the 51st U.S. state, but there is no celebrating yet.

Only Congress can make Puerto Rico a state, and there’s little appetite to do that right now. Congress is a lot more concerned about the island’s massive bankruptcy. President Trump has made it clear that he will not bail the island out.

Puerto Rico has a huge debt load of $ 70 billion — or about $ 20,000 for every man, woman and child living on the island. The U.S. territory filed for the largest municipal bankruptcy in U.S. history in May.

“Today, we the people of Puerto Rico, are sending a strong and clear message to the world claiming our equal rights as American citizens,” Governor Ricardo Rosselló said, calling it a “historic election.”

Rosselló is heading to Washington this week to try to convince Congress that statehood is best for the island, but it’s unclear whether that would help stop the downward spiral of the island’s economy.

“There’s not going to be a big appetite to bring in a bankrupt state,” says Marc Joffe, a bond expert who is currently director of policy research for the California Policy Center.

The debt is only part of the problem. Puerto Rico has been in recession for almost a decade. The unemployment rate is 11.5% (compared to just 4.3% for the U.S. overall). Home values are plunging.

What would statehood help?

As U.S. citizens, Puerto Ricans can simply pack up and move to the mainland U.S. for better job and educational opportunities. The island has lost 10% of its population in the past decade. Many of those who are leaving are the best educated workers who can easily get jobs in Texas, Florida or New York. A doctor a day is leaving the island, creating a dire health crisis.

Becoming a state would give Puerto Rico more say in Congress and more money for the U.S. government. The island is currently under the thumb of a Fiscal Oversight Board installed by Congress. One of the biggest complains on the island is that it receives a lot less money for programs like Medicaid than it would if it were a state.

Statehood would also make a lot of stuff cheaper on the island. Cars, for example, cost about 40% more in Puerto Rico than on the U.S. mainland. That’s because of an old rule called the Jones Act that forces goods to go the mainland first and then be shipped only on a U.S. vessel to Puerto Rico. That’s a lot more expensive than sending something from China directly to the island.

What’s next for Puerto Rico?

But becoming a state won’t magically solve the island’s deep problems. Here’s why.

1) Puerto Ricans don’t pay federal taxes right now. While becoming a state would give Puerto Rico additional rights, it would also mean people there would have to pay federal income taxes for the first time. That would be an additional burden on Puerto Ricans who are already struggling to pay enough in taxes to cover the island’s debts.

2) It won’t erase the debt. Becoming a state won’t magically eliminate the $ 70 billion debt. The island’s bankruptcy process is already under way. There will have to be a resolution between creditors and the island to pay back most, if not all, of the debt.

“Puerto Rico would probably have to clean up its debt before it could even become a state,” says Joffe.

Related: Puerto Rico’s crisis: How did it get so bad?

Still, many Puerto Ricans see statehood as about a lot more than the economy.

“I pray to God that before I die I see Puerto Rico as the 51st state,” Edwin Alicea, an Army veteran, told CNNMoney. “We don’t have representation in Congress, we don’t vote for the president, but they all come here for fundraisers, take our money, they send us to war.”

Over 1,200 young Puerto Rican men and women joined the military in 2015, according to Department of Defense figures shared with CNNMoney. That works out to just under 1% of the island’s population, a very similar percentage that most other states have joining the U.S. military each year.