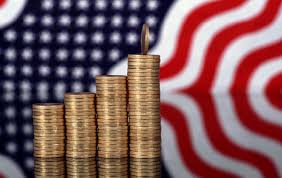 Donald Trump is setting up America for economic doom, at least according to Democrats, it seems.

Preliminary data released Friday showed a larger and growing portion of Democrats have lost faith in the economy, likely because of Trump. The University of Michigan’s Surveys of Consumers reports that when asked about expectations for the future, Democrats score a 55.3 on the index, a number that signals a “deep recession was imminent.”

Republicans, on the other hand, score 122.4 on the expectations index—a level that indicates “a new era of robust economic growth was ahead,” notes Richard Curtin, the economist who compiles the survey.

The gap between the two has recently been the widest on record. The extremes are partly fueled by “selective attention to economic news, with Democrats more frequently reporting unfavorable developments and Republicans more frequently hearing of favorable changes,” Curtin said in a press release.

In other words, as news readers stick to their own echo chambers, consuming news and opinions that validate their own viewpoints, they seem to be getting more entrenched in extreme viewpoints about the economy as well.

Interestingly, the extremes disappear, however, when you ask about current personal finances. The so-called “Current Economic Conditions” component of the survey reached its highest level since 2000 and was not impacted by partisanship, Curtin said.

This makes sense from a psychological perspective and points to why sentiment metrics can be tricky as economic indicators. When asked about something as large as the national economy, a person’s perception is impacted heavily by the types of opinions and media he or she consumes, whereas when asked about personal finances, an individual’s observations are a bit sharper, rooted in hard data like their latest paycheck, bills and prices at the gas pump and grocery store.

In a press conference Wednesday, Yellen noted the Fed is hesitant to put too much weight on consumer confidence metrics at this point.

“ It’s uncertain just how much sentiment actually impacts spending decisions, “ she said. “And I wouldn’t say, at this point, that I have seen hard evidence of any change in spending decisions based on expectations about the future.”