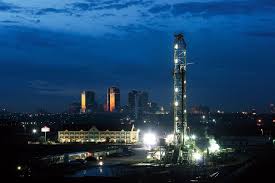 These Two Fracking Giants Are Getting Clobbered By Investors

Chesapeake (chk) , which is the second-largest natural gas producer in the U.S., fell nearly 8% in midday trading, while shares of Apache (apa) dropped more than 6%. (Both stocks had recovered somewhat by mid-afternoon.)

The two companies have been mired in a slump that has seen the futures price for natural gas fall from nearly $ 5.00 per thousand cubic feet in early 2014 to $ 2.68 today. The price of oil, too, has dropped dramatically over the same time frame, though its value has been on the rebound over the last year. Chesapeake has also been dealing with disarray following from the death of its co-founder and former CEO, Aubrey McClendon, in a car crash last spring.

Chesapeake actually posted adjusted earnings of $ 0.07 per share, which was in line with what analysts had expected. But it missed revenue predictions, coming in with $ 2.02 billion for the quarter. The company has moved to maintain its balance sheet during the recent downturn by drastically slashing jobs and unloading properties, but those actions have also meant production and revenue have been cut. Chesapeake produced only an average of 574,500 “barrels of oil equivalent” per day, a standard measure of gas production, during the quarter, down more than 13% from a year ago.

Apache missed analysts’ expectations across the board, posting revenue of just $ 1.45 billion and a loss of $ 0.06 per share. There was some upside for the company, though. Apache announced a capital budget of $ 3.1 billion for the year, which is a 60% increase over 2016. Apache is moving on from its recent strategy of frugality, instead shifting towards growth in the hope of drumming up better returns. The company said it produced 420,846 barrels of oil equivalent per day, down 14% from last year, but plans to increase production by 10% over the next year.

Consumption of natural gas is seasonal, with winter being the time of heaviest use. The mild weather that has persisted across much of the U.S. this winter has suppressed prices, and with spring on its way it doesn’t appear there will be any natural impetus to drive prices up in the near future.

There may be more tough times ahead for the sector, as well. The industry typically follows a cycle – when natural gas prices fall, companies cut back on production, which eventually leads to a bounce back in prices due to a lack of supply. The higher prices give companies incentive to start producing more, which floods the market with gas and drives the price down again, beginning the cycle all over. As of right now, it’s unclear when the companies will get their next “up” cycle for prices.