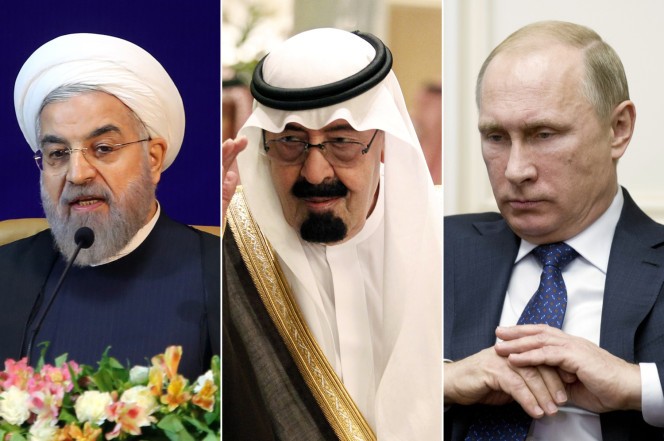 Iran signalled on Tuesday it was prepared to work with Saudi Arabia and Russia to prop up oil prices as Tehran began to bargain with OPEC on possible exemptions from output limits.

Iran has been the main factor preventing an output deal between OPEC and non-OPEC Russia as Tehran argued it should be excluded from any such agreement before its production recovers from Western sanctions that ended in January.

Iran’s rival Saudi Arabia has said it would agree to a deal only if Tehran took part. However, with Iranian production rising close to pre-sanctions levels, Riyadh has signaled in recent weeks it is ready to compromise.

Russia has also said it was ready to accept certain exemptions, especially as Iran was close to reaching output levels of 4 million barrels per day (bpd) after which it could no longer boost production further.

On Monday, Russia and Saudi Arabia signed a pact agreeing to work together to help balance the oil market but giving little detail on possible action to help eradicate a global glut.

On Tuesday, Iranian Oil Minister Bijan Zanganeh met OPEC Secretary-General Mohammed Barkindo in Tehran and said he would support any measure to stabilize crude prices at around $ 50-60 per barrel.

“Iran wants a stable market and therefore any measure that helps the stabilization of the oil market is supported by Iran,” Zanganeh said.

OPEC members will meet on the sidelines of the International Energy Forum (IEF), which groups producers and consumers, in Algeria on Sept. 26-28, during which they are expected to discuss a possible output freeze.

Russia is also expected to attend the IEF.

Most OPEC producers and Russia are pumping at capacity. Only Iran and potentially Iraq could raise output in the medium term.

The key question for a potential freeze, therefore, would be at which levels production is frozen.

If production is stabilized at early-2015 levels, it would effectively mean a cut as most producers – including Saudi Arabia, Russia, Iraq and Iran – have ramped up output since then.

Seyed Mohsen Ghamsari, director of international affairs at National Iranian Oil Co, said on Monday Iran was ready to raise production to 4 million bpd in the next two to three months depending on market demand. [nL3N1BH1NQ]

A source familiar with Iranian thinking said on Tuesday the Saudi-Russian pact was making a global output agreement more likely.

“Surely Iran at some point reached production capacity of slightly more than 4 million bpd, but actual production just before the imposition of sanctions was below 4 million,” the source said.

“The shuttle diplomacy is going on to clear which level is considered an aim for Iran,” he added.

A source familiar with Gulf thinking said if no compromise with Iran were found before the meeting in Algeria, there would be time to secure one ahead of OPEC’s regular gathering in November in Vienna.