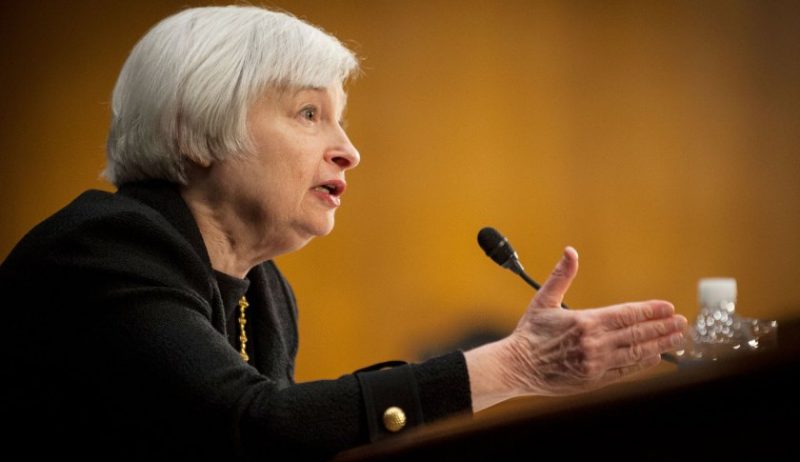 Janet Yellen and Wall Street investors can agree on one thing: The U.S. economy is a relatively good investment. That’s the takeaway from the Fed Chair speech Friday morning at the Kansas City Fed’s annual gathering in Jackson Hole, Wyo. Yellen had mostly kind words for Uncle Sam, saying that “in light of the continued solid performance of the labor market and our outlook for economic activity and inflation,” the case for raising interest rates again has gotten pretty strong of late.

Notably, markets apparently aren’t concerned about Yellen’s threat to raise rates, as the Dow rallied more than 100 points in the minutes after the speech concluded. Investors appear be confident that Yellen won’t tighten, a likely result of the Fed’s overconfidence since the financial crisis in it’s ability to normalize policy.

Yellen was most bullish on the American labor market, and it’s easy to see why. Wage growth is finally beginning to accelerate, as the U.S. economy has added on average 190,000 new jobs monthly this summer. That’s more than enough to tighten labor markets, and should be good news for consumer spending as well.

Investors were also likely comforted by the meat of Yellen’s speech, in which she discussed the changing Fed policy toolkit and reassured market watchers that the central bank has plenty of firepower to fight the next recession, whenever it may arrive. Larry Summers, the man Janet Yellen beat out for the job of Fed Chair, has warned of late that given the new normal of low interest rates and slow growth, the Fed will be unable to lower interest rates by a great enough magnitude to jolt the U.S. economy out of the last recession.

This idea, among many other criticisms, was picked up by the Wall Street Journal‘s Jon Hilsenrath this week in a scathing review of the Fed’s performance over the last twenty years. But Yellen answered Fed critics by arguing that with the Fed’s expanded toolkit in a post-financial crisis world, the Fed is ready and able to fight the next recession and prevent the next financial crisis. She lauded the Fed’s newest policy of paying interest on reserves to banks as a novel method for guiding interest rates higher during a time when the Fed has flooded the banking system with new money.

That likely gave the market confidence that Yellen is in no hurry to raise rates to beat the next recession. What’s more, Yellen hint that the Fed may in the future buy “other assets,” likely stocks, probably is something investors were cheering as well.

That said, it is likely worrisome for Fed governors that markets seem to be ignoring their threats to raise rates. Fed funds futures markets still think it’s unlikely that the Fed raises rates at all this year, despite Fed forecasts to the contrary and Yellen’s relatively hawkish speech Friday. This lack of trust gets to the heart of Hilsenrath’s argument. He points to Gallup polling that shows that just 38% of Americans have trust in Janet Yellen, down from over 70% during Alan Greenspan’s the final years of Alan Greenspan’s reign, and argues that investors have plenty of reason to be dubious of Fed forecasts.

Whether or not the Fed can manage to back up its increasingly hawkish communications remains to be seen. Either way, the Fed is in a poor position. If they follow through on a rate increase, it would go a long way to help the Fed’s battered credibility, but it might catch investors off guard, and the market reaction could be violent. If the Fed doesn’t follow through, investors will have more of a reason to give the Fed’s statements even less credibility in the future.

Yellen said her speech what the Fed found out in the wake of the financial crisis is that market are more fragile than it thought. The Fed is not as tough as it looked either.