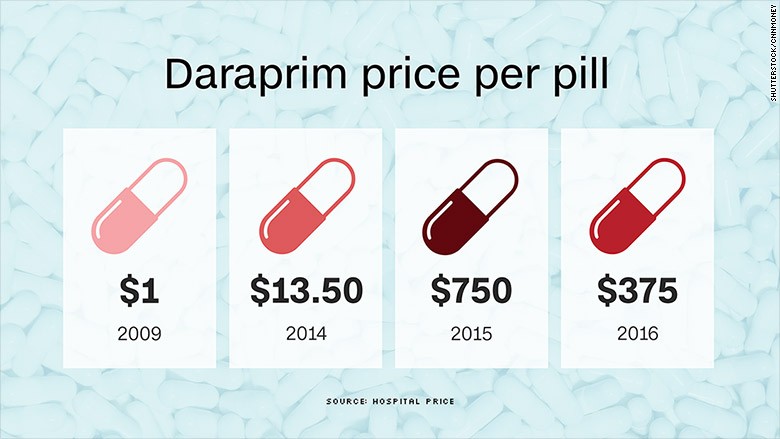 Outrage over the massive EpiPen price hike feels like deja vu. A year ago, America was in shock when a drug called Daraprim that’s used by some AIDS and transplant patients skyrocketed overnight from $ 13.50 to $ 750 a pill.

Hillary Clinton tweeted that the 5,000% spike was “outrageous” and amounted to “price gouging.” Nothing about the drug itself had changed except this: a new company — Turing Pharmaceuticals — had bought the rights to distribute it. The Daily Beast dubbed Turing’s CEO “the most hated man in America.”

A year later, one pill of Daraprim costs $ 375 for many patients. Turing hails this as a 50% reduction in price, but doctors are livid. The drug still costs 2,500% more than before the hike.

“It remains criminal,” say Dr. Wendy Armstrong, a medical professor at Emory University and head of the Infectious Diseases Program at Grady Health System in Atlanta, Ga. “It’s still an immense financial burden for a drug that should be $ 1 a pill.”

Turing says it has put in place programs to “ensure access to Daraprim for every single patient who needs the drug, regardless of ability to pay.” Controversial CEO Martin Shkreli also left the company late last year.

But doctors say the reality is Turing has created an expensive, bureaucratic hurdle for patients to get a drug that can save their life. And now other companies appear to be following the “Turing playbook.”

For 16 years, Dr. Armstrong has treated HIV and AIDS patients. Just last week, she was treating a patient with HIV who had developed a brain infection. The patient needed Daraprim, but the hospital ran out of the drug in the middle of the treatment. Patients typically need two to three Daraprim pills a day for weeks or months.

Dr. Armstrong requested more pills and immediately received a call from the hospital’s pharmacy. They told her the order for more Daraprim would have to go through the hospital review committee because it’s so expensive.

It’s a tough situation for Dr. Armstrong, who remembers when Daraprim cost only $ 1 a pill. That was the price until 2010, when CorePharma bought the rights to market and distribute Daraprim in the U.S. from GlaxoSmithKline. CorePharma soon hiked the price to $ 13.50 a pill and watched its revenues climb.

In 2015, CorePharma sold the U.S. rights of Daraprim to Turing, which raised the price to a whopping $ 750 a pill.

The ‘Turing playbook’ is spreading

Dr. Judith Aberg was one of the first to sound the alarm bell by speaking to the New York Times. She’s head of infectious diseases at the Icahn School of Medicine at Mount Sinai in New York City and a well known HIV and AIDS researcher.

“A year later, it’s still frustrating,” Dr. Aberg told CNNMoney. “What’s more frustrating is that other companies are following Turing’s lead. At some point, our economy can’t support this.”

This week, outrage erupted again over the dramatic rise in costs of EpiPens that many rely on to save them from life-threatening allergic reactions. A standard two-pack of EpiPens now costs about $ 600. The price was $ 100 in 2009.

The CEO of the company that makes the EpiPens is using many of the same arguments that Turing did when it raised the price of Daraprim. She’s blaming the broken health care system, arguing programs are in place to help those with great financial need and saying the company needs profits to fund research. Former Turing CEO Shkreli has been tweeting his support.

Daraprim still only costs $ 1 or $ 2 a pill abroad. Turing only has the U.S. rights to distribute it. Doctors around the world have flooded Dr. Aberg’s inbox with offers to send her supplies from their countries.

“It’s not illegal what they’ve done [at Turing], but it’s unethical and immoral,” says Dr. Aberg “This is affecting patient care.”

As hospitals try to keep costs downs, doctors have been discouraged from using Daraprim. Dr. Aberg says her team used to prescribe it about five times a month. Now they’re down to using it once, if that. They have turned to alternatives that aren’t nearly as well tested with unknown side effects.

High hurdles to get Daraprim cheaply

Turing has made a big deal about programs it has created to reduce the costs for patients. For instance, it says that the drug is available for free to people with deep financial need.

But Dr. Aberg has watched her patients have to “jump through the hoops” to get it. Patients have to prove both financial need and health status, something that’s difficult to focus on when their lives are in danger. In June, one of her patients gave up on the process. The patient switched therapies, only to suffer a negative side effect.

The application also requires patients to sign broad disclosures “to use and disclose all of my individually identifiable health information.” Dr. Aberg says some patients, especially with HIV and AIDS, are hesitant to do that.

The actual price that patients pay

Turing argues that “approximately two-thirds of Daraprim sales are to federal and state health programs that pay Turing just 1 cent per pill.”

It’s true that Medicaid and certain AIDS clinics — known as 340B programs — get a reduced rate. But again, patients have to apply to be in those programs and facilities. Dr. Armstrong currently has a patient with a brain infection who she’s trying to get into a 340B program.

“This is a big burden for someone with a very significant brain infection and (not able to think clearly) currently,” says Dr. Armstrong. “It’s layers or hurdles for people that already have challenges.”

Then there’s people with insurance. An expensive drug like Daraprim is often put in a top tier, meaning a patient has a higher than normal copay.

Even at a 20% copay, a four-month supply of Daraprim at two pills a day would mean a patient paying about $ 18,000 out of pocket.

Turing has said it needs the profits on the drug in order to fund research and development of new drugs, including potential new treatments for toxoplasmosis, the infection that Daraprim treats.

But doctors and patients wonder why a drug that has worked so well for more than 60 years needs any changes at all.