Warren Buffett’s latest trades were just revealed via Berkshire Hathaway Inc.’s (BRK.B) 13F filing, which is a filing that gives us information on all of the transactions that took place over the second quarter of 2016 — the quarter ending June 30 — in the stock portfolio managed by the legendary investor.

This filing can provide some valuable insight into where Warren Buffett thinks the best investments might lie.

Now, it might not make sense to piggyback on his trades and simply buy and/or sell whatever he has because these filings are generally released 45 days after the most recent quarter ended, but it would appear to be an intelligent move to investigate exactly where the most successful investor of all time is (and isn’t) putting his capital to work.

Below, I’m going to go over every transaction and give some quick thoughts on each respective company.

I’m going to do my best to infer what each purchase and sale means, but it’s obviously impossible to know exactly what Warren Buffett or his lieutenants were thinking when each transaction was executed.

Please keep in mind this list is for informational purposes only, and is not a recommendation to buy any specific stocks.

Apple Inc. designs, manufactures, and markets a variety of consumer electronics, including smartphones, tablets, personal computers, smartwatches, and portable music players. They’re vertically integrated with software and hardware. They also offer a variety of services designed to be used on and for their products. 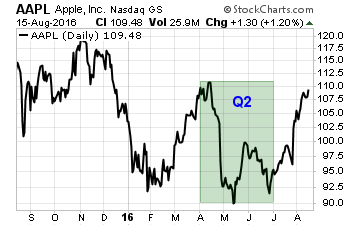 This was a big move – we’re talking about more than $ 500 million here.

However, we also know that Buffett wasn’t behind this, as the company announced last quarter that Buffett had nothing to do with the Apple investment.

Nonetheless, this is a strong value play.

Apple’s stock is priced at a P/E ratio of 12.79 right now – and that’s after a 20% run over the last three months (we don’t know exactly when Berkshire bought its shares). Back out the over $ 200 billion in cash the company has on the balance sheet and the stock is very cheap on a net basis.

Berkshire has a longstanding track record of not investing in the next tech trend, or even much tech at all. However, Apple is really easy to understand. They’re basically a phone company. Their major product, by far, is the iPhone, which isn’t hard to understand at all. Communication is more ubiquitous than ever, and people are practically addicted to their mobile phones.

Berkshire also has a longstanding track record of buying high-quality companies when they’re cheap. And I think Apple more than qualifies for both. The stock is priced at a level almost half the broader market even while its fundamentals across the board are fantastic – we’re talking net margin of 22.85%, return on equity of 46.25% and return on invested capital of 31.32% last fiscal year.

Phillips 66 is primarily an independent refiner, with assets in midstream and chemicals. 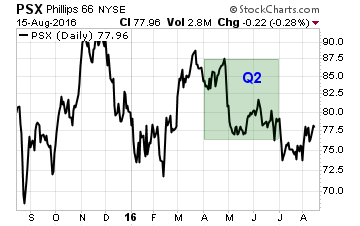 Buffett has been vocal about the buying of Phillips 66, explicitly indicating he’s behind this one.

He’s stated time and again that it’s not at all a call on oil but rather just an investment in a quality company that has a diversified business model that he likes.

It’s somewhat difficult to get a good read on where Phillips 66 is going, due to being spun-off fromConocoPhillips (COP) in 2012, and then seeing volatility pick up in a major way in the oil & gas industry in general starting in 2015.

But the company sports a great balance sheet, solid fundamentals, diversification, and a growing dividend.

It’s that last part that I’m especially excited about as a fellow shareholder – the dividend has grown by a compound annual rate of 69.2% over the last three years. Meanwhile, outside of a total collapse in earnings power, there’s still plenty of room for more. And if there’s anything I’ve learned about Buffett over the years, it’s that he loves his (growing) dividends from the companies he owns a stake in (even if he doesn’t love sending Berkshire Hathaway shareholders dividends).

This sale dropped Berkshire’s position in Charter Communications to 9,337,491 shares, a decrease of 9.6%.

Charter Communications, Inc. provides cable services throughout the US, and is the fourth largest such provider.

This sale follows numerous purchases over the last couple years, which has resulted in Berkshire amassing a fairly sizable stake in the cable services company. 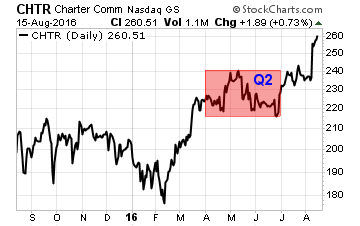 I’ve commented numerous times that I’m not sure what Berkshire really sees in the stock.

Berkshire typically sticks to business models that are easy to understand, and Charter more than qualifies on that account.

However, Berkshire also tends to invest in high-quality companies with strong fundamentals, yet Charter routinely registers losses, has volatile cash flow, keeps a ton of long-term debt on the balance sheet, and shows financial metrics that are all over the place.

However, the joke is clearly on me: Charter’s stock is up more than 27% this year. It didn’t perform notably well over the second quarter, so I’m unsure as to why Berkshire decided to prune this position other than, perhaps, portfolio management and capital allocation purposes. Either way, the stake is still quite large, with the position being worth more than $ 2.4 billion at the current stock price. 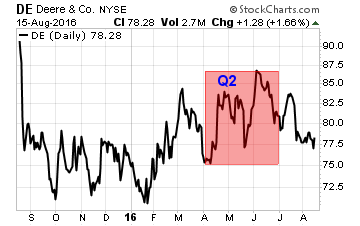 This is another sale that is a little peculiar, if only because it was just last quarter that saw Berkshire increase its stake in Deere.

So this was a bit of a reversal, and a strong one at that – this sale was about three times larger than was the purchase of Deere shares last quarter.

Berkshire still owns a sizable stake in Deere (worth more than $ 1.7 billion at today’s price), which means I don’t think we can really read into this too much. I will note, though, that Deere’s stock had a sharp run-up from about $ 77 to approximately $ 87 over a very short period of time (mid-May to early June) in Q2, so perhaps Berkshire just saw that as an opportunity to reduce some exposure. Deere’s stock has come back down about $ 10 per share since that run.

I personally think Deere is a fantastic company. Although they’re looking at some cyclical headwinds right now, the long-term picture appears bright with the way the trends in world population, demand for protein, and mechanized farming are going. The company has numerous competitive advantages and long-term tailwinds working in its favor.

That said, those cyclical issues aren’t to be taken lightly. Both revenue and net income are down substantially from FY 2013 highs. And the company hasn’t increased its dividend since early 2014. The stock is holding up relatively well, even while the bottom line has been hit pretty hard, owing to the company’s desirability as a long-term investment. However, I see nothing wrong with lightening up a bit, especially if Berkshire did it after that late-quarter pop.

Suncor Energy is an integrated energy company based out of Canada.

Whereas Phillips 66 isn’t a big direct play on oil, Suncor certainly is. It’s specifically a play on Canadian oil sands, as that’s what Suncor specializes in. I’ve never personally been very interested in Suncor because of that, since the oil sands are quite high on the cost curve when it comes to production. 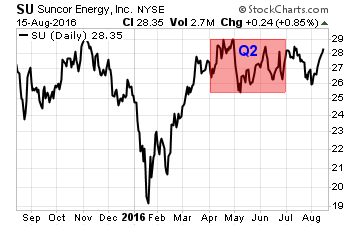 This was a pretty significant move for Berkshire, seeing the company reduce its stake in Suncor by about 1/4.

It’s interesting in that Berkshire was busy buying up shares in Suncor back when oil was priced higher, consequently leading to Suncor’s stock being intermittently priced higher, too.

I looked back on prior trades, and I found that the last time Berkshire made a move with Suncor was when they bought up a little more than 7.6 million shares over the third quarter of 2015.

Suncor’s stock was priced similarly back then, but Suncor also was looking at, potentially, a brighter future. However, the price of oil hasn’t moved up much, and the entire oil & gas industry has been in a state of turmoil.

With Suncor’s stock price not being tremendously lower than it was back when oil was priced much higher (and, thus, Suncor’s prospects brighter), it seems to make sense for Berkshire to reduce its exposure here.

This transaction reduced Berkshire’s stake in Verisign down to 12,952,745 shares, which is 0.25% less than last quarter. 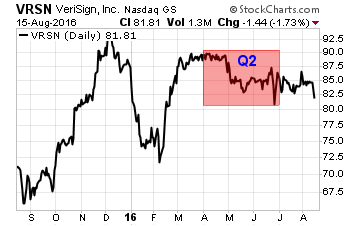 So we see another tech play here, though this was a sale (rather than a buy, like with Apple).

However, like Apple, Verisign operates a business model that isn’t very difficult to understand at its core.

They essentially provide the internet security and infrastructure necessary to get people where they’re trying to go when they’re online. Verisign operates a portfolio of top-level domains, including .com and .net. This puts the company is a strong competitive position.

Verisign’s financial performance over the last decade, however, leaves a bit to be desired. Revenue has gone nowhere, as has net income. It was only due to the company’s prolific share repurchasing activity that led to EPS growth over the last 10 years.

It’s tough to see a lot to like in this stock right now. The P/E ratio is sitting at 26, yet the company has had a difficult time producing meaningful and lasting growth over a long stretch. I think what I like best about the business is the incredible margins – Verisign’s operating margin was over 80% last fiscal year.

Either way, this was a really small move for Berkshire. That indicates to me that they’re not looking to move out of the position, which implies that they’re not concerned about the lack of secular growth for Verisign.

Wal-Mart Stores, Inc. operates retail stores in various sizes and formats across the globe. They are the largest retailer in the world. 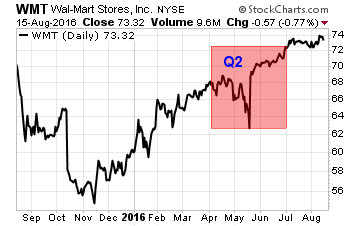 This is the second quarter in a row in which Berkshire unloaded shares in Wal-Mart, but this is by far the larger transaction of the two.

In fact, based on the size of the move, it wouldn’t surprise me at all if Berkshire is starting to sell out of the iconic retailer.

And based on the holding in question, it’s almost a sure bet that Buffett was behind this.

I’ve noted before that Wal-Mart is struggling with the large and ongoing changes in the way customers shop. E-commerce is obviously here to stay, and Wal-Mart has been slow to adapt. While their massive footprint of stores is a built-in advantage from the perspective of fulfilling orders and offering same-day shopping, they’re badly lagging major competitor Amazon.com, Inc. (AMZN) in the online game. Notably, Buffett quipped at this year’s Berkshire Hathaway shareholders’ meeting that Berkshire wouldn’t ever try to ‘out-Bezos Bezos’. This is perhaps the manifestation of that perspective.

That all said, the stock still offers a lot of what Buffett typically looks for in a long-term holding: solid fundamentals, steady long-term growth rate, appealing yield, growing dividend, a wide economic moat, and a valuation that isn’t rich. The P/E ratio is a bit over 16 right now, which isn’t totally unreasonable for this stock.

But the economic moat isn’t as wide as it used to be. And Wal-Mart’s revenue and EPS have both been moving in the wrong direction as of late. If they can’t figure out a way to be a more formidable competitor for e-commerce dollars, Wal-Mart will be in trouble. And if they can’t grow much from here, that P/E ratio will look high all of the sudden.