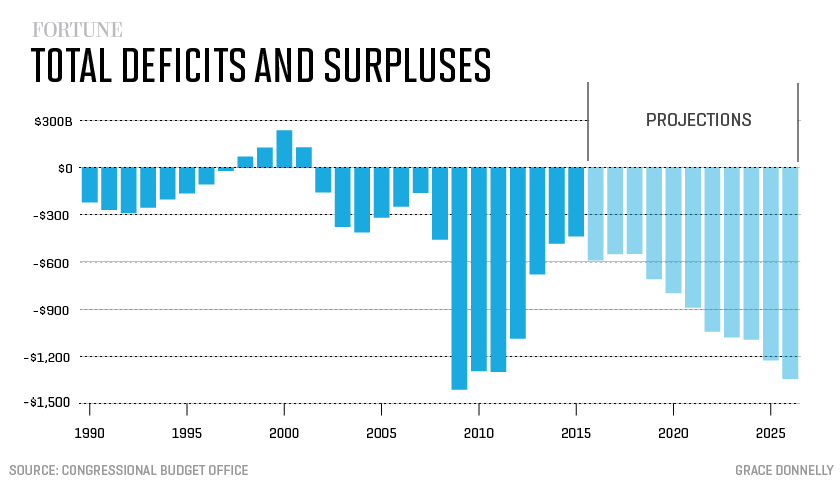 US : Clinton and Trump are both delusional about America’s finances

Donald Trump and Hillary Clinton this week unveiled dueling economic platforms that sought to outdo each other in promising big tax cuts and higher spending on everything from infrastructure to child care.

Both candidates are living in a parallel fiscal universe. The government’s non-partisan budget projections show clearly that America will have no extra money to spend, nor taxes to slash, without greatly swelling deficits that are already headed back to the $ 1 trillion mark in just a few short years. In fact, the shortfalls will explode around 18 months after the new president takes office on January 20, 2017, no matter who emerges victorious in November.

Neither candidate is addressing what will be the paramount economic issue of the next presidential term. In his big economic speech on Monday, Trump made not a single mention of America’s budget deficit, while decrying our trade deficit multiple times. Nor did Clinton’s speech on Thursday present any plan to ensure that spending doesn’t outrace revenues, a future that threatens to crush the economy under a mountain of debt.

Instead, Trump pledged a historic campaign to rebuild America’s roads, bridges and airports, and to sharply lift spending for defense and veterans’ health. At the same time, the GOP nominee is pushing deep, across-the-board tax relief, as well as a program to pay a big portion of child care costs for families. And don’t even mention taming entitlements to the tycoon; he’d sooner exchange his orange hairdo for a fright wig.Clinton also champions a major public works offensive, and advocates a long list of expensive new programs, from paying full tuition for students at public colleges to providing big subsidies for child care. Other pillars of the Clinton plan are tax cuts for the middle class, and tax relief for Americans with disabilities. And her website boasts that any attempts to reform, and hence lower the spending trajectory on Medicare or Social Security, will be fiercely opposed by a President Clinton.

Instead of making phantom promises, the candidates should be weighing the sobering projections issued by the non-partisan Congressional Budget Office (CBO). The CBO presented its most recent forecast in a March report entitled “Updated Budget Projections: 2016 to 2026.” In recent years, declining deficits have spread the illusion that America’s is returning to sound fiscal footing. Deficits dropped from a post-World War II record $ 1.4 trillion in 2009 to a low of $ 439 billion in 2015. But the “improvement” arose from a rare confluence of trends that can’t last: Entitlement spending rose only modestly because the peak wave of aging baby boomers had yet to qualify for Medicare, and the “sequester” passed by the Republican Congress in 2012 greatly restrained discretionary spending.

Now, those forces are reversing. Spending is once again growing faster than revenues, and the gap is destined to swell at an alarming rate. In the fiscal year ended September 30, federal outlays are expected to rise 5.7%, while revenues are up just 3.5%. It’s a harbinger of things to come that “mandatory spending” on entitlements are rising 9.5%, a surge that was partly offset by the modest increase in discretionary outlays. Spending on subsidies under the Affordable Care Act went from $ 15 to $ 38 billion. As a result, the deficit will jump from $ 438 billion in 2016 to a newly, and upwardly, revised $ 590 billion, an increase of 35%.

The earthquake is only starting to rumble. The CBO expects deficits to remain in the $ 600 billion range for the next two fiscal years. But starting in 2018, the gap between outlays and revenues grows rapidly. The CBO projects that revenues will remain flat at around 18% of GDP over the next decade, while spending jumps from 20.7% in 2015 to 23.1%. Assuming no change in legislation, the deficit will rise to $ 800 billion by 2020, and keep expanding from there, hitting $ 1.34 trillion by 2026. Over that period, debt to GDP would jump from 75% to 85% of GDP. The CBO further predicts the cost of paying interest on our national debt would quadruple in the same timeframe, going from 7.5% to 13% of all spending.

Unfortunately, the official projection isn’t the most likely one. It’s almost certain that tax breaks officially scheduled to sunset will remain in place, and draconian curbs on spending will be lifted. The CBO lists these items in a previous budget analysis issued in January. The official projections assume only tiny increases in defense and other discretionary spending. The CBO states that even if those outlays rise with inflation through 2020, the deficit would swell by $ 81 billion beyond its official forecast. Renewing existing tax breaks, including a big one for rapidly expensing plant and equipment, would increase the shortfall by another $ 70 billion, for a total of $ 151 billion.

So in the most likely scenario, deficits will reach well beyond the “no-change” estimate for 2020 of $ 800 billion to around $ 950 billion, dangerously close to the freakout figure of $ 1 trillion. And that will happen in the new president’s third full fiscal year, starting in October 2019. By then, the U.S. government could be spending a full 25% more than it’s receiving in taxes.

In its January report, the CBO spotlighted the dangers of excessive debt and deficits. Those twin burdens are hallmarks of an economy where “productivity and wages would be lower,” according to the CBO. That’s because all the borrowing shrinks the pool of capital available for companies to invest in plants and research centers. It could also ignite a fiscal crisis as “investors would become unwilling to finance the government’s borrowing needs” without “very high interest rates.” Government debt in the 80%-of-GDP-plus range would also rob a new administration of the flexibility to raise spending, or lower taxes, in the event of a cataclysm such as the 2008 financial crisis.

In a period where populism is resurgent, it’s instructive to remember that a maverick billionaire named Ross Perot ran for president in 1992 as an independent, on a platform of denouncing the first Bush Administration for running ruinous deficits. Perot garnered 19% of the vote, helping to elect Bill Clinton, who then worked with a Republican-controlled Congress to deliver short-lived budget surpluses in the late 1990s. Looking ahead, deficits are destined to become one of the biggest, if not the biggest, of all populist issues. You don’t need to be a wonk or an alarmist to flag the danger ahead. You just need to be honest with the voters.

Neither Hillary Clinton or Donald Trump passes that basic test.