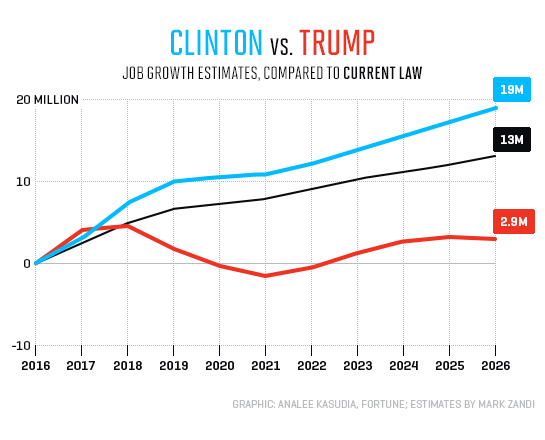 If you hear Hillary Clinton tell it, even hardcore Republicans think Donald Trump’s economic plan would be a disaster. During a speech on the economy Thursday in Michigan, Clinton cited the research of Mark Zandi, Chief Economist with Moody’s Analytics, who Clinton described as a former advisor to Senator John McCain. Clinton said that Zandi predicts Donald Trump’s economic policies would cost the economy 3.4 million jobs relative to current law. Her own plan would create 10 million jobs, again Clinton says, according to Zandi.

That’s a difference of nearly 13.4 million jobs over ten years, or roughly 111,666 jobs per month. So can we really trust these numbers?

Not entirely. The first exaggeration that Clinton makes with this claim is calling Zandi a former McCain adviser. Zandi is a registered Democrat and a Clinton donor who has written favorably of President Obama’s economic policies.

Of course, that doesn’t mean that his economic analysis can’t be trusted, but it’s not as if this he is a tried and true conservative who’s repudiation of Trump’s policies show that even rightists can’t get on board.

What’s more, that’s not really what Zandi says Trump or Clinton’s proposals would do. Zandi evaluated both of their proposals, but then when he calculated his final jobs numbers Zandi only factored in the policies that he thought would actually pass, not all of the candidates’ proposals. Stick to just what they are proposing, and only look out four years—through what would be each of their first terms—and the numbers are different. Zandi still gives Clinton the edge, but not by as much. Clinton’s proposals would add a much fewer 3.3 million jobs. Trump’s policies could eliminate 7.6 million jobs, but the spread between the two candidates falls to 10.9 million.

And this is all versus what Zandi thinks is the baseline analysis—what would happen if no policy changes were made. Forget the baseline, and Zandi predicts that there will be 144 million Americans employed at the end of Trump’s first term, which is the same as today. So Trump is not really killing any jobs. He’s just not creating any.

But there are other reasons to take Zandi’s analysis with a grain of salt, too. First, since Zandi released his analysis in June, Trump has been talking about the need for deficit-financed infrastructure spending, an idea that he looks favorably upon in his analysis of Clinton’s plan, but is not factored in his analysis of Trump’s plan.

Second, much of the negative effects of of Trump’s plan for the U.S. economy is the result of Trump’s proposed tariffs on imported goods from Mexico and China. But the effects of new tariffs are very difficult to gauge simply because there is little evidence of a modern economy erecting trade barriers of that size.

J.W. Mason, an economist at John Jay College who has written skeptically of how Zandi’s model treats new tariffs, argues that a trade war like Trump is proposing would have very little effect on the U.S. economy, though it could have a much larger impact on Mexico and China.

That’s because even if China and Mexico retaliate by raising tariffs on its own goods, trade between the U.S. and China, and the U.S. and Mexico, represents less than a quarter of overall exports and imports. Furthermore, higher U.S. tariffs may very well encourage U.S. businesses to bring some operations back to American shores, or consumers may decide to buy their wares from countries besides China and Mexico.

Zandi doesn’t think this will happen. He writes:

U.S. importers will quickly look for other sources to replace the more expensive Chinese and Mexican imports, but this will take time. Manufacturers in Southeast Asia would be most likely to step in, but it will not be easy for them to ramp up production sufficiently, at least not quickly. It is also unlikely that global manufacturers would expand their operations in the U.S., at least not for a while. Given the extreme uncertainty that would be created by the tariffs, including questions regarding how long they would remain in place, on top of the long lead times involved in developing greenfield manufacturing facilities in the U.S., manufacturers would likely be very cautious and move slowly.

So who’s version of future events is correct? It’s impossible to say, especially since there is little precedent for new tariffs on the scale that Trump is proposing. That may be reason in and of itself to not institute such policies, but this disagreement should also put doubt in the minds of those who think it’s possible to measure the impact of policies as precisely as Clinton purports to.