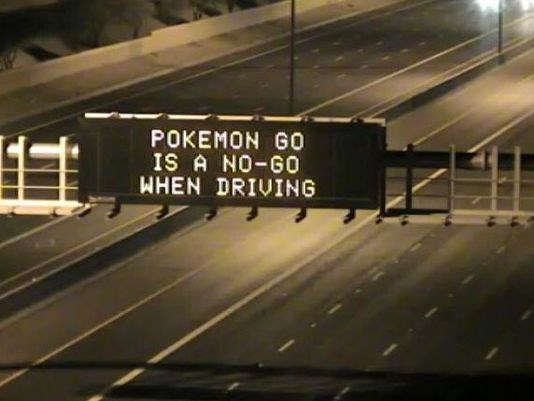 Welcome to this week’s edition of “World Out Of Whack” where every Wednesday we take time out of our day to laugh, poke fun at, and present to you absurdity in global financial markets in all it’s glorious insanity.

While we enjoy a good laugh, the truth is that the first step to protecting ourselves from losses is to protect ourselves from ignorance. Think of the “World Out Of Whack” as your double thick armour plated side impact protection system in a financial world littered with drunk drivers.

Selfishly we also know that the biggest (and often the fastest) returns come from asymmetric market moves. But, in order to identify these moves we must first identify where they live.

Occasionally we find opportunities where we can buy (or sell) assets for mere cents on the dollar – because, after all, I’m a capitalist.

It’s pure genius. Blending all humans psychological desires into a game is nothing short of genius. In fact, figuring out human nature and incorporating so many desireable elements is deserving of the $ 2million per day that the game is generating:

What Pokemon Go has done different from any previous computer game is that it’s incorporated the real world with the digital world, allowing participants to move around the physical world and to interact with others.

Pokemon Go has elements of all of these and affects human behaviour at scale. Truly impressive and somewhat frightening at the same time. Consider how many military strategists are currently watching this unfold – something to think about.

Just weeks after its release in the US, it already exceeds 21 million users, making it the most successful game in history. 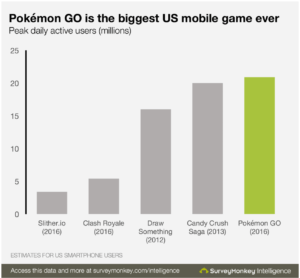 This, folks, is legal crack!

It’s as easy as selling cocaine to Wall Street bankers, except you don’t need to wear a hoodie, track pants around your bum, and a gold chain. Don’t believe me?

This is what happened when the crack, I mean Pokemon, was to be found at Millennium Park in Chicago: 5,000 addicts turned up. Grown adults, not 16-year old schoolgirls arriving to see Justin Beebop drop his pants. Adults! Amazing! 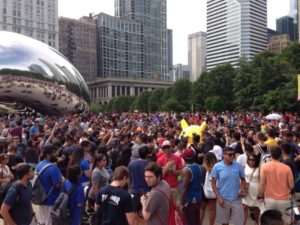 The story has since been repeated all around the world. And as Pokiezombies stumble about with eyes glued to their screens, completely immersed in the game, they lost sense of reality – what all good entertainment does to you.

A woman stumbled across a dead guy, a teen has been shot trespassing on private property while trying to catch a Pokemon, and two guys fell off a cliff searching for Pokemon. And it’s only just been launched! There have been people attempting to enter restricted military bases as presumably the desire to catch some digital nothing outweighs the risks of being shot. Good luck to them, I say.

Don’t be discouraged, though. There is a positive aspect to all of this which I’ll call “digital darwinism”. As soon as I’m finished writing this to you I’m going to secure the domain Deathbypokemon.com. I plan to flip it for a 10 fold return in a few weeks. If anyone wants it, make me an offer. It’s value can only rise.

I come to you with zero authority on the app as I don’t have it and won’t have it. Not because I’m unhip but because it’s completely pointless.

What is worth considering though is that this is our future. I don’t mean to be sensationalist but it really is. My wife asked me what it was after, hearing about it from a friend. I told her,“Babe, you know how you can control the TV with the remote? Well, Pokemon Go turns people into the TV and the smartphone controls them through the game.”

Very dangerous when you’re not in control. Give it a few years and we’ll be struggling to decipher between what is real and what is not.

Being a capitalist, what appeals to me is how to make money out of any market. So how does Pokemon Go fit into this?

For the entrepreneurial set, why not offer Pokemon hunting experiences? Package it up with lunch, cocktails, and Pokemon meet-ups. You could also post-Pokemon stress related services and JV with some psychiatrists. A one hour consultation with a shrink in Manhattan will run about $ 200. Done right, you’ll have a long list of Pokiezombies with their feet up being asked, “How does it make you feel?”. If you clip the ticket for 10%, you’ll have a team of shrinks sending you money by the hour.

Offer a “how to” guide to “Pokemon Mastery” and pay Kim Kardashian to promote it for you. Call yourself something like The Pokie Prince. And whatever you do, for goodness sake, don’t play the game because then you’ll be like everyone else: poor and wasting time hunting for imaginary items. Not unlike George Bush in Iraq.

Speaking of profiting: I took a screen grab from my trading platform where you can see Nintendo stock screaming higher, having already doubled since the launch of Pokemon Go. It is, in fact today, bigger by market cap than Sony, Hermes, Yahoo, Tesla, and Glencore to name but a few well known companies.

Now, here is a where investors may be taking a leap of faith. Nintendo doesn’t directly or fully own Pokemon Go. Instead, it owns a stake in Google’s spin-off Niantic and we don’t know what that stake is. What we do know is that it owns 32% of Pokemon Co which is the producer of Pokemon Go.

The Wall Street Journal provide us with a neat graphic on the flow: 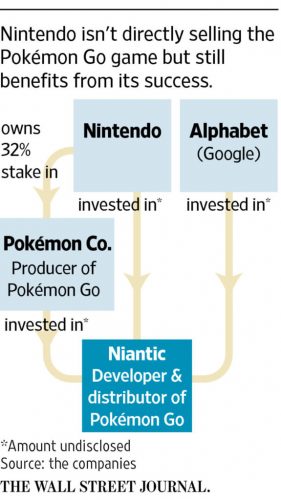 Now I’m going to suggest that maybe, just maybe the actual revenues flowing to Nintendo are nowhere near what the market in its knee jerk, do no due diligence, chase shiny objects mentality is currently predicting.

Let’s take a deep breath, step back from the noise, and consider that from the total revenues the game produces, Apple and Google automatically get a cut.

We don’t know what this looks like but is usually around 30% so let’s go with that. The balance of the money will then go to Niantic, the developer and distributor, and Pokemon Co, the producer.

As I said, we don’t know how much of Niantic Nintendo owns, but we do know they own 32.8% of Pokemon Co.

Let’s assume (or take a wild guess) and say that Nintendo owns about 30% of Niantic. Based on those numbers and the reported $ 14 odd million in revenues generated so far, this amounts to only $ 3-4 million. That folks, to you and I would be a lot of money, but to a multibillion dollar company it’s peanuts.

Now that I’ve made a bit of a bearish case for you, let me paint the picture of why you won’t catch me shorting the stock. Consider all the applications and revenue streams that this can throw off.

Would you as an owner in a business, say a hotel, pay to have your hotel located near a pokie spot, or whatever they are called? I sure would if it had the ability to send me thousands of potential customers. How much would a franchise like Starbucks pay for location based “advertising”? It’s not nothing.

What about licensing of characters? Think of all of the Star Wars characters, the figurines, the Lego, the movies (A Pokemon movie? Sure, why not?).

Let your mind wander. Let’s say you’re the owners of Fitbit. If I was James Park and Eric Friedman, I’d be striking a deal with Pokemon Co right now to incorporate the capture of characters on Fitbit. Imagine going for a run and having your Fitbit automatically pick up pocket monsters for you. How many more Fitbits would they sell?

What about the deals that can be struck with Navman, Garmin, or TomTom?

Another idea which may be worth considering and which I’ve not investigated (maybe you can provide me feedback?) is that if Pokemon Go is a data hog then data usage may well soar and the data providers could be a way to play not only Pokemon Go but the inevitable “me too” games that are headed our way.

I’ll be the first to say that I won’t be long or short this stock. I look for obvious easy asymmetric setups and this one is definitely not it.

Also, this has yet to be launched in Europe and Japan, an enormous gaming market. This could quite easily send the stock soaring far higher and I wouldn’t want to be caught short.

Certainly Nintendo trading at over 180x earnings is out of whack but there is no way to know how this plays out right now.

A better way to take advantage is to look for deals struck such as those mentioned above, then get long any of the JV partners and wait for the pop.

You see, the problem as I see it with apps and gaming companies is that like kids fighting over the last square of chocolate the market is super competitive, and first mover advantage is not what it used to be in a world where the barriers to entry are not particularly high.

In short there is bugger all moat around the business. I can bet you, for example, that right now there are thousands of developers all over the world are already decoding and disentangling the app and rebuilding versions of it.

Right now Pokemon Go is trendy, unique, and addictive. This may or may not mean anything in the long run.

Remember Candy Crush? If you’d dived into the IPO you’d have been showing off a 50% loss just six months later. Candy Crush still makes money for Activision Blizzard who bought them out (though still at a price below the IPO). Nintendo, on the other hand, is already public. Seems risky to me.

Let me know what you think by leaving a comment on the site: 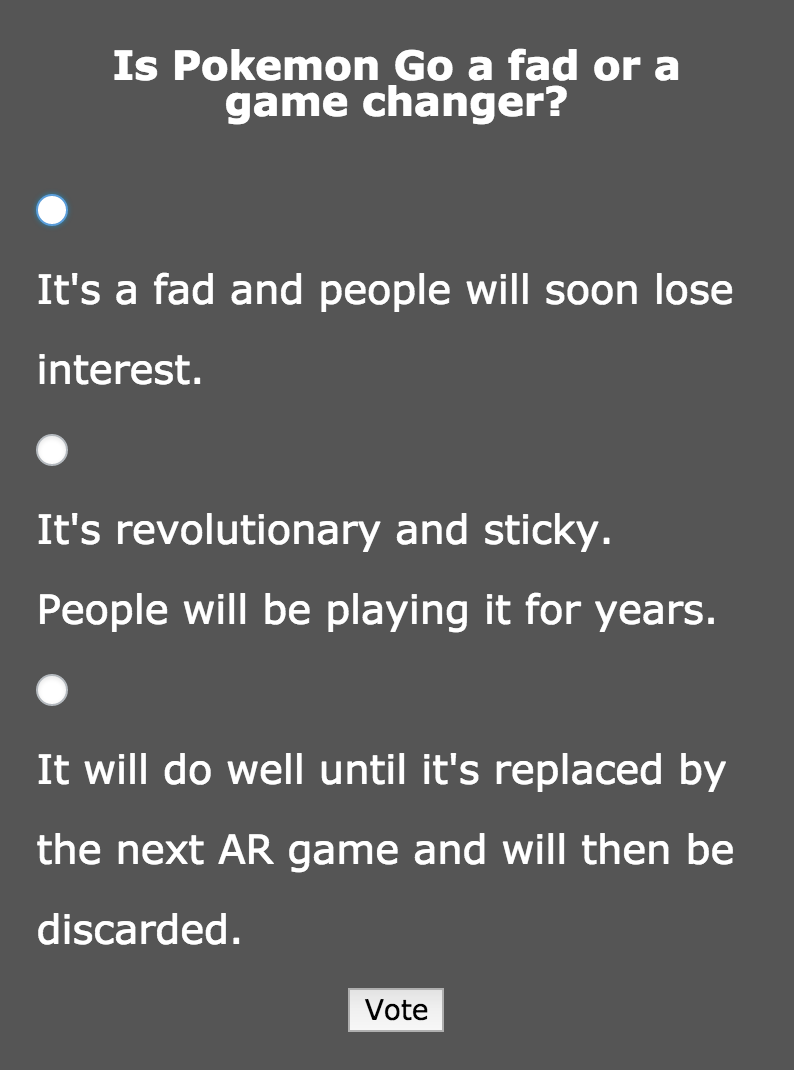