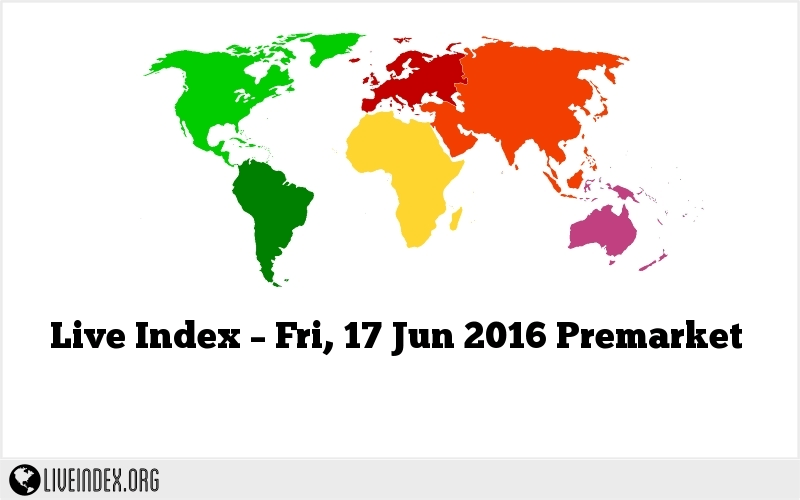 Sep E-mini S&Ps are down -0.18% and European stocks are up +1.07% as Brexit concerns temporarily receded after campaigning over whether the UK should leave the European Union was suspended for a second day today after the murder of Labor lawmaker Jo Cox, an advocate for Britain to remain in the EU. A weaker dollar has also boosted commodity prices, which has strengthened energy and raw-material producing stocks. Asian stocks settled higher: Japan +1.07%, Hong Kong +0.66%, China +0.43%, Taiwan +0.87%, Australia +0.32%, Singapore +0.43%, South Korea +0.01%, India +0.38%.

Sep T-note prices are down -11 ticks.

The BOE warns that if Britain votes next Thursday to leave the European Union, the damage could extend to global markets and the word economy. Central banks around the world are on high alert ahead of the vote with the leaders of the Fed, BOJ, BOC and SNB all citing the vote as being potentially disruptive. The BOE said a vote to leave could have “adverse spillovers to the global economy” through “financial market and confidence channels.”

Phillips 66 (PSX +0.37%) was downgraded to ‘Equal Weight’ from ‘Overweight’ at Morgan Stanley.

Envision Healthcare Holdings (EVHC -6.18%) was downgraded to ‘Market Perform’ from ‘Outperform’ at Oppenheimer.

Finisar (FNSR +0.80%) rallied over 8% in after-hours trading after it reported Q4 adjusted EPS of 29 cents, above consensus of 25 cents.

MGM Resorts International (MGM -1.47%) rose over 4% in after-hours trading after guiding annual adjusted Ebitda benefit to $ 400 million by the end of 2017 from $ 300 million previously forecast.

Lumber Liquidators (LL +0.68%) jumped over 10% in after-hours trading after agreed to not resume sales of laminate flooring previously imported from China and the U.S, Consumer Product Safety Commission said it will not order a product recall.

ServiceNow (NOW -1.06%) was rated a new ‘Market Perform’ at Oppenheimer.

September E-mini S&Ps this morning are down -3.75 points (-0.18%). Thursday’s closes: S&P 500 +0.31%, Dow Jones +0.53%, Nasdaq +0.21%. The S&P 500 on Thursday rebounded from a 3-week low and closed higher on reduced Brexit concerns after the murder of a UK lawmaker fueled speculation that UK voters will vote to remain in the EU. Stocks were also boosted by stronger-than-expected U.S. economic data after the +6.5 point increase in the Jun Philadelphia Fed business outlook survey to 4.7 (stronger than expectations of +2.8 to 1.0) and the +2 point gain in the Jun NAHB housing market index to 60 (stronger than expectations of +1 to 59 and a 5-month high). Stocks were undercut by the slide in European stocks to a 4-month low on concern about a possible UK “Leave” vote next Thursday. Stocks were also undercut by the unexpected +13,000 increase in weekly initial unemployment claims.

Sep 10-year T-note prices this morning are down -11 ticks. Thursday’s closes: TYU6 +6.50, FVU6 +3.50. Sep T-notes on Thursday rallied to a new contract high and closed higher on increased safe-haven demand from a slide in global stocks and on carryover support from rallies in 10-year German bunds and Japanese 10-year JGBs to all-time highs. T-notes were also boosted by reduced inflation expectations as the 10-year T-note breakeven inflation rate fell to a 3-1/4 month low.