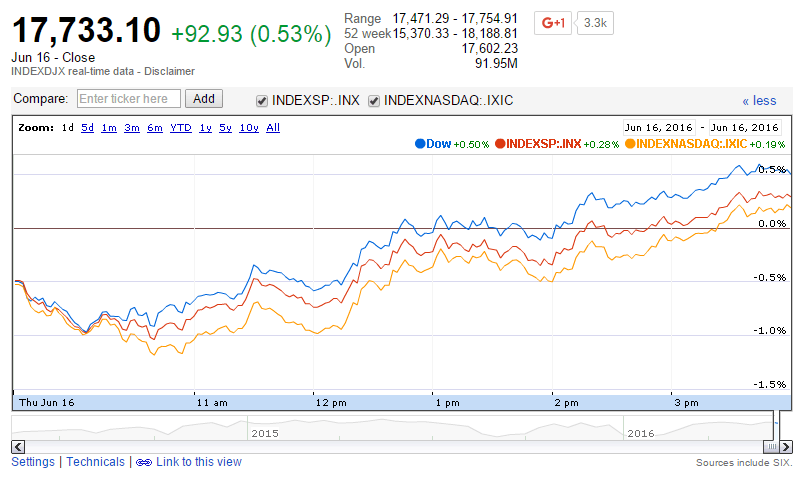 The market was packed with activity Thursday in both the U.S. and global markets. In the U.S., investors saw reports on the Consumer Price Index, Jobless Claims, Mortgage Rates, Current Account Trade, the Housing Market Index, the Fed Balance Sheet and the Money Supply. Market moving reports included jobless claims which were up 13,000 for the week after a previous decrease of 4,000. The Consumer Price Index reported annual inflation at 1.0 percent and the CPI minus food and energy was at 2.2 percent annually. The Housing Market Index gained two points from the previous month at 60 and was above consensus of 59. Mortgage rates reported by Freddie Mac were also lower for the week. In the Current Account report released on Thursday data showed the U.S. with a balance of $-124.7 billion, remaining at a deficit despite the strong U.S. dollar currency.

In global markets, U.S. stocks continued to react to a weaker outlook from the U.S. Federal Reserve after its monetary policy report on Wednesday which left rates unchanged. Other central banks reporting globally this week include Japan, Switzerland and the Bank of England.

In the Dow Jones Industrial Average, the following stocks led gains and losses: