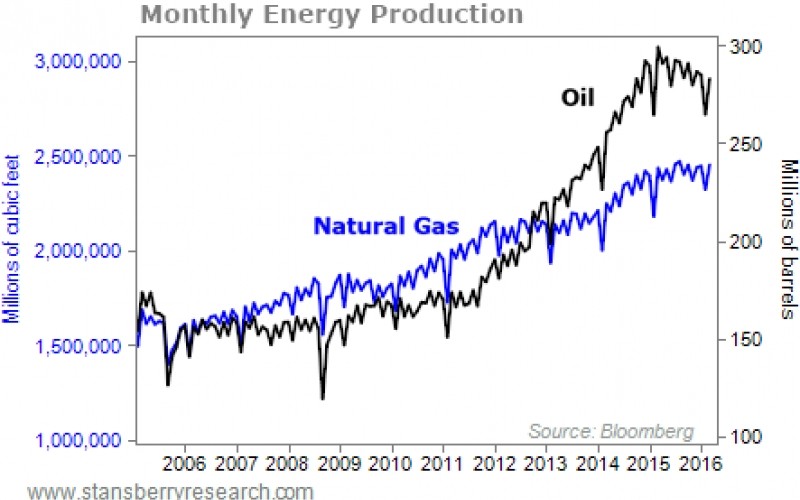 Oil production is falling… and it’s taking natural gas production with it.

Back in the early 2000s, “fracking” technology was first developed to target natural gas. The technology cracked open shale formations to liberate natural gas. After so much natural gas came online, prices plummeted in 2009… And fracking companies shifted their focus to oil.

But like all commodities, natural gas prices are cyclical. And after being ignored for years, they’re quietly ticking higher today. As I’ll explain, that gives us a great investment opportunity… 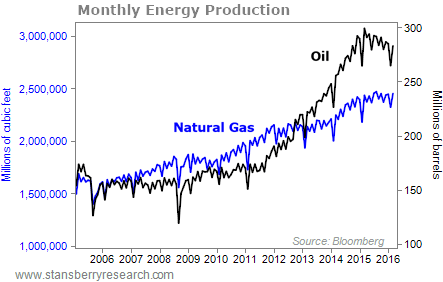 However, oil prices stayed high. Shale explorers like Chesapeake Energy (CHK) switched from gas shales like the Haynesville and Fayetteville shales to oilier ones, like the Permian Basin. But oil shale wells still produce natural gas. And the industry drilled a huge number of shale wells, so natural gas production continued to climb.

Fast-forward to today, and we have more natural gas for sale than we have ever had in the history of the U.S., almost completely due to oil production. As regular Growth Stock Wire readers know, oil prices fell, killing the industry. Nearly 70 companies have gone bankrupt since the start of 2015. Billions of investment dollars evaporated as these stocks went to zero. So companies stopped drilling wells… And U.S. production is falling.

The majority of the decline in production comes from Texas, which is the largest state producer of natural gas. Production in the Marcellus shale (which stretches through Ohio, Pennsylvania, and West Virginia) is also declining.

Unlike oil, natural gas prices are set locally. That means the supply and demand of natural gas here in the U.S. directly affects the price. Falling production has already started to boost prices. You can see the ebb and flow of both production and prices in the following chart… 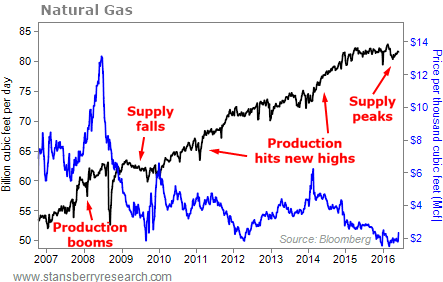 Due to the tremendous glut in natural gas supply, prices fell to just $ 1.49 per thousand cubic feet (Mcf) in March. Today, natural gas is trading around $ 2.29 per MCF – a 54% increase in just three months.

That’s a strong rally… and I expect it to continue as production continues to fall. As you would imagine, rising natural gas prices have sent shares of natural gas producers soaring.

Companies like Range Resources (RRC), San Juan Basin Royalty Trust (SJT), Cabot Oil & Gas (COG), and EQT (EQT) are up 119%, 77%, 63%, and 51%, respectively, from their January lows. It looks like the bull market we’re starting to see in oil is extending to natural gas companies, too.

It’s time to jump into this rally if you haven’t already.