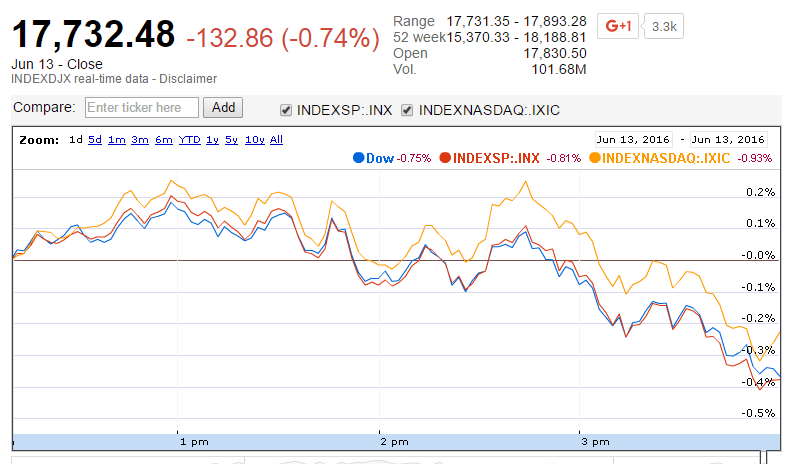 Volatility in market trading was high on Monday as the Federal Reserve’s June rate decision is only a few days away. The Federal Reserve’s Federal Open Market Committee will meet on Tuesday and Wednesday, June 14 and 15 to discuss the Fed’s monetary policy. The VIX Volatility Index reached a new high prior to the mid-week meeting. The VIX Volatility Index reached 20.92 for a gain of 3.89 points or 22.84 percent.

No economic reports were scheduled for Monday and the economic focus continues to remain on the FOMC’s Wednesday press conference which will include the Fed’s decision on a rate increase as well as the projections of the committee members.

Microsoft and LinkedIn were both active Monday as the two companies announced a merger. Microsoft will be buying LinkedIn for $196 a share or approximately $26.2 billion. Microsoft will pay cash for the deal which values LinkedIn at a 50 percent premium to its Friday closing price.

Apple also traded actively as it began its Worldwide Developers Conference in San Francisco. While the WWDC appears to be a success, the stock continues to fall as demand decreases in the technology sector. For the day the stock was down 1.51 percent to $97.34.

In the Dow Jones Industrial Average, stocks leading gains and losses for the day included: