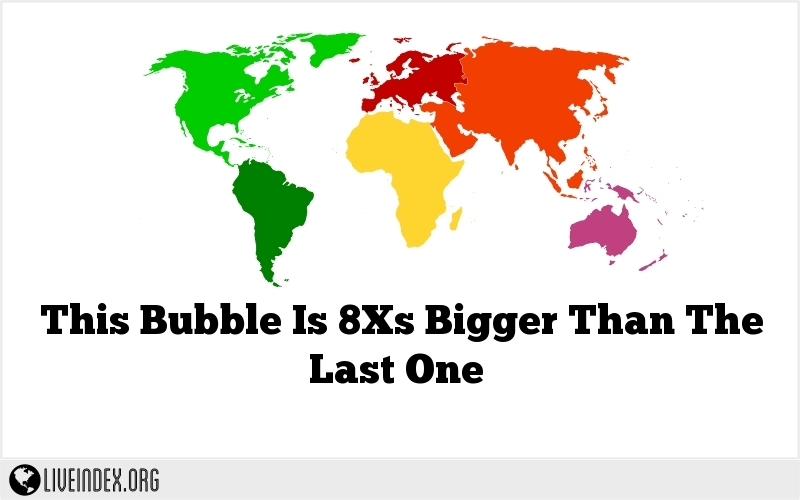 This Bubble Is 8Xs Bigger Than The Last One

On July 1, 2005, the Chairman of then President George W. Bush’s Council of Economic Advisors told a reporter from CNBC that,

“We’ve never had a decline in house prices on a nationwide basis. So, what I think is more likely is that house prices will slow, maybe stabilize, might slow consumption spending a bit. I don’t think it’s gonna drive the economy too far from its full employment path, though.”

His name was Ben Bernanke. And within a year he would become Chairman of the Federal Reserve.

Of course, we now know that he was dead wrong.

The housing market crashed and dragged the US economy with it. And Bernanke spent his entire tenure as Fed chairman dealing with the consequences.

One of the chief culprits of this debacle was the collapse of the sub-prime bubble.

Banks had spent years making sweetheart home loans to just about anyone who wanted to borrow, including high risk ‘sub-prime’ borrowers who were often insolvent and had little prospect of honoring the terms of the loan.

When the bubble got into full swing, lending practices were so out of control that banks routinely offered no-money-down mortgages to subprime borrowers.

In other words, they would loan the entire purchase price of a home plus closing costs, and then kick in a little bit extra for the borrower to put in his/her pocket.

So basically these subprime home buyers were getting paid to borrow money.

Of course, we know how that all turned out. By 2008 the entire system crashed, and the post-game analysis had some pretty obvious conclusions:

Bad things tend to happen when you pay people to borrow money, especially when they’re not particularly creditworthy.

Thank goodness no one in finance engages in such risky behavior anymore!

Today, subprime is back.

There’s been a lot of talk lately about a growing bubble in the subprime auto loan market, and even student loans.

But the biggest subprime bubble of all is the negative interest loans being made to sovereign governments.

All over the world now there are governments that are issuing sovereign bonds with negative yields… and many of these governments are totally bankrupt.

Japan, with its debt level at more than 220% of GDP, is the latest entrant into the world of negative interest bonds.

Japan’s debt is so high, in fact, that it takes 41% of government tax revenue to service.

Even in Italy, one of Europe’s most notoriously and hopelessly bankrupt countries, the government bonds have negative yields.

‘Negative yield’ means that an investor who loans money to government will get back less money than s/he invested once the bond matures.

In other words, the government is getting paid to borrow money.

So it’s not much different than when banks paid subprime homeowners to borrow money ten years ago based on a misguided premise that home prices always go up.

Now they’re just paying subprime governments to borrow based on a misguided premise that governments will ALWAYS pay. (Just like Greece!)

The key difference is size. At the peak of the housing bubble ten years ago, there was about $ 1.3 trillion worth of subprime mortgages in the financial system.

That $ 1.3 trillion bubble was enough to bring down several major banks and cause cascading damage across the global financial system.

Today’s bubble is EIGHT TIMES the size of the last one, with more than $ 10.4 trillion worth of government bonds that yield negative interest.

And what’s even more concerning is how quickly it’s growing.

In January 2016, the total amount of government bonds in the world with negative interest totaled $ 5.5 trillion.

So this gigantic sovereign bond bubble where governments are being paid to borrow money has practically doubled just in the last several months.

This isn’t a cause for panic or to assume that the financial system is going to crash tomorrow.

But it’s clearly a disturbing trend… the proverbial powder keg in search of a match.

And when future pundits write the history of the financial crisis to come, whether it happens today, tomorrow, or years from now, you can bet they’ll wonder how the entire system failed once again to see something so dangerous… and so obvious.