In The Week Ahead: Fear Could Spark A Deeper Decline

The market is at an important near-term decision point. Stocks must quickly and aggressively resume their advance or risk slipping into a deeper decline.

The two hardest hit sectors last week were energy (-3.3%) and financial services (-2.5%), while real estate was the best-performing sector (+3.7%). The movement in the latter two was driven by falling long-term interest rates.

Despite weakness in energy, the table below shows that the biggest positive percentage change in sector bet-related assets over the past one-month and three-month periods were into this sector. As long as these positive asset flows continue, energy stocks still have the potential to move significantly higher in the weeks and months ahead.

Stocks At Near-Term Decision Point
In last week’s Market Outlook, I pointed out that influential Apple (Nasdaq: AAPL) was testing major underlying support at $ 92. I warned a breakdown below this level would clear the way for more selling in the tech bellwether, as well as in the positively correlated Nasdaq 100 and S&P 500. AAPL closed Friday just above this support level at $ 92.72. 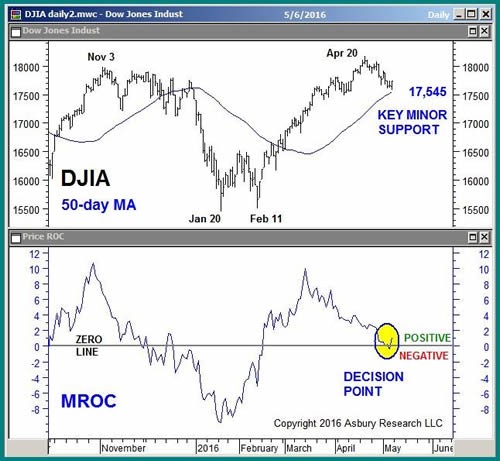 At the bottom of the chart, we see the one-month rate of change finished the week just barely above its zero line.

Like Apple, the Dow is at an important near-term decision point. It too must turn higher or risk a deeper decline.

Investor Fear May Hold The Key
What happens at these important levels may be determined by investor fear, which can be measured by the Volatility S&P 500 (VIX). The VIX rose above its 50-day moving average at 15.33 last week, but failed to hold above it, closing at 14.72. 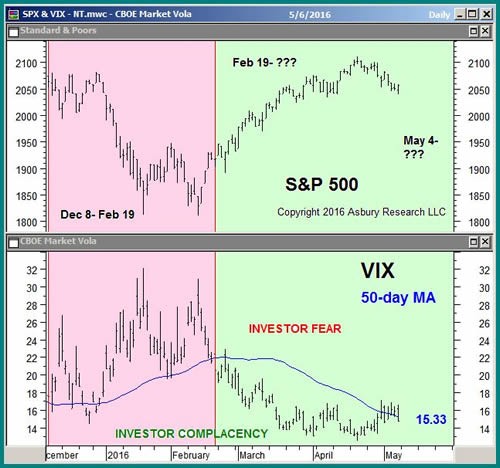 The last time the VIX made a sustained move above its 50-day moving average coincided with a decline in the S&P 500. So, a sustained move above 15.33 in the VIX would have the same significance as a break of support in the Dow or AAPL; that is, it would warn of more vulnerability in the market. However, as long as the VIX remains below its 50-day moving average, support is likely to hold and potentially mark the start of a new move higher.

Interest Rates Also At A Decision Point
In the April 11 Market Outlook, I highlighted the 1.71% to 1.63% area in the yield of the benchmark 10-year Treasury note as a major inflection point. I said this is where the next move — either up to 1.85% or down to 1.43% — was likely to begin.

Support held and yields rebounded to close as high as 1.94% on April 26 before declining again to finish last week at 1.79%. The recent sideways movement in yields has traced out a triangular pattern, indicating temporary investor indecision, which is likely to become the springboard for the next significant trend. 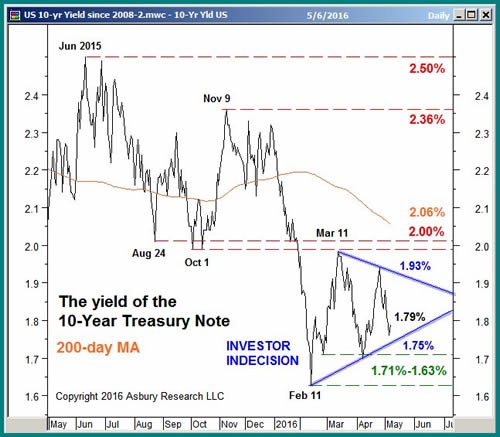 Investors Piling Back Into Gold
In early April, I pointed out that contracting daily total net assets in the SPDR Gold Shares (NYSE: GLD) warned of upcoming weakness. Following that report, GLD traded sideways for the next several weeks.

But on April 29, total net assets climbed back above their 21-day moving average — indicating the trend of monthly expansion that fueled the December-to-March advance had resumed — and remained above it through the end of last week. 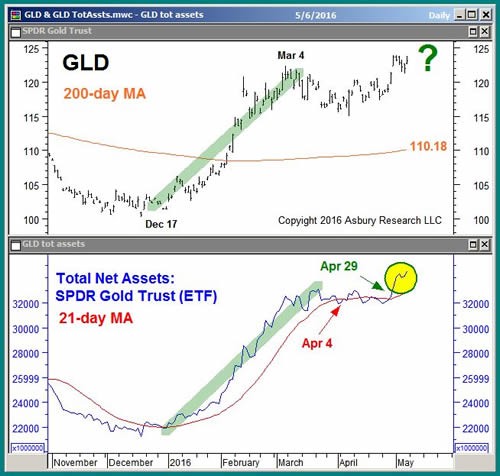 Although I am reluctant to suggest a new buying opportunity in an asset that shot up roughly 20% in three months with just a shallow correction, as long as investor assets continue to expand, the rally in gold is likely to continue.

Putting It All Together
The stock market is at an important near-term decision point that can be seen in a number of indices and key individual stocks, including the Dow and Apple. The advance must resume in the next week or so or we are at risk of a potentially more damaging correction. Traders should watch the VIX for an indication of how the market will resolve this important inflection point.

Meanwhile, investors are moving assets into gold. This could be an indirect indication of apprehension leading them to buy some insurance to help offset the threat of more weakness in stocks in the second quarter.

This article originally appeared on Profitable Trading: Fear Could Spark a Deeper Decline.