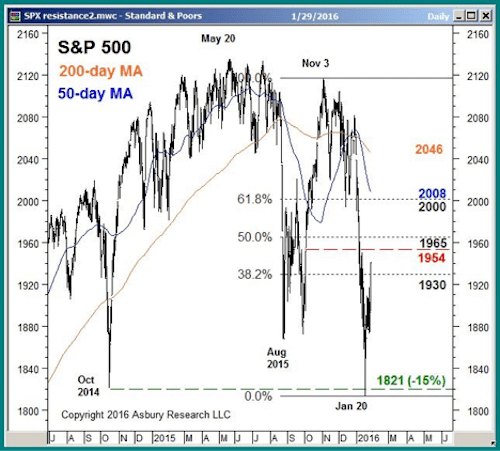 How to Tell if the Market’s Rebound is Sustainable

The major U.S. indices closed higher last week, adding to the previous week’s gains. The rebound was led by the blue-chip Dow Jones Industrial Average, which climbed 2.3%. The tech-heavy Nasdaq 100 — which typically leads the market both higher and lower — brought up the rear with gains of just 0.5%.

From a sector standpoint, last week’s advance was led by downtrodden energy. The sector is closely tied to crude oil prices and gained 4.4% on the hopes that oil supply is set to decrease. The next strongest sectors were both defensive, though, with utilities and consumer staples gaining 3.7% and 3% respectively.

It’s too early to fully assess the sustainability of this rally, but this lack of leadership doesn’t instill much confidence that it’s more than a mere correction in an uncompleted market decline. More clues to the sustainability of the current rebound can be found by watching which areas of the market lead and lag in weeks ahead.

Important Resistance is on the Horizon

The bellwether S&P 500 has aggressively rebounded from its test of underlying support at 1,821 — a level I first discussed in the Jan. 19 Market Outlook. The chart below shows that the index enjoyed a big, one-day bullish reversal on Jan. 20 and has climbed a total of 7.1% since that session’s low.

The chart also shows that the next overhead resistance level is situated at 1,954 to 1,965, which represents the Oct. 5 low and the 50% retracement of the S&P 500’s November-to-January decline.

How the market responds to that resistance this week will be a good indication of whether a test of the next level at 2,000 to 2,008 is in store, or if we should instead expect a reversal lower and retest of 1,821 support.

In terms of trend, however, a sustained rise above the 200-day moving average at 2,046 will be necessary to confirm that the S&P 500’s current major downtrend is over, and the previous uptrend that began in January 2012 has resumed.

In last week’s Market Outlook, I pointed out that the Volatility S&P 500 (VIX) was key to determining whether the rebound from support at 1,821 was corrective (a countertrend rally in a downtrend) or directional (the beginning of a new bullish trend). 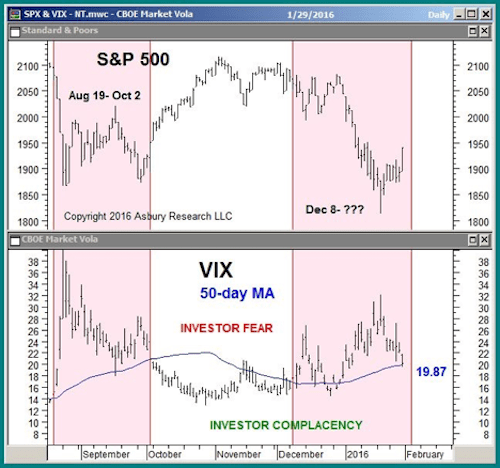 Over the past several years, moves in the VIX above its 50-day moving average have coincided with declines in the S&P 500, including the index’s two most recent declines. Thus, how the VIX reacts to 19.87 this week will also offer a good early indication of whether this recent stock market rally has legs.

Interest Rates are Being Driven Lower

In the Jan. 19 Market Outlook, I pointed out that the benchmark U.S. 10-year Treasury note’s early January decline had pushed it below its January 2015 uptrend line, clearing the way for a deeper move to 2.00%. The next chart shows that my 2.00% target was met last week, with yields closing at 1.94% Friday. 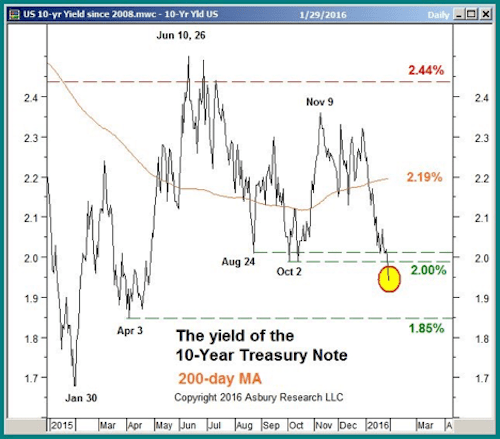 The recent decline in long-term interest rates was initially driven by a flight to relative safety. Investors were moving out of collapsing U.S. stocks and into long-dated Treasuries, driving the latter’s yield down.

That trend received an additional boost on Friday as the Bank of Japan announced an unexpected cut of its short-term interest rate to negative 0.1%, adding it’s willing to push rates even lower if necessary.

Moving back to the United States, last week’s decline below 2.00% clears the way for a potential move to the next key level at 1.85%, which represents the April 2015 closing low. Whether yields get there depends on if the current rally from SPX 1,821 continues.

Simply stated, the longer the stock market rally lasts, the more investor dollars will moves out of Treasuries and back into equities, driving bond yields back up.

The red circle in the upper panel of the next chart shows that last week’s rally effectively resulted in a test of GLD’s 200-day moving average at $ 108.58 — a widely watched major trend proxy that has defined GLD’s current downtrend since February 2013. 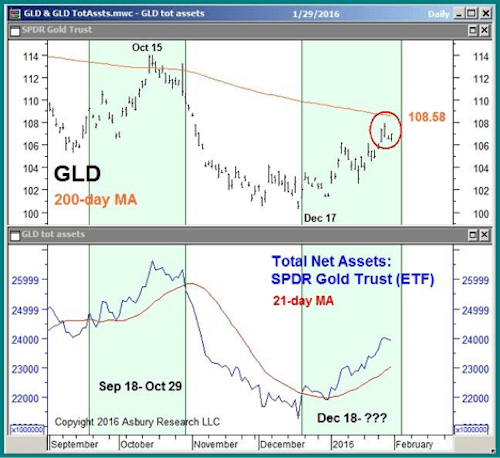 This represents a major decision point for GLD from which its larger downtrend should resume if still valid. The key to that decision is investor asset flows.

Expanding investor assets fueled the current rally since Dec. 18, as seen on the green highlights in the chart. They also fueled the September-to-October advance before that. As long as this monthly trend of asset expansion continues, so should the current rise in GLD.

That being said, Market Outlook readers may consider tightening protective stops on long positions to lock in a profit in the event that these assets start to contract and the prevailing 2013 downtrend in GLD resumes.

Although the benchmark S&P 500 has already risen 6.5% from underlying support at 1,821, it will take a decline below 19.87 in the VIX to help confirm this is the beginning of a sustainable move higher rather than just a countertrend rally in an uncompleted decline.

If this rally does continue deeper into the first quarter, it should stem the recent decline in long-term U.S. interest rates, as investor assets will move out of bonds and back into the stock market, pushing yields higher.

Editor’s Note: If the stock market’s rally proves to be sustainable, make sure you’re ready. Now is a great time to explore a quantitative system that removes the emotion from buy and sell decisions and pegs stocks that are about to soar. This indicator spotted many of the best-performing picks of 2015, tagging leaders that delivered gains of 55%, 60% and 88%. Click here to learn more.