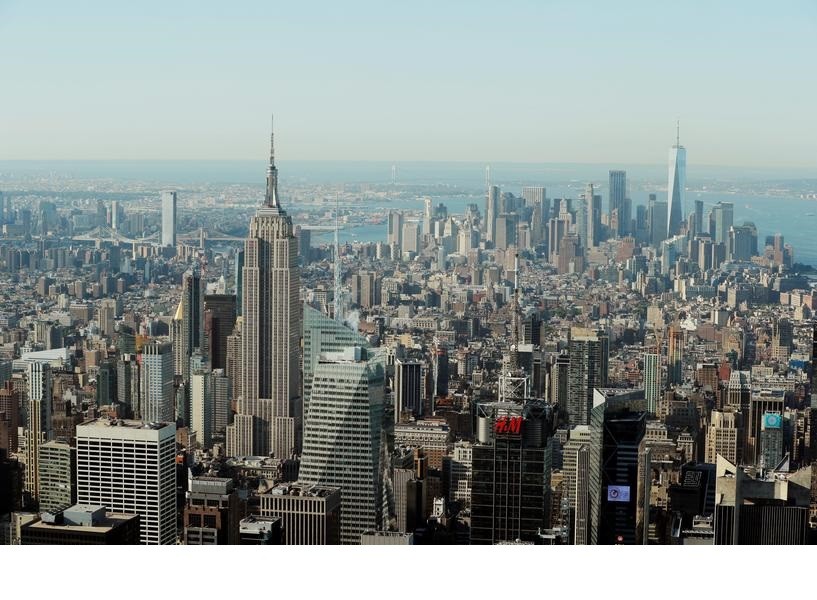 The U.S. economy is at an “inflection point” with expectations that growth and hiring will pick up speed in the months ahead, but also risks if a hasty reopening leads to a continued increase in coronavirus cases, Federal Reserve Chair Jerome Powell said.

In an interview on the CBS news magazine “60 Minutes” that aired on Sunday night, Powell echoed both his recent optimism about the economy and a now-familiar warning that the COVID-19 pandemic had not yet been fully defeated.

“There really are risks out there. And the principal one just is that we will reopen too quickly, people will too quickly return to their old practices, and we’ll see another spike in cases,” Powell said in the interview, recorded on Wednesday.

The impact of vaccinations should mean any coming spike in cases is not as severe and does not have the same disastrous effects on public health and the economy as prior surges. But Powell said the economic recovery will still “move ahead more quickly to the extent we keep the spread of COVID under control.”

“It’s going to be smart if people can continue to socially distance and wear masks.”

Chairs of the U.S. Federal Reserve appear only rarely on widely-aired broadcast shows like “60 Minutes” though Powell has used that type of platform several times during the pandemic to explain Fed policy and, in the beginning, to try to calm fears about a full-on economic collapse.

A year later, data on the economy has been positive by and large, with a better-than-expected 916,000 jobs created in March and some Fed officials suggesting a run of a million new jobs a month is possible later this year.

Powell said the base case forecast is for “very strong” job growth in the months ahead, and that it is “in the range of possibility” for the U.S. to see “quick progress to maximum employment.”

Those hardest hit by the pandemic, including low wage workers in the service sector, could see their jobs return with relative haste in coming months as more and more activities are considered safe to resume, Powell said.
The Empire State Building and One World Trade Center rise above Manhattan as seen from an apartment in the Central Park Tower building as the building celebrates its topping out in New York, U.S. September 17, 2019. REUTERS/Lucas Jackson

But Powell reiterated that the Fed is not about to change its current policy of near zero interest rates and bond purchases of $120 billion per month.

Officials intend to keep support for the economy in place until the recovery is largely complete, and “stick with those people and support them as they try to get back to where they were in life, which was working.”

While pockets of the United States are seeing an upswing in COVID-19 cases – in Michigan in particular – infection rates in large parts of the country are at multi-month lows, and the vaccine rollout continues apace with a one-day record of 4.6 million doses given on Saturday, according to a Reuters tracker.

That has allowed wide swaths of the economy to more fully reopen. Activity in the hardest-hit leisure and entertainment sectors has picked up significantly in recent weeks as consumers regain the confidence to resume dining out and hopping on airplanes.

Still, even with March’s big increase in employment, the labor market remains 8.4 million jobs short of where it was in February 2020, just before the pandemic triggered an historic downturn, and even further short of where the level of employment would be now had the pandemic never occurred.

The bounce back has also been uneven. The unemployment rate is 6% nationally, but is 9.6% for Blacks and 7.9% for Hispanics versus 5.4% for whites, and 8.2% for those without a high school diploma versus 3.7% for those with college degrees.

A new Fed framework puts more weight on job creation, and builds in allowances for inflation to run above the central bank’s 2% target for a time without the Fed intervening to rein it in.

Powell drew a distinction between the Fed’s intent to let inflation run “moderately” above its 2% target, and anything faster than that.

“We don’t want inflation to go up materially above 2% and go back to…the bad, old inflation days,” of the 1970s, Powell said.

Powell said as recently as Thursday that a coming upswing in inflation readings is likely to be transitory and won’t cause the Fed to change it plans for monetary policy.