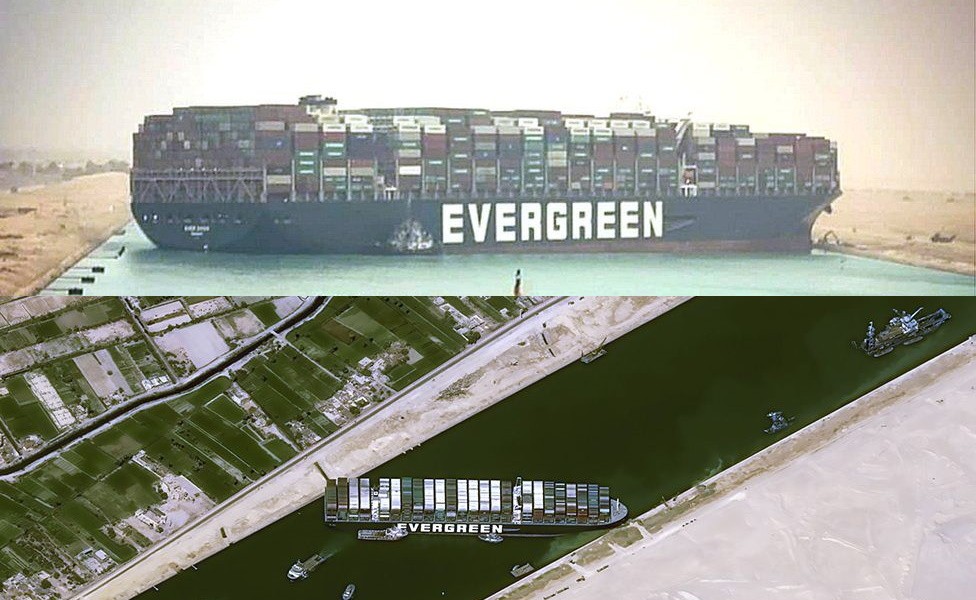 The Ever Given, a 220,000-ton mega ship nearly a quarter-mile long with a 20,000 container capacity, ran aground after being blown by strong winds while entering Egypt’s Suez Canal from the Red Sea. It’s completely blocked the passageway that is home to as much as 12% of the world’s seaborne trade and through which 50 container ships normally transit per day.

Tugboats and dredgers are currently working to dislodge the ship, which has been stuck since Tuesday evening. But the operation could take weeks, one of the executives involved has warned.

“While we believe and hope the situation will get resolved shortly, there are some risks of the ship breaking,” J.P. Morgan strategist Marko Kolanovic wrote in a note Thursday. “In this scenario, the canal would be blocked for an extended period of time, which could result in significant disruptions to global trade, skyrocketing shipping rates, further increase of energy commodities, and an uptick in global inflation.”

The crisis is another blow to the global supply chain after a brutal year ridden with delays, shortages and price squeezes on the back of the coronavirus pandemic.   The shipping delays could impact everything from the clothes and shoes you ordered online to gym equipment, electronics, food, and energy supplies — meaning gas prices could get higher, too. “Suez Canal container blockage to further rattle global supply chains, to drive pricing higher given pent-up demand,” analysts at JPMorgan said in a research note Thursday.

The man-made Suez, at 120 miles long, is a key transit point connecting East to West. And the 20,000 ships that pass through it yearly transport everything from oil and gas to machine parts and consumer goods. 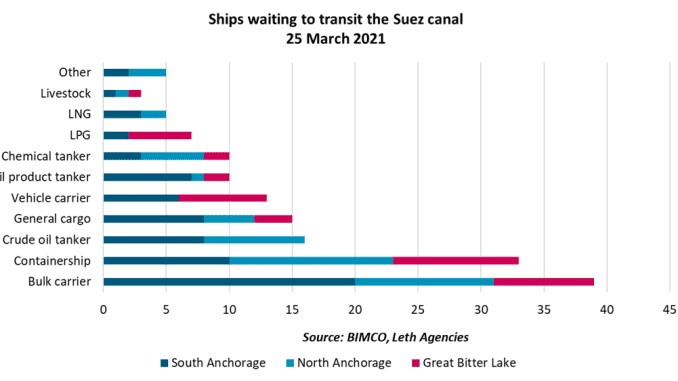 While it’s still early to say what the full impact of the tanker crisis will be, the bank expects that in the near term, “the blockage is likely to add to industry supply strains, which are already hampered by ongoing supply chain bottlenecks″ in the form of port congestion and shortages of both vessels and containers due to Covid-19.

Ships are going to have to re-route to entirely different routes, “will result in longer voyage times and causing further delays,” JPMorgan wrote.

And those delays could be more than 15 days for many ships, whose alternative is sailing around the Cape of Good Hope at the southern tip of Africa, which analysts say would increase shipping times by up to 30%.   “The immediate impact of delays in the canal will centre on European – Asian trade, adding delays to already disrupted supply chains affecting oil and refined products’ supplies,” ING senior economist Joanna Konings wrote in a client note Wednesday.

The Ever Given’s misfortune has already impacted oil prices.  News of the Suez blockage drew in buyers, and along with other economic data contributed to international benchmark Brent crude’s one-month futures contract gaining “its biggest one-day gain in nearly a year to close at $64.41” on Wednesday, according to Arctic Securities, though it lost some of those gains by Thursday.

In the meantime, between 5% to 10% of all seaborne oil is transported through the Suez, meaning that for each day that the ship remains stuck, it delays the shipment of another 3 to 5 million barrels of oil per day. Several tankers carrying jet fuel and gasoil are also held up on the Persian Gulf-Europe route, as well as empty tankers crossing to pick up North Sea oil, S&P Platts reported Thursday. The canal is also a transit point for around 8% of global liquefied natural gas (LNG), and a prolonged disruption could disrupt flows to primarily the European market.

Any price effect will likely be brief, however, says Peter Sutherland, president of Houston-based energy investment firm Henrietta Resources LLC.  “It won’t have a lasting impact on prices, but it will help lend support in the run-up to the OPEC+ meeting,” Sutherland told CNBC.  “The risk premium in oil markets will likely be short-lived, but the canal back-up still managed to shift the market narrative.”

The canal blockage is certainly not bad news for everyone — spot freight rates are set to jump even higher on pent-up demand, making money for the operators, market watchers say.

“A more prolonged closure of the Suez Canal would see container shipping as the biggest beneficiary, while tanker, dry bulk and air cargo might also see some higher rates,” wrote JPMorgan, describing the tightening of shipping rates “as a upside risk.” Who is set to benefit most? J.P. Morgan highlights Asian liners, saying that despite higher bunker costs due to longer re-routed journeys and increased congestion, they expect higher spot freight rates. “This instead of hurting profitability is expected to be positive for bottom-line for Asia liners, in our view,” the bank wrote.

Bank of America’s analysts agree. “A Suez closure of a few weeks would be very positive for spot freight rates — by effectively removing supply by adding 20-30% to sailing distance via Cape of Good Hope,” it wrote in its note Thursday.

The uncertainty over the blockage’s duration “creates a window of opportunity for state and non-state actors seeking to maximize the impact of attacks against tankers and energy infrastructure in the Persian Gulf and Red Sea,” he warned.

Most analysts expect the situation to be cleared within the week. But “the disruption could be prolonged if there are complications or hull damage,” Bank of America wrote Thursday. When the traffic eventually gets cleared, ships will be arriving at their ports behind schedule, creating yet more congestion.

Still, the bank writes, “a blockage of a few days would be broadly manageable to the container shipping industry — perhaps involving additional fuel cost as shipping companies speed up their services to make up lost time.”  The whole fiasco underscores just how fragile the trading network that the world relies on really is, says Sutherland.  “Paired with the recent attacks on Saudi installations, it’s a reminder of the many vulnerabilities in the global oil and gas supply chain.