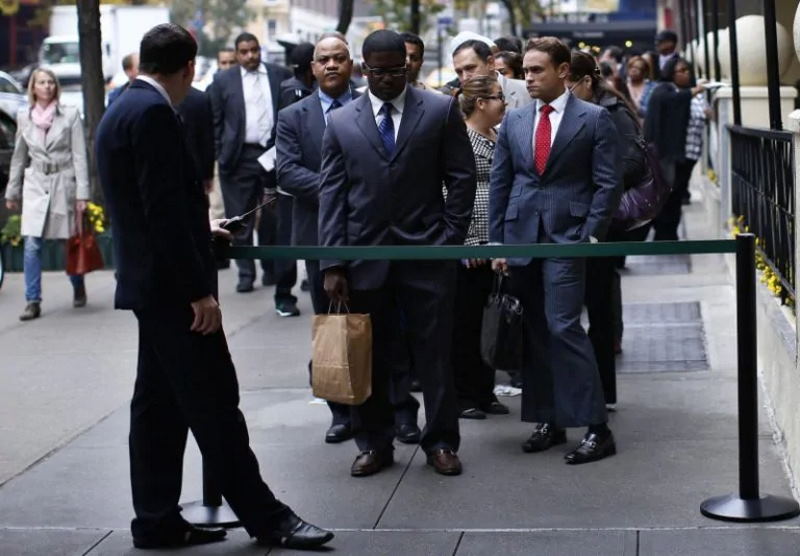 U.S. job growth likely slowed further in August as financial assistance from the government ran out, threatening the economy’s recovery from the COVID-19 recession.

The Labor Department’s closely watched employment report on Friday would come as companies from transportation to manufacturing industries announce layoffs or furloughs. It could add pressure on the White House and Congress to restart stalled negotiations for another fiscal package, and will likely become political ammunition for both Democrats and Republicans with just two months to go until the presidential election.

Programs to help businesses pay wages have either lapsed or are on the verge of ending. A $600 weekly unemployment supplement expired in July. Economists credited government largesse for the sharp rebound in economic activity after it nearly ground to a halt following the shuttering of businesses in mid-March to control the spread of the coronavirus.

“The pandemic has really torn our economic and social fabric,” said Sung Won Sohn, a finance and economics professor at Loyola Marymount University in Los Angeles. “The ending of the fiscal stimulus has not helped the situation.”

According to a Reuters survey of economists nonfarm payrolls likely rose by 1.4 million jobs last month, with some of the anticipated gains coming from hiring for the 2020 Census. Employment increased 1.763 million in July and its growth peaked at 4.791 million in June.

Friday’s report is one of just two monthly labor market scorecards left on the calendar before the Nov. 3 presidential election.

President Donald Trump, who is trailing in polls behind former Vice President Joe Biden, the Democratic Party nominee, is likely to tout the continued job gains as a sign that the economy is improving after suffering its biggest shock in at least 73 years in the second quarter.

But employment would still be about 11.5 million below its pre-pandemic level. Most of the job gains have been workers being recalled from furloughs or temporary layoffs. Though new COVID-19 infections have subsided after a broad resurgence through the summer, many hot spots remain.

A report this week from the Federal Reserve based on information collected from the U.S. central bank’s contacts on or before Aug. 24 showed an increase in employment. The Fed, however, noted that “some districts also reported slowing job growth and increased hiring volatility, particularly in service industries, with rising instances of furloughed workers being laid off permanently as demand remained soft.”

“Restaurants and other businesses in the services industry are not going to continue calling workers back when demand is not there,” said Ryan Sweet, a senior economist at Moody’s Analytics in Westchester, Pennsylvania. “We need the stimulus like weeks ago.”

The unemployment rate is forecast to have dropped to 9.8% in August from 10.2% in July, according to the Reuters survey. That would leave it just under the 10% peak shortly after the end of the 2007-09 Great Recession.

But the measurement of the jobless rate has been biased downward by people misclassifying themselves as being “employed but absent from work.” At least 29.2 million were receiving unemployment benefits in mid-August.

Lydia Boussour, a senior economist with Oxford Economics in New York, estimated that payroll gains in line with expectations would leave one out of two laid-off workers still unemployed, with an increased risk of a prolonged high unemployment spell.

“The fact that the employment is settling into a trend of slow, grinding improvement is a worrisome sign for the broader recovery,” said Boussour. “The combination of slow employment progress and poor health conditions along with the absence of fiscal aid risk jeopardizing the consumer spending rebound in the coming months.”

Slowing job growth will likely have a limited impact on gross domestic product in the third quarter, which economists estimate could rebound at an annualized rate of as high as 30% after sinking at a historic 31.7% pace in the April-June quarter. But it will hurt fourth quarter GDP, with consumer spending taking a hit.

Though wages surged at the depth of the pandemic, that was because the job losses were concentrated in the low wage services industries like restaurants and bars

Average hourly earnings are forecast unchanged in August after rising 0.2% in July. That would lower the annual increase in wage to 4.5% from 4.8% in July.

The service sector is likely to account for most the anticipated gains in August. Manufacturing is expected to have added another 50,000 jobs. Government payrolls were likely boosted by the hiring of at least 250,000 workers for the population count, though some it could be offset a decline in education employment at states and local governments.

“We look for education-related employment to be particularly weak as the back-to-school season will be abnormal in many areas,” said Daniel Silver, economist at JPMorgan in New York.