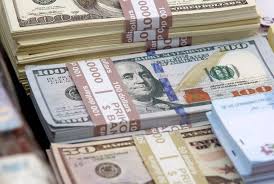 Investors rushing back to risk assets this month just got a reminder of the kind of simmering geopolitical threats out there. That could be good news for the dollar.

The drone strike on one of the world’s biggest oil facilities over the weekend raises the specter of escalating tensions across the Middle East — exactly the kind of scenario that typically fuels demand for assets denominated in the world’s reserve currency.

“Any retaliatory measures by Saudi Arabia would inevitably lead to an increased geopolitical risk scenario, i.e. the demand for safe-haven currencies can be expected to remain buoyant,” wrote Marc-André Fongern, strategist at MAF Global Forex. “From a fundamental perspective, there is still hardly any alternative to the dollar.”

Throw in still-festering trade tensions, record policy uncertainty, weak growth in Europe — with no fiscal stimulus in sight — and the continued outperformance of American markets, and the stage may be set for a new phase of greenback strength if the bulls have it right.

Even after a September pullback, the dollar is the best performing G-10 currency this quarter, and the Bloomberg Dollar Spot Index remains close to levels notched two years ago. The latter gained 0.3% at 10:19 a.m. in New York on Monday as the drone strike in Saudi Arabia rippled through markets.

The latest flow data underscore the kind of support the exchange rate is enjoying from global investors these days. Numbers from EPFR Global Data released last week show cash was piling into stocks amid the global bond sell-off, but beneath the surface it all headed one way: American equity funds attracted more than $ 17 billion in the week through Sept. 11. Shares in Europe, Japan and the emerging markets all recorded outflows.

As the trade war drags on, haven demand for the U.S. currency is likely to continue, according to Ned Rumpeltin, the European head of G-10 currency strategy at Toronto Dominion Bank. He points out there have been several false dawns in the protectionist spat, and says it’ll be no surprise if that happens again.

“The dollar remains the best house in a very bad neighborhood,” he said. “There are few places in the G-10 where the dollar can underperform.”

Analysis from JPMorgan Chase & Co. and Goldman Sachs Group Inc. shows the dollar is getting a lift from weakness in developing nations spurred by fears of a slowdown in China.

Absent a significant pick-up in risk appetite that diminishes the dollar’s flight-to-quality credentials, even fresh U.S. monetary easing would struggle to materially undercut the currency, according to Jane Foley, Rabobank’s head of currency strategy.

There remains plenty of ammo for dollar bears. The U.S. has twin deficits and the greenback is the most expensive G-10 currency based on the Bank for International Settlement’s real effective exchange rate.

One of the biggest bulls — HSBC Holdings Plc — acknowledges risks are rising to its strong-dollar call issued in April 2018. In a recent note, it stress-tested the potential impact of three scenarios: fiscal stimulus outside America, thawing trade relations, and U.S. intervention to weaken the currency. They all pose “serious negative consequences” for the greenback, HSBC said.

But nominal rate differentials matter in a world where more than $ 13 trillion of bonds globally yield below zero.

Around 60 trillion yen ($ 560 billion) Japanese government bonds with a coupon of over 1% will mature within three years and that money is likely to be reinvested in U.S. bonds where the whole curve is still positive, said Naoya Oshikubo, a senior economist at Sumitomo Mitsui Trust Asset Management. The company is one of the managers of Japan’s Government Pension Investment Fund, the world’s largest.

“The dollar will be well supported because of these flows,” Oshikubo said.

Japanese investors bought 2.47 trillion yen of U.S. government bonds in July, the most since 2016, according to the latest data.

“The dollar is still ticking a lot of boxes for a currency to be long: high liquidity, high security, high yield. Its economic situation still better than others,” said Andreas Koenig, head of global foreign exchange at Amundi Asset Management. “It’s difficult to find attractive alternatives.”

—Saudi Aramco is getting what it’s long wanted—at the expense of its IPO
—Passive investing has exploded. But fears of a bubble are overblown
—Why the next recession may feel very different than 2008
—Social Security increases in 2020 will be noticeably smaller than this year
—U.S. recession indicators haven’t made up their minds